HACKENSACK – Hours after being sworn in by former Governor Richard J. Codey, Bergen County Executive Jim Tedesco signed a memorandum of agreement that began the process of realigning the Bergen County Police Department with the Bergen County Sheriff’s Office, an issue that played a key role in his November 2014 election victory.

“This is the start of bringing two outstanding, highly professional law organizations together to enhance the security of the people of Bergen County and also save taxpayers dollars,” said Tedesco on Thursday inside the Bergen County government offices in Hackensack, flanked on each side by Bergen County Sheriff Michael Saudino and Bergen County Prosecutor John Molinelli as he signed the agreement.

The question of whether or not to merge the two police forces was a major point of contention in the recently concluded Bergen County Executive race, a contest in which taxes are always a concern.

Former Bergen County Executive Kathleen Donovan, a Republican, opposed the move, while Tedesco, a Democrat, and the majority of the Democratic-controlled freeholder board supported it. The policy fight over policing in Bergen led to a protracted legal battle, which now appears to be drawing to a conclusion.

“I would not sign this document if I was not satisfied that this will continue the outstanding law enforcement services that have been provided by officers [from the two departments] for many years,” said Molinelli. “There are parts of this agreement that frankly I think will represent an enhancement of police services. It is not just about a reduction of what it costs.”

“I too would not have my signature on this document if I felt in any way that it compromised public safety or officer safety. To the contrary, I believe that it’s going to enhance both of those subjects,” said Saudino, who noted that the county police will be renamed the Sheriff’s Bureau of Police Services. “It truly will be a significant force multiplier for every local police department when needed.”

“I’m very excited about this. I’ve been in law enforcement for 43 years, and this was spoken about 43 years ago,” Saudino, who presides over a department from which many members expressed prominent and vocal support for the realignment during the county executive’s campaign, including visible volunteer support on Election Day, added. “It’s a historical event. We all want to see this work. In no way is this a slight to the men and women of the Bergen County Police Department. The state constitution calls for a sheriff. It doesn’t call for a [county] police. There will be a pride down the line of one agency.”

“The prosecutor, the sheriff and the county executive have assured me that we have similar goals in mind and that the men and women of our department are being taken care of,” said Capt. Mark Lepinski of the Bergen County Police Department. “In this process, nobody is losing their job. Nobody is losing their rank.”

Saudino later noted that the Sheriff’s Department, which now numbers around 152 officers, will increase by 49 members over time with the addition of county police officers, according to the agreement. The county police force will shrink from its current number of 102 members as a result of attrition.

Tedesco and incoming Freeholder Chair Joan Voss, a Democrat, noted the political part of the realignment process will include the first reading of a county ordinance to enact the move on January 14. A second reading of the ordinance soon to follow will allow for public comment.

Tedesco also noted that he will establish of table of organization as part of the realignment agreement for the county police within the next two weeks to help clarify the merger process. The Bergen County Executive also said that a consultant would be hired by next month to help put the realignment plan in place, a process Tedesco anticipated will take approximately six months.

One observer at the New Year’s Day ceremony joked that the view of all of the documents being signed by multiple parties looked like a real estate closing. Tedesco emphasized that the beginning of the realignment process was the closing echo of last year’s contentious county executive campaign as well as the opening clarion call of his new administration.

“I’m keeping the promise that I made to the taxpayers and to the people of Bergen County,” Tedesco said. “The sheriff had agreed that this was something he would support. The prosecutor said that he believed that this was the right thing to do. The previous administration didn’t agree with that. I believe, as I said through the campaign, that this is the right thing to do for the people of Bergen County.” 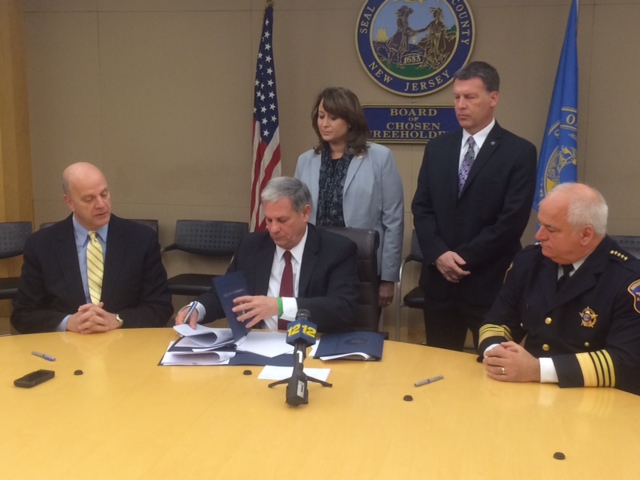