PARK CITY, Utah — At a major media event like Sundance, where a photo of Chris Pine drinking with Zoë Kravitz at the Skullcandy Lounge is considered newsworthy, a local store’s window dressing boasts a fur-lined jock strap (only $24.95!), and arm-locked lines of drunken “woo” girls pepper Main Street after midnight, the festival’s films can sometimes offer apt and badly-needed tributes to the power of the intellect.

Top of the list is Best of Enemies, Morgan Neville and Robert Gordon’s delightful account of the infamous televised debates between liberal firebrand Gore Vidal and conservative gadfly William F. Buckley, Jr., during the 1968 Republican and Democratic Conventions. Third-rated and vastly underfunded ABC News threw a Hail-Mary pass with this multi-part stunt broadcast as part of their “Unconventional Convention Coverage,” deliberately bringing together two people who loathed each other personally and politically. The highbrow head-butting and verbal jousting often left both egos bloodied and bruised; but rubbernecking viewers were riveted, rewarding the pair with sky-high ratings.

“He’s always to the right and almost always in the wrong,” said Vidal about Buckley, one of the scores of languid bon mots that the men hurled at each other sotto voce in their patrician lockjaw accents. The indecorous but Thesaurus-rich mudslinging reached its apex in Chicago, after riots in the streets led to Vidal calling Buckley a crypto-Nazi and Buckley calling Vidal a queer with a threat to punch him in “in the goddamn face.” Faces froze at the not-ready-for-prime-time language, but it was too late: for better or worse, the age of modern political punditry had been born.

The End of the Tour, Director James Ponsoldt’s latest, may not have a similar, Clash of the Titans vibe, but the true-life two-hander he recreates is just as fascinating in the way it portrays the dynamics of conversation as a mental minefield. Jesse Eisenberg plays David Lipsky, a Rolling Stone reporter and uncelebrated novelist who convinces his bosses to let him shadow David Foster Wallace (Jason Segel) on the last stop of his Infinite Jest book promotion. Tape recorder ever rolling, Lipsky attempts to understand Wallace—envying his nimble thoughts, angling to expose his weaknesses, and aching for his approval regardless. Wallace stays wary, but still warms to Lipsky, turning their Q&A sessions into reflections on the nature of representation, the seductive pitfalls of fame and the nagging doubts that success can never vanquish.

Surprisingly sweet though chronically sad, Tour is far from a hagiographic celebration of the late Wallace, playing more like a study of two brains—one wounded but electric, the other inferior and sweating ambition—circling warily in a lopsided cerebral face-off clouded by insecurities and loneliness on both sides. The fact that it’s Wallace, head handkerchief and all, will make it impossible for viewers not to let their own preconceptions about the wildly praised novelist color the movie. But Mr. Ponsoldt’s wistful drama works beautifully despite its rooted-in-reality origins. And both actors deliver beautifully empathetic performances, especially the big-hearted Segel’s deceptively layered portrayal, where even a slight head tic or eyelid flicker speaks volumes. Once again, Sundanace has proven that the most action-packed movie scenes can be as simple as two people talking in a room. 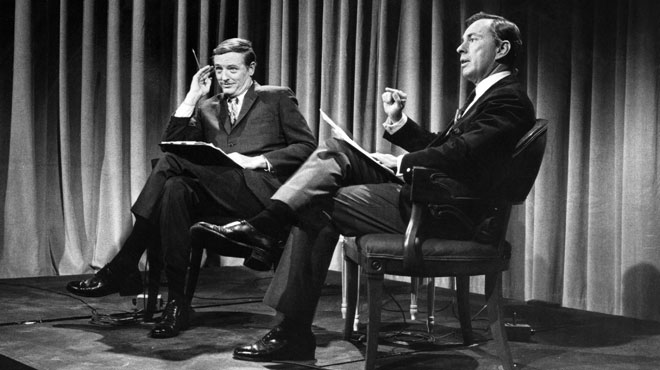