With great fanfare, Mayor Bill de Blasio held up for the cameras a tiny piece of plastic bearing his image and address—and sought to make the case that something as bureaucratic as waiting in line for a government identification card could be, using a favorite word, “transcendent.”

“This I.D. address substantially the notion that we all matter and everyone has an identity,” Mr. de Blasio said in the Flushing branch of the Queens Library.

Mayor Bill de Blasio today rolled out the city’s new municipal identification cards at the large library, where dozens of people lined up the get the form of I.D. that will be available to undocumented immigrants—as well as the homeless, the elderly, transgender people, and any other New Yorkers that might want to access some of the perks that come with signing up.

After weeks of somber press conferences surrounding his difficulties with the city’s police department in the wake of the murder of two officers, the event was a chance for Mr. de Blasio to be active rather than reactive—to proudly tout a progressive priority of his, a promise kept from his State of the City address, when he first floated the idea.

The mayor grinned as he showed off his own I.D. card, but his smile was even broader when he listened to an undocumented immigrant, named Esther, describe what the I.D. would mean to her in Spanish, with Council Speaker Melissa Mark-Viverito translating. When she was finished, Mr. de Blasio pulled from his lapel pocket Esther’s brand new I.D. card. “Tell her she won’t have to wait in line,” he said, handing her the document and giving her a hug. Ms. Mark-Viverito, who has made immigration issues a priority of the City Council, looked on, beaming.

The cards will help those without access to I.D., like undocumented immigrants, to access checking accounts at 10 major financial institutions, to enter hospitals or city schools their children attend, and to access other city services. Without I.D., these services can be hard to access—Queens Borough President Melinda Katz recalled not being able to enter her child’s school because she didn’t have her I.D. with her.

“My child was in that school and I couldn’t get in because I didn’t carry a pocketbook and a wallet,” she said.

But the program is not without its critics—including those who are supportive of its goals to help immigrants. Groups like the American Civil Liberties Union have said they are worried the I.D.s could amount to a database of undocumented immigrants, putting people seeking legitimization instead at risk of deportation.

Mr. de Blasio said protecting privacy was a real concern, but didn’t outweigh the good the I.D.s could do.

“We should not let those legitimate challenges and complexities stand in the way of solving people’s problems, but we believe we’ve done it in a way that is respectful and careful and obviously very calibrated to the law,” Mr. de Blasio said.

The law requires that the information collected for the I.D. cards will not be shared unless “legally required,” and calls on law enforcement to have a judicial warrant or a subpoena before accessing the records. While New York City does not seek out undocumented immigrants for deportation, many in the Republican Congress have called for a harder line on immigration—and so too could a future president.

But Mr. de Blasio said under many different presidents, Republican and Democrat, the city has been able to maintain its own “very substantial rights.”

“I don’t see a scenario where a change in Washington would undermine our rights to respect and protect our people,” Mr. de Blasio told the Observer.

Immigration Affairs Commissioner Nisha Agarwal noted that even knowing someone has a municipal I.D. would not indicate they are undocumented immigrants, since the I.D. is available to all New Yorkers.

Still, some of those documents used to apply for the I.D.s—which can include current or expired foreign passports that could indicated someone is undocumented in the U.S.—will be kept on record, which is what has sparked some of the concern among civil rights groups. But Ms. Agarwal emphasized those records could only be accessed with judicial authority, and noted that the law outlining the program calls for a review in of those records in two years.

“If things really go haywire in D.C., we have the ability to change our program if we need to,” she said.

New Yorkers must prove both their identity—using a document that includes their photo—and their residency in New York City. Ms. Agarwal was confident the groups being targeted by the program, such as undocumented immigrants and the homeless, could produce the necessary documents, saying the city conducted focus groups in creating its requirements.

To avoid a situation in which only undocumented immigrants apply for the card, which could create a stigma and make some unwary about the I.D.s, Mr. de Blasio’s administration has rolled out many perks for all New Yorkers who sign up—including yearlong memberships to cultural institutions like the Bronx Zoo and access to all three of the city’s public library systems.

“I think that’s going to take away the notion that this is for some small subset of our population,” he said. “I think it’s become much more universal.” 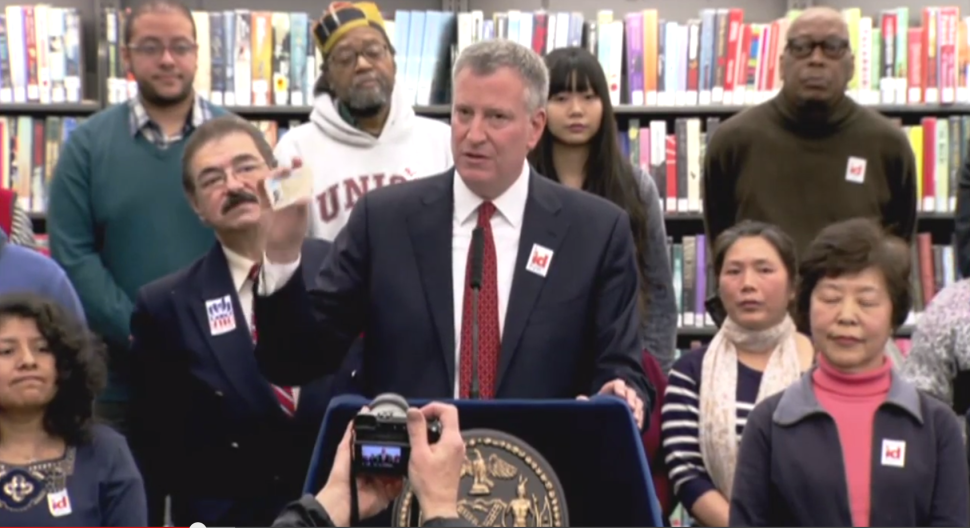