Mayor Bill de Blasio said today that the recent terrorist attacks in Paris would be the “clarion call” that eases tensions between his City Hall and the NYPD.

Mr. de Blasio, speaking with reporters at an unrelated press conference in Queens, claimed the deadly attacks on a satirical French newspaper and subsequent hostage sieges would unite New Yorkers and help them to “move forward” from the policing-relating controversies of the past month.

“It’s obvious that the events in Paris of the last few days are a clarion call to all of us to unify and move forward because we have to protect the people in this city and the values of this city and this country,” Mr. de Blasio said.

“And I think our men and women in the NYPD are absolutely motivated to do good and believe in protecting those values and you’re going to see a constant improvement in the dynamic if we all work at communication and understanding,” he said. “I certainly will.”

A series of events, as Mr. de Blasio noted, helped to worsen the relationship between his administration and the NYPD, as well as minorities and the police. A Staten Island grand jury failed to indict a white police officer in the death of Eric Garner, a black man, sparking mass protests here and nationwide. Mr. de Blasio, aligning himself with Rev. Al Sharpton, expressing sympathy for the protests and minorities who feel targeted by police, angered union leaders and rank and file officers.

After two police officers were murdered last month, cops turned their backs on Mr. de Blasio three separate times. Over the last two weeks, the number of summonses written have plunged at precincts across the city, leading to allegations of an illegal slowdown.

Police Commissioner Bill Bratton conceded Friday a slowdown has been underway, but insisted it was ending. The rift between the police, who feel Mr. de Blasio doesn’t support him, and City Hall shows no immediate signs of closing.

“We’re going to continue the work we came here to do of bringing police and community together because there’s a lot of unfinished business there,” he said. 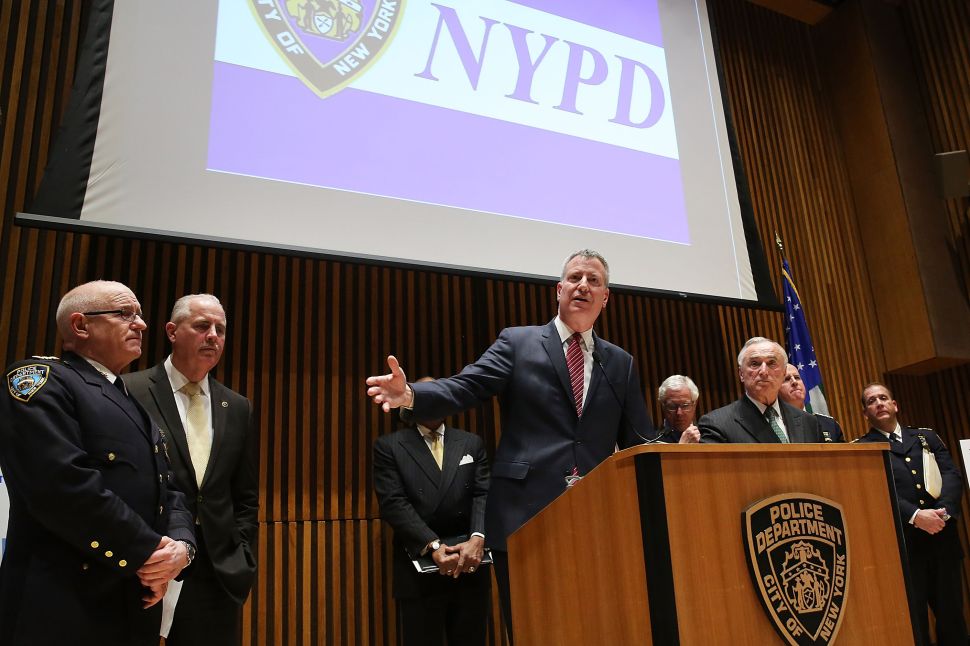