High rates of heavy drinking among college students are a well-studied fact. National research surveys conducted between 1999-2010 reveal startling numbers like “45 percent of college students binge drank in the last month” and “23 percent are frequent bingers” (heavy drinking three times in the last two weeks). The facts get more troubling with annual “alcohol-related unintentional injury deaths” close to 2,000 (yes, deaths), 500,000 annual injuries, and a slew of other “risky behavior” problems: unprotected and unplanned sex, aggression, sexual assault, driving under the influence, and academic problems to name a few. A particularly disturbing statistic is the finding that “frequent bingers” are 10 times more likely to experience four or more of these consequences. That’s a lot of trouble for a young adult.

The fear and confusion that these facts evoke for parents leads some to dismiss the dangers: We all did crazy things at that age. Others adopt hyper-vigilance, known as “helicopter parenting.” The middle ground of staying educated, involved and alert to warning signs without panic or dismissal is challenging—and incredibly important. But what is that middle ground?

The short answer: consistent and positive communication. Consistency, accountability and good modeling all decrease the chances that drinking will go from occasional and mild to habitual and dangerous. With children’s independence and peer influence increasing over time (appropriately so!), the remaining points of parental influence are all the more important to focus on and utilize to the fullest.

Staying constructively involved with your college-aged child means having enough contact that healthy behaviors are supported and any warning signs of possible alcohol mismanagement are detected early (e.g., lower grades, reluctance to talk with you, in trouble at school or with authorities, noticeable mood changes). Parents have to be willing to talk: to talk about your perceptions (“You seem really exhausted whenever we talk”), to ask questions (“How do your friends think about drinking?”), to show concern (“Dad and I would like to come visit for a night”), and to “be the parent” and ask for accountability (“Your allowance will decrease if you start using it for alcohol”).

It’s also helpful to understand that certain personality traits, as well as certain ways of understanding the college environment, put your child at greater risk of alcohol abuse. Sensation-seeking kids and impulsive kids are at greater risk for heavy drinking in college. Additionally, teens who perceive others drink more than they do, that others are not so bothered by drinking, and last, feel that drinking in college is a positive “part of college life” are more at risk for heavy drinking.

New York parents in particular may assume their kids have had a worldly education in managing pressures, risk and temptations simply by having grown up in the big city. But is it really true—if your teenager experiments with alcohol and marijuana in high school, will they be less likely to engage in substance abuse in college? Certainly if you ask many high schoolers, they will tell you that they’re in less danger if they can “hold their liquor” or “handle” drugs. Should this be reassuring?

No. Significant research finds that teens who drink and take drugs in high school are at higher risk for expanding their substance repertoire in college.

The capacity to drink someone under the table might be a badge of pride to some teenagers, but it is a risk factor for developing problems with alcohol in college. Having a low tolerance for alcohol means that your body sends you signals that too much is too much: Nausea, vomiting, headache, blacking out. And those physical warning signs spur behavior change for most people. A high tolerance means that your “over-drinking” signals are at very least not as severe and therefore less likely to influence behavior in the future. In other words, if binge-drinking episodes don’t result in any negative consequences, there is a much higher likelihood they will be repeated.

Maybe your new college student knows all this? Wouldn’t education about the risk factors for binge drinking and the methods for addressing it be included in the curriculum? Probably not. And if it is included, it’s often in an impersonal, vague way that is a set-up for your child to feel “yeah … but I’m not like that.”

For example, DARE-like programs convey ineffective scared-straight information about drunk driving statistics (which of course, non-driving New York kids routinely ignore). Girls may hear messages about avoiding drinking from glasses they haven’t had their eyes on and boys may hear the dangers of assuming sexual assent when one or both parties are intoxicated. Wise advice. But does your child know how much they can drink before being legally intoxicated (blood alcohol calculations)? Do they know what’s considered a “binge” (four or more drinks in a sitting for a woman and five or more drinks for a man)? Do they know that drinking to manage feelings puts them more at risk for developing bad habits with alcohol? How about methods for moderating drinking? Most colleges don’t want to educate kids about moderate drinking because that might be publicized as allowing underage people to drink. As people footing the tuition bills, parents can encourage age-appropriate approaches to education and therapeutic interventions.

Kids, and others, drink for real reasons, whether it be thrill seeking, social discomfort, wanting to “hook up”, thinking that “everyone else drinks like a fish,” or a variety of seemingly reasonable reasons. Society generally doesn’t want to talk about these motivations because it feels like it somehow excuses the behavior. But understanding is not condoning. As parents with leverage, there is an important and useful alternative path to condoning: understanding, empathy and accountability.

If stress seems to lead your kid to drink, then activities to alleviate this should be supported—financially and otherwise. If peer contact drives substance use, you can support structured extra-curricular activities including exercise. The power of understanding what drives the behavior and empathy should not be underestimated. These things combined with good communication skills can increase positive parental influence. As for accountability, maintaining consistency with the approach of parenting and contingencies that were used through high school can be very helpful. For instance, if privileges or allowance are lost for bad behavior in high school, these consequences can be continued into college. Setting limits, even for 18-year-olds, is incredibly helpful as we now think of adolescence as a much longer period—brain development, especially the part of the brain that drives wiser decision-making, is not complete until about 26 years old.

Understanding, empathy, positive communication—rather than confrontation and blaming—problem solving, openness, limit setting and consequences (including positive ones) are all tools for parents of a young adult. By spending time understanding the behavior, you can intervene in a constructive way to the benefit of your child, and yourself. To quote a Scottish proverb: “They always speak of my drinking, but never of my thirst.” 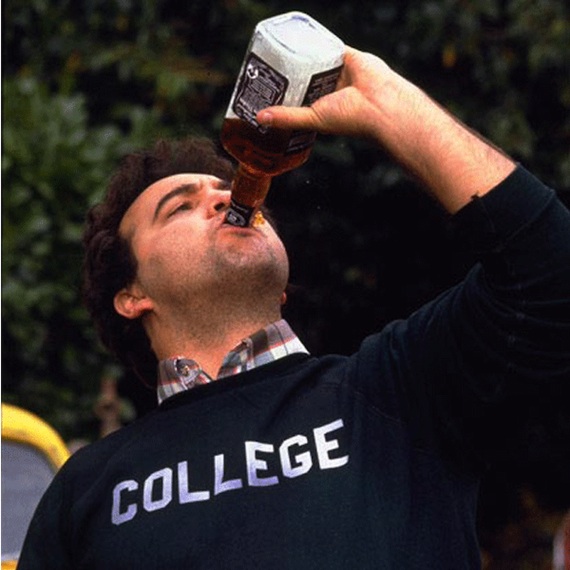