Bronx Borough President Ruben Diaz Jr. and Brooklyn Councilman Rafael Espinal today rolled out proposals for a letter grading policy for beauty establishments and for a “Salon Customer’s Bill of Rights”—both of which will need approval from Albany.

The new set of regulations for spas, barbershops, nail salons and hair stylists would create an inspection and assessment system similar to that used for restaurants, and obligate cosmetology professionals to attend new safety courses, to put their credentials on display and to regularly sanitize their stations and implements. Mr. Diaz said he was inspired to propose the rules after his wife’s aunt suffered a severe infection on her big toe following a pedicure.

“We went from trying to have a wonderful family reunion to having to go to the emergency room,” said Mr. Diaz, noting that beauty workers apply sharp and potentially dangerous instruments to their patron’s bodies. “Looking at what’s happening at restaurants across the city of New York. I said, ‘Why not have this industry, which for all intents and purposes are performing minor medical procedures, why not have them letter grades, consumer rights and training?'”

Mr. Espinal, chairman of the Committee on Consumer Affairs, said he was on his way to get a haircut when he got the call from the Bronx borough president about suggesting possible new cosmetology rules.

“I thought, it would be great to know that the blade they are using on my head is being changed and that sanitary products are being used,” said Mr. Espinal.

Salons, however, fall under the purview of the New York State Division of Licensing Services, and the city would need the state government to grant it power over such establishments. Mr. Diaz said his bill has support in the Assembly and State Senate, but the Republican leadership of the Senate has been reluctant to cede any power to the Democrat-dominated city.

Senate Majority Leader Dean Skelos’ office did not immediately respond to a request for comment. 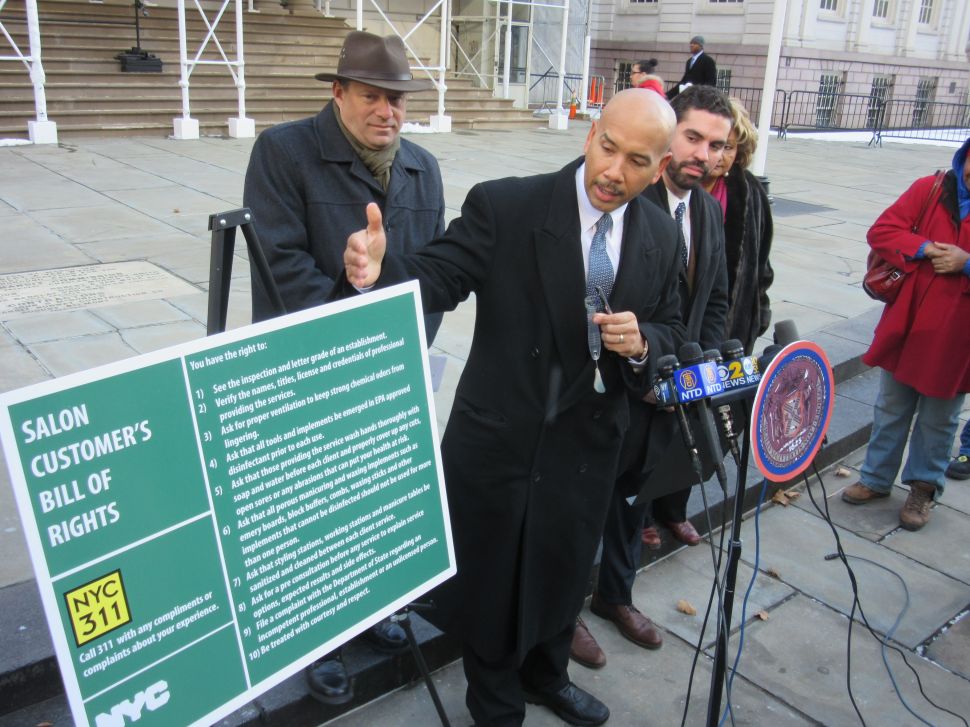