Assemblyman William Colton, a southern Brooklyn Democrat, is joining a couple of Democrats who are mulling running in a special election to replace Mr. Grimm, who pleaded guilty to a single felony tax evasion charge in December. Mr. Grimm, previously professing his innocence, had won re-election against Democrat Domenic Recchia Jr.

“Yes, I am definitely seriously considering a run. I’ve been approached by a lot of community people, community leaders,” Mr. Colton told the Observer. “They are very disgusted by the fact that there was no substantive discussions of issues [in the Grimm Recchia race.]”

Mr. Colton said he had met with two of the other Democrats considering campaigns, former Congressman Michael McMahon and Staten Island Assemblyman Michael Cusick. Once Gov. Andrew Cuomo calls a special election, the Staten Island Democratic Party will choose a nominee to take on the candidate from the borough’s GOP organization.

Though the district includes a chunk of southern Brooklyn that Mr. Colton has represented since 1997, the county organizations in Staten Island, a large majority of the seat, will decide who is nominated to run. Mr. Colton does have a significant following in his Bensonhurst and Bath Beach district and is closely aligned with Councilman Mark Treyger, who represents a neighboring area that includes more of the 11th Congressional District.

But Mr. Colton, who said he would give Congressional Medals of Honor to the two recently slain NYPD officers if he went to Washington, faces an uphill battle even if he wins the nomination. Brooklyn-based elected officials like Mr. Recchia, a former Bensonhurst and Coney Island councilman Mr. Colton openly reviled, have repeatedly failed to run competitive races in the district.

Mr. Colton would also face long odds to even win the nomination from Mr. Cusick, a current favorite, or Mr. McMahon. Both have Staten Island roots.

Mr. Colton, however, is undeterred. He singled out Hurricane Sandy recovery and struggles over trash disposal–people in his district are currently trying to shut down a planned trash transfer station–as at least two unifying issues for people on both sides of the Verrazano-Narrows Bridge.

“What people are looking for here is somebody who is going to speak up and talk about the issues they believe in: a better Brooklyn, a better Staten Island. There are many common issues between Brooklyn and Staten Island,” Mr. Colton said. “Many children and grandchildren of my constituents in southern Brooklyn live in Staten Island.”

The Republican establishment is coalescing around Staten Island District Attorney Daniel Donovan as the nominee. Assemblywoman Nicole Malliotakis is also seeking the nomination. 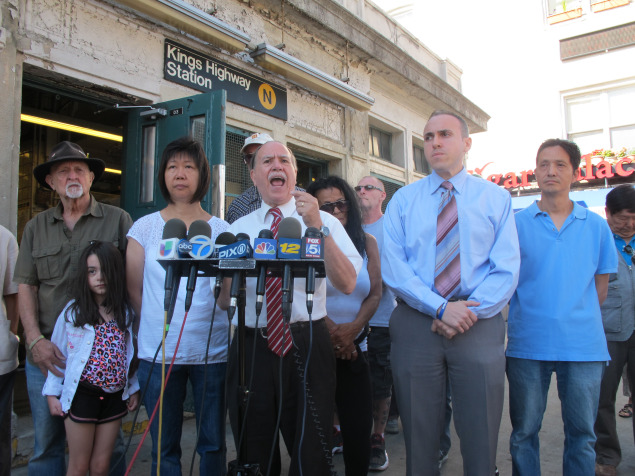