Q: What does today’s Republican Party call a man working to ban abortion and roll back gay rights?

A: Mr. Chairman, of course.
(Trenton, NJ) — Congressman Chris Smith recently broke from his busy schedule controlling the outcome of every pregnancy in America to “not construe homosexual rights as human rights.”

And just like that, Rep. Smith, 61, confirmed that his GOP just. can’t. stop. talking. about. abortion. and. gays. And that no matter what their platform (jobs, the economy, Obamacare, whatever) the GOP always finds itself back in their familiar anti-gay, anti-choice crouch. It’s like a drug for these guys to – no matter the context – bring it all back to abortion and gays even if the topic is, oh I dunno, the Nigerian terrorist organization, Boko Haram. That was the case on Tuesday when Congressman Smith made his unfortunate remarks.

Smith’s actual comment went like this: “I am a strong believer in traditional marriage and I do not construe homosexual rights as human rights.” He went on to muse whether “the (Obama) Administration’s views on LGBT rights affected or hindered our support for Nigeria to defeat Boko Haram.”  In Chris Smith’s world we don’t construe gays rights with human rights, but we do conflate supporting gays with somehow enabling terrorism.

One of Smith’s (gay) colleagues, Congressman David Cicilline, was on that committee and I’d love to know what Cicilline was thinking at that moment. (His office declined to comment.)

Contrary to Smith’s throwaway line, gays in Africa have much bigger challenges than “homosexual marriage.” In many African countries, including Nigeria, Uganda, and Rwanda, it’s illegal just to be gay. Marriage is nice, but gay Nigerians face more pressing, existential crises in their day-to-day lives. And Chris Smith outta know that. In fact, just as Smith was gaveling in last Tuesday’s hearing, “religious authorities in Nigeria detained 12 people accused of holding a ‘gay wedding.'”

(Apparently the anti-gay features of Boko Haram’s Sharia law have some currency within mainstream [Sharia-loathing] Republican party politics. Chris Smith just proves it. How ironic is that?)

If you’re not familiar with Chris Smith, he’s the dean of the NJ Congressional delegation who serves on the House Foreign Affairs committee and chairs the House Subcommittee on Human Rights. So when this guy talks about Human Rights, people listen.

Chris Smith is also, literally, the most anti-reproductive choice politician in the country. I know the word ‘literally’ gets thrown around a lot these days, but Congressman Chris Smith literally wants to tell the rest of us when we can start (or grow) our family. No abortions ever, every single pregnancy in America must result in a baby.

Chris Smith also has a long history of fighting progress on gay rights. From HIV funding and prevention, to gay marriage equality and adoption, Chris Smith never misses an opportunity to spread his “traditional” message if anti-gay intolerance. Smith’s latest comments that America’s global human rights objectives make us vulnerable to Boko Haram are simply a new low, even for him.

But I don’t want Chris Smith to apologize to gay people for saying stupid stuff. Now that it’s 2015 I pray Chris Smith (and his ilk) keep sharing their retrograde views whenever they can, as loudly as possible. Because every time they open their mouth, LGBT rights takes a big step forward.

Jay Lassiter is a gay rights activist living in Cherry Hill, NJ with his partner of 12 years. A long-time Trenton iconoclast, Jay is best know for his work ending NJ’s death penalty and legalizing medical marijuana in the Garden State. Jay recently made a $100 contribution to Planned Parenthood in Congressman Chris Smith’s name. 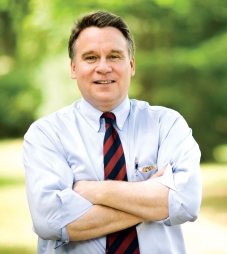