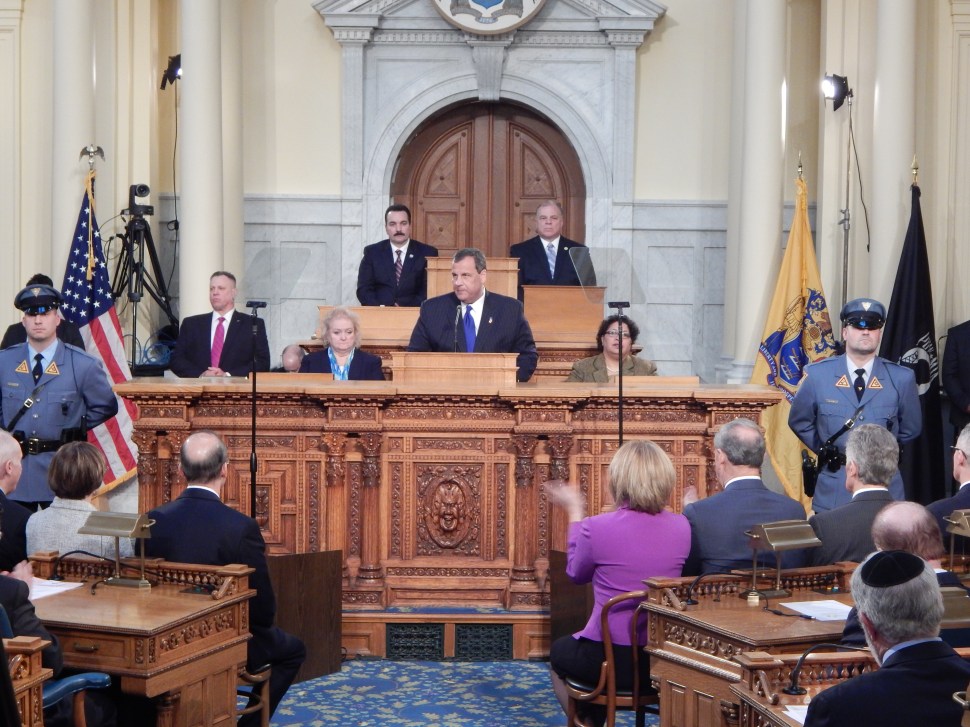 TRENTON – Pawing at a national-sized runway in advance of a 2016 presidential bid with Fox News and CNN in the room, Gov Chris Christie consigned those unnamed statewide critics to the “overly partisan corners of this chamber” as he struck out at nailing broad Republican chalk points, throwing early elbows in his State of the State Address at Washington. D.C. and “big government.”

While attempting to deflect those criticisms of himself to unfair criticisms of a long defamed State of New Jersey, Christie patted the legislature on the back (“I want to congratulate you [for bipartisanship.”) and, in the midst of scalding Bridgegate headlines and blow back from his relationship with Dallas Cowboys pooh-bah Jerry Jones, intently stayed focused on the positive.

“The state of our state continues to get better,” said the fledgling GOP presidential candidate. “Certainly far better off than five years ago.”

Inflating the legislature in one breath, the governor just as fast blew a raspberry at a long history of New Jersey failure (“the sins of the past”), while throwing an early bone to the South and maintaining throughout a mantra of the need for lower taxes.

“New Jersey just lost Mercedes Benz USA to the state of Georgia,” he said. “Mercedes, in New Jersey since the early 1970’s, is leaving for a very simple reason — it costs less to do business in Georgia than it does in New Jersey. Don’t take my word for it — the leaders of Mercedes said it themselves. Economic incentive laws help — but lower taxes are better. We will not win the fight to keep and create good paying jobs for our middle class families in New Jersey unless we lower taxes.

“Yet I cannot make this a reality alone,” he added. “It is you, and only you, the State Legislature, who can lower taxes further and make New Jersey more prosperous for our middle class families and their children.”

As expected, Christie targeted the public pension system as that primary area where he intends to build on those alliances that worked in the past to attain more success.

Christie prospered politically by getting on the side of Building Trades unions and isolating public unions.

Will that tactic work again?

He sounded confident in today’s speech.

“The pension fund’s problem is a long-term one,” Christie declared. “And it is related to every other program in state government. Right now the $90 billion unfunded liability for pensions and health benefits is three times the size of the annual state budget. Think of this way — in order to close the current shortfall in just the pension system alone every family in New Jersey would have to write a check for $12,000.

“That is the nature of long-term entitlements which grow faster than the economy, and in that regard our problem here in New Jersey is not that different from Washington’s entitlement problem,” he added.

The speech offered a bold declaration – but no details.

Christie’s play to a national audience did not diminish those statewide players attempting to make use of their own theatrical devices. 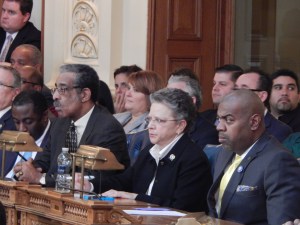 As Christie heaped praise in his speech on Camden Mayor Dana Redd (“an outstanding leader”), Newark Mayor Ras Baraka surprised some in attendance with an appearance in the chamber alongside ally and veteran state Senator Ronald L. Rice (D-28) (pictured below left, with Baraka).

Baraka is not an ally of this governor.

Without naming names, Christie threw down a challenge to those mayors not named Redd, while cleaving to his narrative of bipartisan leadership in action. “If you put down your sword of partisanship, we will rebuild your cities, the way we’re rebuilding Camden,” the governor announced.

“There is still a ton of work left to be done, although you can start to see the transformation taking place if you walk down many streets in Camden today,” he said. “Developers are building market rate housing that is selling for more than $200,000 a unit, new schools are being built, businesses are populating the landscape and children are playing in our parks without the fear of becoming a victim of crime. It is clear that the city and one of the oldest settled counties in the state are seeing an unparalleled revitalization that will carry the region for decades.” 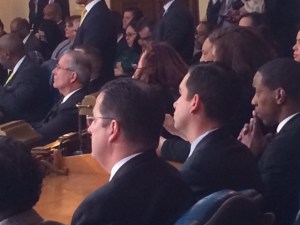 By the end of his speech, Christie was elsewhere, seeking to trumpet his own story in the face of an animated early candidacy by former Florida Governor Jeb Bush.

“We are a nation beset by anxiety. Americas leadership is called into question because of a pattern on indecision,” said a bold-stroking Christie. “This anxiety was the most palpable emotion I heard and felt I heard it Kansas.”

Then he cited a Florida woman as he worked a rope line, apparently turning his much criticized absence as chairman of the Republican Governors’ Association (RGA) into an epiphany.

“She said, ‘Governor, ‘I’m 82 years old,'” Christie said. “What’s happened to our country? We used to control events. Now events control us. Right now, we have the tools to control that anxiety and not give into us.”

In the midst of constant rumors about him potentially leaving office early to put all of his attentions on a presidential run, he cracked a joke

“I’ll be standing here in one year,” said the governor, who at the finale doubled down on his commitment to “New Jersey’s renewal.

“Today, Chris Christie called for a ‘New Jersey renewal,'” Sams said. “After five years with Christie as governor, lord knows New Jersey needs one. The highest property taxes in the country, employment lagging the nation, a record eight credit downgrades – that’s the real state of the state under Christie, and it’s the record he’ll have to run a presidential campaign on. What’s worse, instead of tackling these issues, Christie’s taking off tomorrow for South Carolina before jetting to Iowa on Friday. Simply put, it’s clear what Christie’s priorities are: boosting his national ambition at the expense of the people he was elected to serve.” 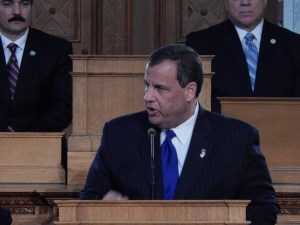 Other oratorical punches started whizzing in via email as soon as Christie finished his speech.

“Today in his State of the State speech Governor Christie used lofty language calling for a New Jersey and American renewal, clearly aiming his speech at national media and national voters, instead of dealing with the true state of New Jersey,” she said. “Perhaps having spent more than a third of last year out of state he just isn’t tuned in to the economic realities of most New Jersey’s families.

“The Governor’s real record includes a dismal economic recovery that leaves us lagging well behind our nearest neighbors and the nation as a whole, and with an unemployment rate 10% higher than the national average,” Salowe-Kaye added. “New Jersey is  one of only three states where the poverty rate actually went up last year, and over a third of our residents are struggling just to get by.  The Governor has defunded education and put retiree’s pension benefits at risk in order to protect tax cuts for millionaires.  He’s borrowed against our future, leading to credit downgrades while giving away $4 billion to corporations. This is the state of New Jersey under Chris Christie.  National voters should pay attention and not be swayed by lofty language.” 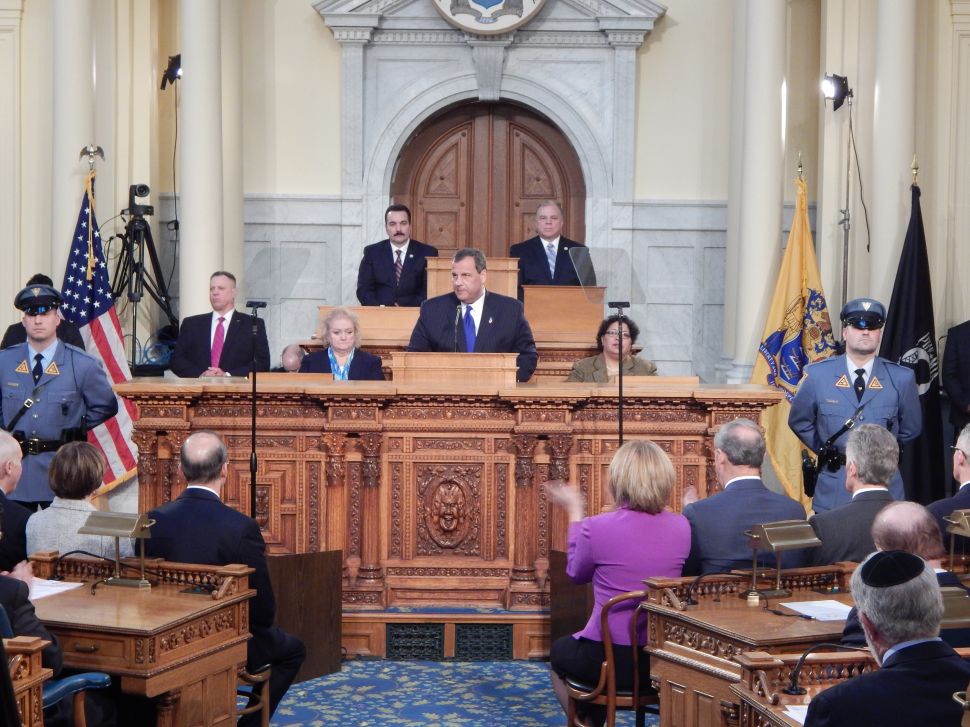