Members of the City Council slammed popular home-sharing website Airbnb today for saying it has no idea how many of its New York City apartment listings violate state law.

“I understand if you believe that the law is wrong. I do not understand why you’re not doing anything to find out whether people are following the law,” Councilman Jumaane Williams, chairman of the Housing and Bulidings Committee, told a top Airbnb staffer during a marathon hearing today.

The packed hearing of the housing committee on short-term rentals focused almost entirely on Airbnb, with testimony from outraged tenants, residents who list their homes on the site, angry lawmakers and the website itself. But the back-and-forth led to little resolution.

“What we saw today so far is really more of what we’ve seen the last year and a half, which is that we’re talking past each other,” David Hantman, head of global public policy at Airbnb, said.

Council members repeatedly insisted the site’s listings meant a headache for neighbors, often violate state law, and lead landlords to take already scarce housing off the rental market to use as lucrative illegal hotel rooms, worsening the city’s affordable housing crisis. Mr. Hantman, meanwhile, insisted that most people listed their apartments only occasionally, such as when they’re on vacation, in an effort to help pay the rent. But he vehemently opposed the suggestion that the site limit more frequent renting.

The state’s multiple dwelling law makes it illegal for a resident to rent out their entire apartment or house for fewer than 30 days using a site like Airbnb, though it is legal to rent out a room if the primary resident is also home. Last year Attorney General Eric Schneiderman estimated that more than two-thirds of the listings in the city were illegal, and more than a third of them were operated by commercial enterprises rather than homeowners.

Mr. Hantman insisted those figures were incorrect, but said the company does not do its own research on which listings are illegal.

“Wouldn’t that be something a responsible company would do, if they want to keep operating in New York City?” Mr. Williams asked, adding that the company does a great deal of research about other aspects of its listings. “Why would the one thing that makes the most sense, which is whether it’s legal or not, be the thing you’ve done the least about?”

Mr. Hantman said the website tries to educate its hosts about the laws in the city. But he also repeatedly defended the idea of a host renting out an entire primary residence when they’re out-of-town for a few days, despite it being against the city’s laws. Councilwoman Helen Rosenthal in turn asked him if he’d be willing to limit the site’s services to his repeated example—hosts listing their apartments just once a year, while they’re on vacation.

“We believe very strongly that you should be able to rent your own home whenever you want,” he replied.

Ms. Rosenthal repeatedly pushed him to offer up information about how many units may be illegally listed—arguing it could be tallied by looking at which hosts on the site list full residences, or more than one unit in a building. Mr. Hantman in turn asked if information about hosts would just be used to tax them.

Mr. Hantman sought to shift the conversation to whether it really ought to be illegal for a homeowner to occasionally rent out their entire home, or whether laws should be enforced in those cases—saying such hosts had been assured in 2010 that they would not be targeted by a change in state law meant to go after illegal hotels. In San Francisco, the company was able to sway lawmakers to make changes essentially legalizing its business model, but that seemed unlikely in New York today, where the politically active Hotel Trades Council is also a powerful foe of sites like Airbnb.

Assemblyman Richard Gottfried, who with State Senator Liz Krueger passed the amendment to the state housing law in 2010, said that while the state may not go hunting for occasional Airbnb hosts, what they are doing is still illegal, should remain illegal “because of one word: neighbors.”

The Council also expressed frustration with Mayor Bill de Blasio’s administration for not more aggressively going after the industry, either with pro-active enforcement or with sweeping investigations like Mr. Schneiderman’s.

The Office of Special Enforcement responded to 1,150 complaints to 311 about illegal hotels in 2014, Criminal Justice Director Elizabeth Glazer said. It conducted 883 inspections, and 495 Environmental Control Board violations and 391 Department of Buildings violations were issued.

Council members insisted that paled in comparison to the number of illegal units people have tallied in the city. They urged the addition of more inspectors, while Ms. Glazer insisted the city is “doing a pretty efficient job right now.” But the city does not go after sites like Airbnb—just the people listing the properties.

“Why is the Attorney General, why does he have the ability and not us? Because its our money that we are losing in this city, and it’s hurting workers,” Councilwoman Elizabeth Crowley said, referencing hotel taxes. “Why can’t our city, our administration be proactive? Why can’t we do more to stop this?”

A spokesman for Mr. de Blasio, Wiley Norvell, said the city works to mainly target hosts who operate multiple units as illegal hotels in its enforcement, as opposed to those sometimes hosting in their own units—but said making the latter legal would make it much more difficult to stop the former from happening. The OSE has access to findings of other city inspectors in other departments to help build cases against illegal hotels, he said, and with new technology will be able to add even more capacity for enforcing the laws without adding more staff. 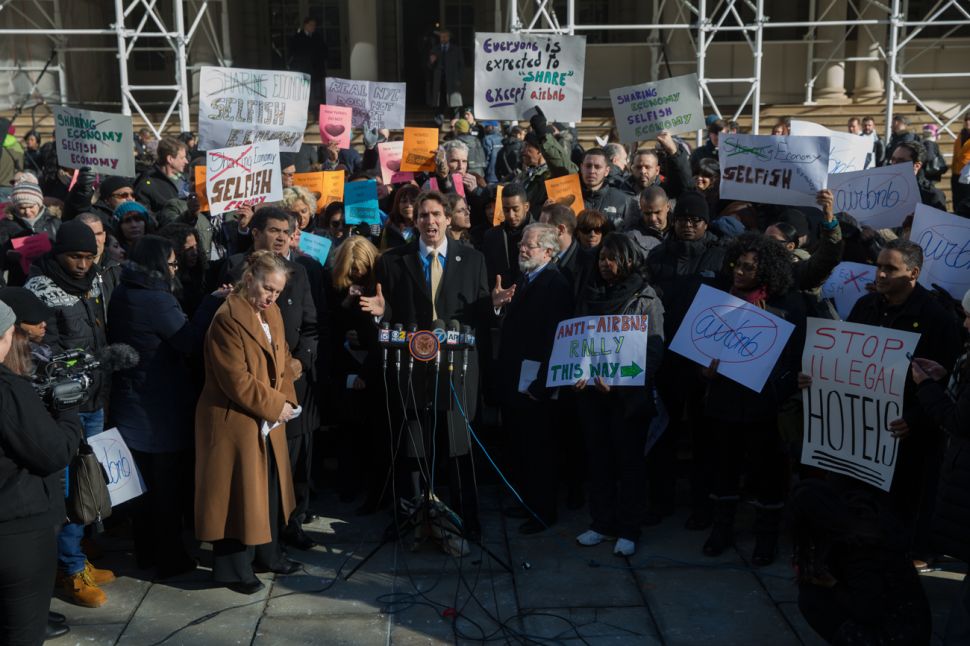