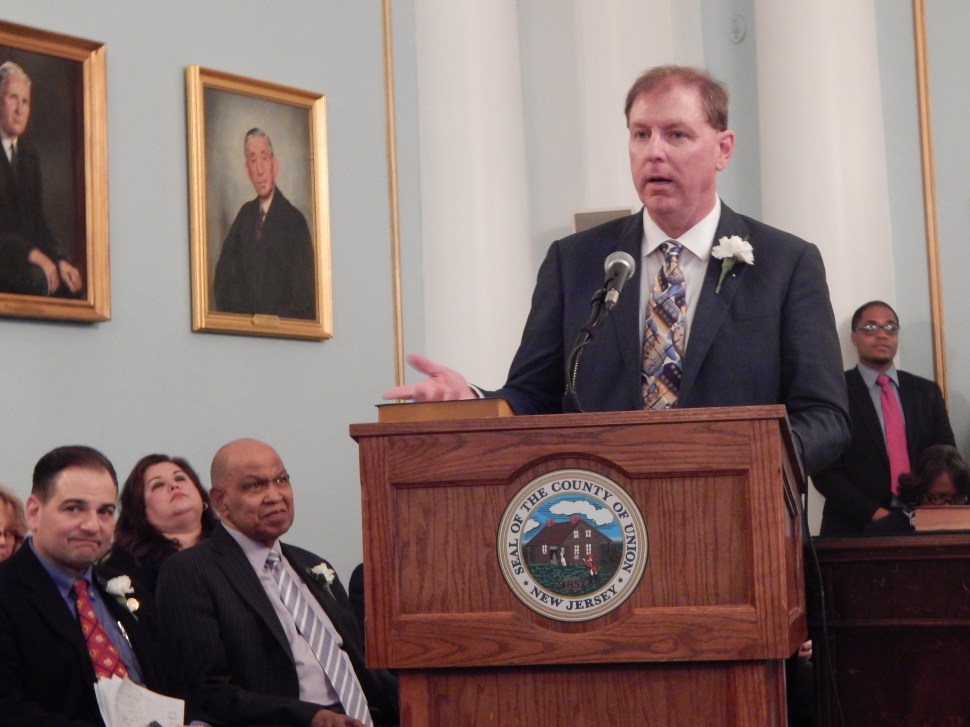 ELIZABETH — An exclamation point was tagged onto the legacy of one New Jersey’s oldest political families this morning, when one of Trenton’s better known pols — following almost in lock-step with his father — formally departed his longtime seat in the Assembly and joined the world of criminal investigations, blue uniforms, and extraditions.

It was a bittersweet moment, no doubt, for the friends and family present at Union County’s reorganization meeting, which saw a now-former Assemblyman Joe Cryan (D-20) sworn into his new post as head of the county sheriff’s department. Hundreds turned out for the ceremony, held in a sweltering atrium inside the big stone courthouse off Broad Street in this 130,000 resident city, and praise for the respected Democrat was in plenty of supply. 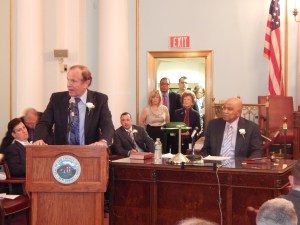 “Union County’s gain is certainly the legislature’s loss,” said one of Union County’s own political protegees, state Sen. Nick Scutari (D-22), at the podium at the head of the room.

Cryan’s ascent in the legislature — and eventual decision to depart it last year, somewhat to the chagrin of his fellow pols and insiders who saw him destined for other callings — has been well-documented. The son of the late John Cryan, an Irish-born and later Essex County-based pol whose own career bears a striking resemblance to that of his son’s, Cryan entered the Assembly in 2002, serving once as a state Democratic Party chairman, for many years as undersheriff in Union County, and now as sheriff, following the death of revered Union County Sheriff Ralph Froehlich.

News of Cryan’s planned departure of the Assembly to run for county sheriff after Froehlich’s death was one of the bigger surprises of 2014 politics, and those details — both describing the legacy of the late John Cryan, as well as that of Froehlich’s — loomed large over today’s ceremony, which saw other Union County figures offering their own remarks and well-wishings.

“The people of Union County did not vote for [Cryan] to fill the shoes of Ralph Froehlich,” said Union County Surrogate James LaCorte. “They voted for Joe Cryan for Sheriff. Ralph has his own legacy. It’s time to make yours.”

“[Joe Cryan] is truly a man of the people who speaks what he believes. He is truly a person with Union beliefs,” added Scutari. 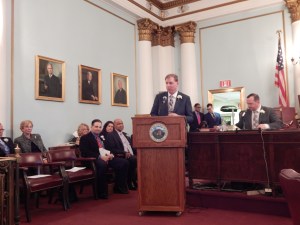 During his turn at the mic, Cryan said his father “helped keep me grounded in life, blazed a big path,” and later laid out his own plans for the sheriff’s department, where he’ll serve a full three-year term and be responsible for the half-a-million-resident county’s courthouse security and transportation of prisoners, service of criminal and domestic warrants, and extraditions, among other things.

“With new days and new changes and new leadership comes new vision, and we in the Union County Sheriff’s Office celebrate our success and want to build on it,” Cryan said, adding the office has already undertaken reviews to increase employee productivity, change hiring practices, and implement K-9 sweeps of county facilities. “In fact, we want to create a culture of expectation of excellence. We’ve tried that, and we’ve done that already.”

Cryan’s swearing-in was undoubtedly the center of attention — but like other county reorganization meetings that invariably follow the new year, the ceremony was buttressed by larger, statewide optics.

On New Year’s Day last week, those optics included the political maneuvering of two gubernatorial contenders, Jersey City Mayor Steve Fulop and Senate President Steve Sweeney (D-3), who found themselves vying for the same spotlight on a stage at Essex County’s own reorganization ceremony. They could be found separately, too, last week, Sweeney at Gloucester County’s and Fulop at Middlesex County’s meeting Friday night, and Fulop again at Bergen County’s tonight with newly-minted Executive Jim Tedesco.

Fulop and Sweeney have no doubt been the most public in their pursuit of the top executive’s seat, courting powerful connections over the last several months and dumping loads of cash into politically profitable campaigns across the state.

This time, however, it was Assembly Minority Leader Jon Bramnick (R-21) and Assemblyman John Wisniewski (D-19), two lower-key candidates said to be after the governor’s seat, who sat sweating in the tropics-level heat of the room next to the Union County courthouse stage. Neither have made gestures as grand as Sweeney and Fulop toward running for governor, but both, as two of their respective parties’ top legislators, are potential candidates.

And yet it was Bramnick, a power wielding Republican who’s tight with Gov. Chris Christie, who landed his own platform during the ceremony. Though he hails from the state’s 21st legislative district, encompassing parts of Union County, Bramnick was one of the few Republican presences in the room today, and his appearance could easily be construed as another small move to better assert himself in a largely Democratic part of the state. 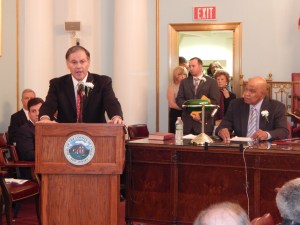 “I come here today to congratulate the winners of the election, because that’s what we do in America,” Bramnick said during a set of brief yet patriotic remarks at the podium. “We recognize who won, and then we support leadership, and we work together. Those who want to divide us, they have no place in Union County. We’re here to work together, show respect for each other, and show civility. That’s what America is about.”

Wisniewski, either because of the heat or because he was seated next to Bramnick — who, as one of Christie’s closest allies in the legislature, stands very nearly at political odds with the Democrat, the chairman of the Select Committee on Investigation into the Bridgegate scandal and thus the governor’s mortal enemy — left the room just 30 minutes into the proceedings. 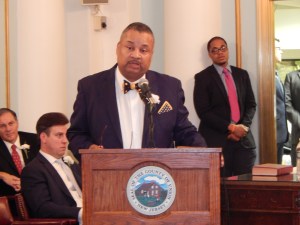 Wisniewski was there, as was Middlesex County Democratic Chairman Kevin McCabe, an indication also — or mainly — of the growing alliance between Middlesex and Union, two historically underrepresented counties squashed between the north and the south. 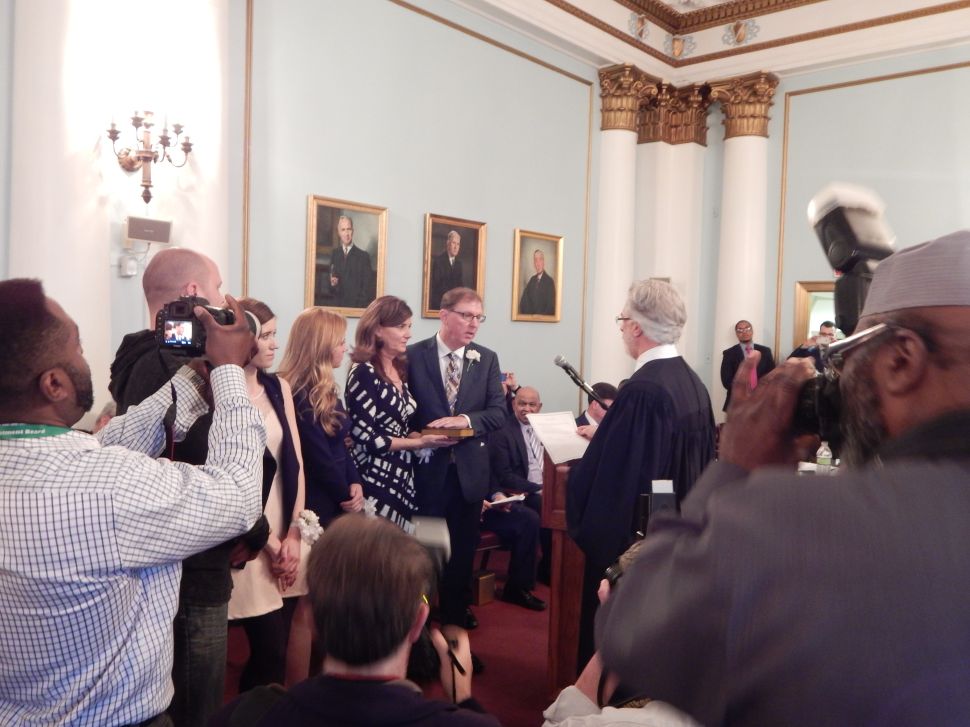