“Don’t ask the taxpayers of New York to throw good money after bad, we’ve done that for decades. Let’s make the hard choices once. Let’s stand up for the kids once,” Mr. Cuomo said in his State of the State address in Albany. “And if we make these reforms, I am prepared to make a very large investment in education.”

Mr. Cuomo promised to boost an education budget increase from a planned $377 million to $1.1 billion—saying he’d invest the extra money only after the reforms “because it will be the right education system.”

But many of his proposals—such as toughening up evaluation systems teachers barely agreed to in the first place, firing teachers with bad ratings, tying tenure to evaluations, and increasing the cap on charter schools—are sure to be met with ire from politically powerful state and city teachers union. Mr. Cuomo seemed to recognize this in his speech, saying education was the area where “reform is going to be the most difficult.”

The agenda may also pit Mr. Cuomo against local politicians who have often sided with teachers unions—such as Mayor Bill de Blasio, who has been resistant to increasing the number of charter schools in the city, something Mr. Cuomo specifically suggested in his speech.

“The bad news is they are baloney,” Mr. Cuomo said.

While only 38 percent of high school seniors are college-ready, 98 percent of teachers are effective, he said. “The problem is clear and the solution is clear: we need real, accurate fair teacher evaluations.”

He proposed eliminating local exams from evaluations—to avoid over-testing or inflation—and relying on state exams for 50 percent of a teacher’s evaluation. The other 50 percent would be “limited to independent classroom observations.” No teacher could be rated effective or highly effective unless they were effective in each category.

The governor would also tie teacher tenure to the evaluations, granting it only after five years of effective ratings.

“I believe the teacher evaluation system should be used to incentivize and reward high performing teachers and if a teacher is doing well, incentivize that teacher who is dong well and pay them accordingly,” Mr. Cuomo said, with a $20,000 bonus for highly effective teachers.

Teachers on the other end of the spectrum, Mr. Cuomo said, would be offered help. If it doesn’t work, a “chronically ineffective teacher” must be removed from the classroom—a process that is now so difficult most districts don’t try, Mr. Cuomo said.

He called for a “faster and fairer” process that would remove a teacher after two ineffective ratings.

Mr. Cuomo insisted money alone would not fix the problem, pointing to the state’s outsized spending in Buffalo’s failing school district. He said the state has “condemned” 250,000 children—often poor and of color—to failing schools, and proposed a model for turning those schools around by handing them over to nonprofits or turnaround experts to create “community schools.”

Students in failing schools should also have preference in charter school lotteries, Mr. Cuomo said, and more charters should be opened.

“We want to the add another 100 to the cap and allow the cap to be statewide, to eliminate any artificial limits on where charter schools will open,” Mr. Cuomo said, a clear reference to the limits set in New York City.

Unsurprisingly, the plans for reform did not find favor with the state’s teachers union, New York State United Teachers, nor with Mr. Cuomo’s liberal primary challenger Zephyr Teachout, who both insisted the true crisis was inadequate and unfair state education funding.

“The truth is, there’s no epidemic of failing schools or bad teachers. There is an epidemic of poverty and under-funding that Albany has failed to adequately address for decades. Nearly 1 million New York schoolchildren—including more than one-third of African-American and Latino students—live in poverty. The state’s systemic failure to provide enough resources for all of its students and to do so equitably—while giving all teachers the tools and support they need—is the real crisis and the one our governor is trying to sweep under the rug,” NYSUT President Karen Magee said.

Ms. Teachout blamed Mr. Cuomo for the “most segregated schools in the nation” and accused him of seeking to privatize education and take resources away from public classrooms.

“In other words, he is holding children hostage to the demands of his Wall Street donors and his personal political motivations, while kids go to school in overcrowded classrooms without arts, sports, or counselors. He is right that we have one system for the rich and one for the poor, but the reasons is clear: the disparate funding that is his legacy,” she said. 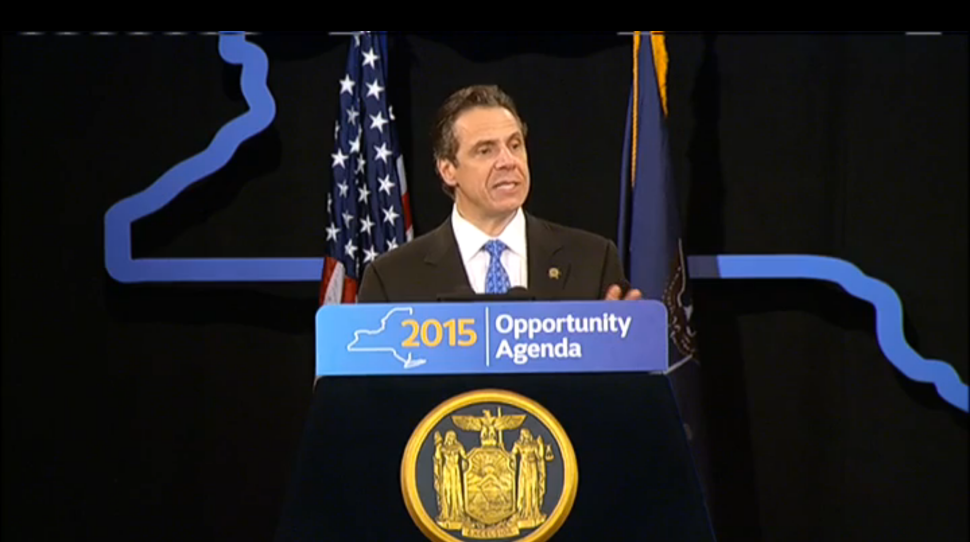