Mr. Donovan, a candidate for Congress to replace Mr. Grimm, said the indicted fellow Republican had a “very successful” career in Washington, despite pleading guilty to a felony tax evasion charge that forced him to resign this month.

“I think he was very successful,” Mr. Donovan told Errol Louis on NY1 last night. “We were one of the communities that were struck hard by Superstorm Sandy and Michael was very aggressive in trying to help our community, that and the part of the community in Brooklyn, that was affected.”

Mr. Donovan said Mr. Grimm was “wonderful” when “they tried to raise the insurance rates, the flood insurance rates, and it was his bill that was passed that saved people money. So I think if you ask Staten Islanders what they feel about Michael’s tenure as a congressman they’d say he was very successful in representing the community well.”

Mr. Grimm faced a 20-count indictment last April related to his management of a Manhattan restaurant before he was elected to Congress. Seeking re-election, Mr. Grimm professed his innocence and easily defeated a Democratic challenger in November. Shortly after his victory, Mr. Grimm pleaded guilty and said he would resign, drawing sharp condemnation from critics who said he lied to voters throughout his entire campaign.

Though Mr. Donovan claimed last night there was no “blemish” on Mr. Grimm’s congressional record, the Republican’s four years in Washington were very controversial. Mr. Grimm threatened to throw a television reporter off a balcony, allegedly had sex in the bathroom of a Brooklyn bar and faced a federal investigation into his fund-raising. His race last year against a bumbling Democrat, Domenic Recchia Jr., became a national laughingstock.

Republicans in Washington immediately distanced themselves from Mr. Grimm when he was indicted. He had few allies on Capitol Hill during his years in Congress.

Mr. Donovan, nominated by the Staten Island Republican Party on Saturday to run in a special election, seemed to contradict his defense of Mr. Grimm when he sought to explain the rationale for his own candidacy.

“Certainly helping those victims of Superstorm Sandy. It’s been two years now. A lot of people have been displaced, a lot of people are out of their homes,” Mr. Donovan said in response to a question about what his top priority in Congress would be. “Right now we’re nine days without representation and it’s unfair to the people of Staten Island and Brooklyn in the 11th Congressional District. I’m hoping that we have an election soon … right now there’s no voice.”

Mr. Donovan, who rose to prominence for failing to secure an indictment in the Eric Garner case, is a strong favorite to win the more conservative Staten Island and Brooklyn-based seat. Gov. Andrew Cuomo has not yet set a date for the special election and the Democrats have not chosen a candidate to oppose to Mr. Donovan. 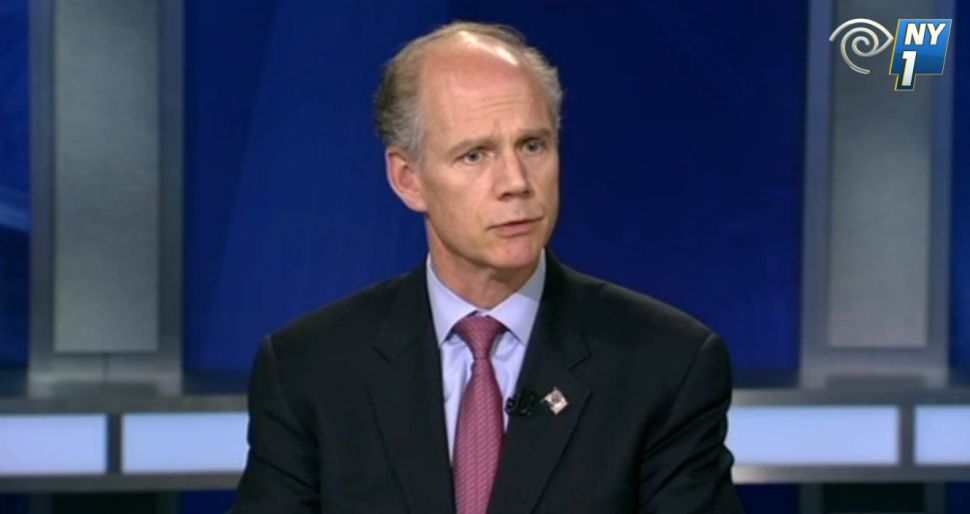