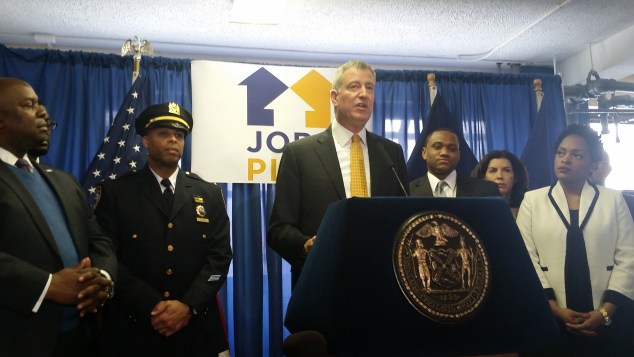 Mayor Bill de Blasio announced today an effort to bolster his predecessor’s far-reaching initiative to help young minority men improve their lives, insisting that he was doing so at the behest of President Barack Obama.

Mr. Obama, the nation’s first black president, launched “My Brother’s Keeper,” a 2014 plan to bring foundations and companies together to test a range of strategies to support young men of color, taking steps to keep them in school and out of the criminal justice system.

“He put down a challenge,” Mr. de Blasio said of Mr. Obama. “New York City has made the decision to take up the president’s challenge, to double-down on our existing efforts, to go a lot farther.”

Speaking at a press conference in one of the city’s poorest and heavily African-American neighborhoods, Brownsville, Brooklyn, Mr. de Blasio praised former Mayor Michael Bloomberg, a political adversary, for creating the Young Men’s Initiative in 2011, a $130 million public-private partnership aimed at helping underprivileged black and Latino men land jobs and avoid prison. Mr. Bloomberg, a billionaire, personally financed about a quarter of the cost; George Soros, a de Blasio ally and chair of the Open Society Foundations, also pitched in $30 million.

Mr. de Blasio said today the city would be maintaining its financial commitment to the program and would be using money from Mr. Bloomberg’s philanthropic organization, though he was more dismissive a year ago about taking cash from his predecessor. Today, Mr. de Blasio said the initiative would be launching four new programs that his administration hopes will increase literacy in young children, improve graduation rates and workforce readiness, and protect youth from violent crime.

The mayor, a liberal Democrat, also announced the appointment of a new executive director of the Young Men’s Initiative, Cyrus Garrett. Mr. Garrett will report to Deputy Mayor Richard Buery, who grew up near Brownsville in East New York.

“Too many of our young men of color are in fact not given the opportunity to achieve equal opportunity, to have their part of the American dream,” Mr. Buery said. “I was coming from a neighborhood where young people were simply not put on the path to success.”

To ensure all children read at grade level by second grade, Mr. de Blasio said the city will provide more tutoring through reading programs for 10,000 children from kindergarten through second grade. The city will set a goal of connecting 5,000 minority men with mentors through nonprofits by 2017, develop programs to recruit 1,000 minority men to become city school teachers over the next three years and establish a “central role” for the Young Men’s Initiative in improving the strained relationship between the NYPD and minorities.

Mr. Garrett said this last goal would include “meaningful opportunities” for cops and young minority men to interact, though he was not specific about how the city would go about doing this.

“When Mayor Bloomberg created the Young Men’s Initiative, it was a first of its kind program that established the blueprint for how local governments can improve outcomes for Black and Latino young men,” Ms. Gibbs said. “It has now taken hold in 100 cities across the country, as a part of President Obama’s My Brother’s Keeper Community Challenge.”

“Mayor de Blasio’s decision to build on those results will help keep New York City the national leader on the issue,” she added. 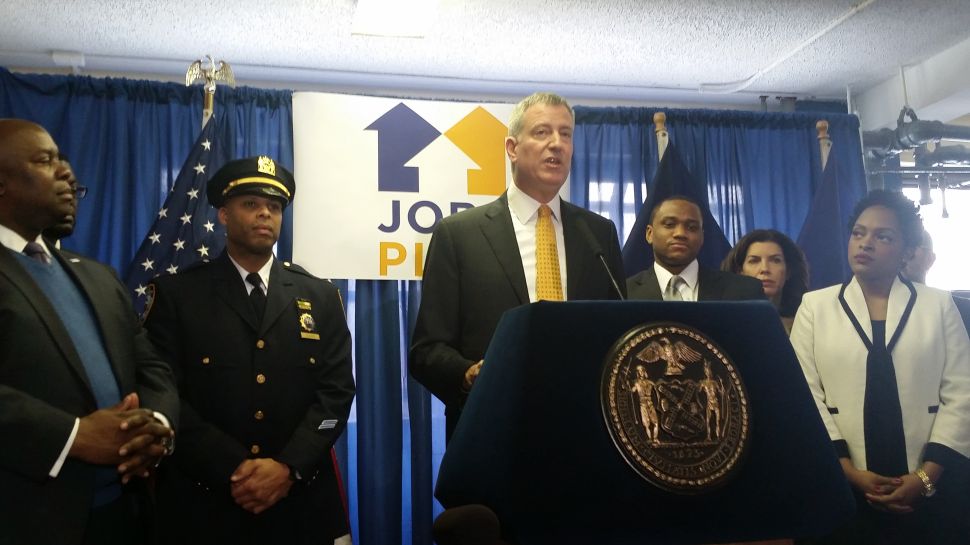