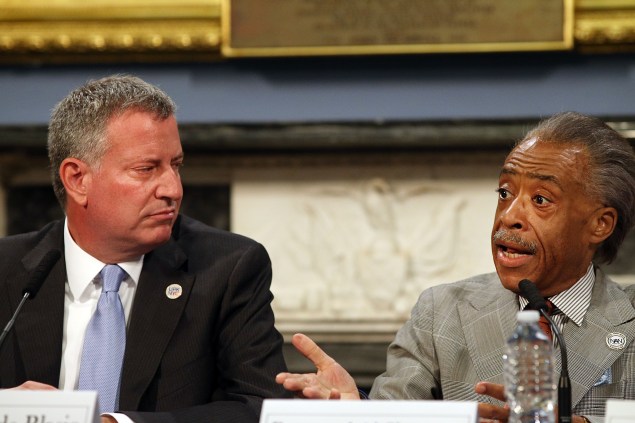 Defying critics in the police department and media, Mayor Bill de Blasio returned to Rev. Al Sharpton’s National Action Network headquarters today for a Martin Luther King Jr. Day rally, offering yet another defense of his ongoing attempt to reform how the NYPD interacts with minorities.

“What does every one of us want? The respect of those who serve us. But we owe them respect too,” Mr. de Blasio, speaking to much applause, said on the NAN stage in Harlem.

The mayor—assailed for being too tolerant of the anti-police brutality protests in the wake of a Staten Island grand jury’s decision not to indict a white police officer in the death of Eric Garner, a black man—again criticized elements of the protest movement which have taken direct aim at police.

“If you’re saying something vicious and vile to a police officer, you are not making change, you are not moving us forward—you are holding us back,” Mr. de Blasio argued.

Mr. Sharpton chided the press for scrutinizing his close relationship with the mayor, especially as a glaring rift between police unions and City Hall has grown. Reviled by police leaders and conservative critics, Mr. Sharpton’s reputation has been suffering of late—according to one recent poll, only 29 percent of New Yorkers view him favorably.

“Unlike the popular view, Bill de Blasio and I don’t agree on everything,” Mr. Sharpton said. “We didn’t want a flunky—we wanted a mayor and we got a mayor that would talk to us and respect us and we are grown enough to deal with a person who can disagree with us but respect us at the same time.”

As Mr. Sharpton spoke, Mr. de Blasio sat behind him, smiling serenely. The mayor drew sharp criticism from police for employing a top Sharpton aide, Rachel Noerdlinger, as his wife’s chief of staff, and holding a roundtable on police and community relations at City Hall which appeared to place Mr. Sharpton on equal footing with Police Commissioner Bill Bratton.

After the Garner decision and the murder of two police officers in December, police officers literally turned their backs on Mr. de Blasio three separate times. Patrick Lynch, the president of the Patrolmen’s Benevolent Association, said Mr. de Blasio had blood on his hands after the officers, Wenjian Liu and Rafael Ramos, were killed by a mentally unstable man who had vowed to target police.

Mr. Sharpton, in defending Mr. de Blasio, compared him to another prominent ally of his: President Barack Obama.

“I watched as Barack Obama handled with grace some of the most unfair criticism, some of the most vicious, venomous attacks and he never responded,” Mr. Sharpton said. “I see that same kind of grace and dignity in how this mayor has handled the most venomous, unfair stuff in the last few weeks.”

“Bloomberg and I never stopped talking. This kind of name calling and ugliness is something we should never continue in this city,” Mr. Sharpton said. 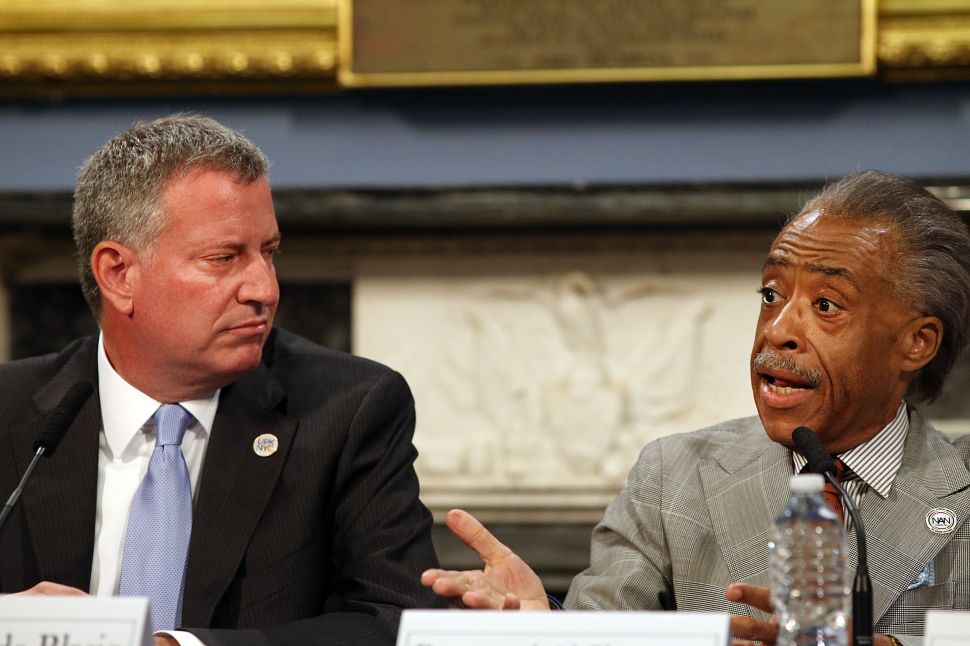