One of New Jersey’s most socially conservative congressmen is taking serious flak today from state Lesbian Gay Bisexual Transgender groups for comments he made about gay rights — namely, for saying he does “not construe homosexual rights as human rights.”

The Lesbian Gay Bisexual Transgender Caucus of the New Jersey Democratic State Committee blasted Republican U.S. Rep. Chris Smith (R-4) for the comments, calling them “close-minded and “appalling” and demanding he apologize. In a statement today, the group said Smith’s position is particularly offensive given that he serves as Chairman of the House Foreign Affairs’ Subcommittee on Africa, Global Health, Global Human Rights, and International Organizations —a “position from which human rights should be defended, not attacked.”

Smith made the comments during Wednesday’s House Foreign Affairs subcommittee on Africa hearing, a day when 12 men were reportedly arrested for attending an alleged LGBT wedding in Nigeria.

“It’s simple: LGBT rights are human rights. It’s shocking that Smith — or anyone in his position — would make such close-minded comments to the contrary,” said Chris Hillmann, LGBT Caucus Co-Chair. “For a person in his position to dehumanize such a large segment of our society and to suggest that members of the LGBT community are creating hurdles for U.S. diplomats is appalling on so many levels. Representative Smith should apologize for trying to pit some people’s human rights against those of of others.”

The group also condemned the congressman, who has a reputation of being one of the most conservative members of New Jersey’s congressional delegation, for insinuating that opposition to anti-LGBT legislation negatively impacts the U.S.’s ongoing relationship with the country.

The U.S. engagement in the embattled region stems back to last year, when U.S. State Department has sent 80 military personnel to a surveillance outpost in Chad and a government delegation to Abuja to consult with the Nigerian government after the rogue terrorist group Boko Haram captured 200 schoolgirls in April.

Smith has called for an end to that violence, penning an op-ed in the Star Ledger in June urging officials to move to stop Boko Haram.

“Once again our Congressman has disrespected his constituents and put people in danger half way across the globe. With all the tragedies occurring in Africa surrounding the LGBT community one would think that a Congressman would understand his words can be destructive. We must speak as one voice to protect all lives from atrocities no matter where they happen. All lives matter,” said Ed Zipprich, an openly-gay City Councilman in Red Bank, New Jersey.

The national Human Rights Campaign responded to Smith’s take on the issue by smacking him with a “0” on it’s Congressional Scorecard, which tracks how representatives in Washington vote on human rights-related issues.

Last week, Smith played an instrumental role on Capitol Hill in getting passed legislation to cut off federal funding for abortion and health insurance plans that fund the procedure. 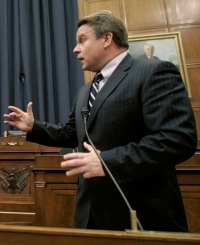