God’s in his heaven, the King’s on the wireless, and the thirst is real for Lady Mary Crawley. Yes, in one of Downton Abbey’s most delightful developments ever, Mary has embarked on a secret sex safari with dashing Lord Tony Gillingham, determined to determine their sexual compatibility before tying the knot. So much of the business of tonight’s episode was about preparing for this clandestine fuckfest — ordering Anna to purchase birth control, rebuffing past suitor Mr. Blake, figuring out which clothes to pack based on whether they can be removed by a revved-up gentleman instead of an expert lady’s made — that it might as well have been called Down-Low Abbey instead.

Which is great! I mean, who’d have thought that Julian Fellowes, Tory member of the House of Lords, would craft arguably TV’s most compellingly, uniquely sexual character, and a woman to boot? Downton never uses Lady Mary’s sexuality to make her a figure of ridicule or of menace, never presents her desire as foolhardy or grotesque, never surplus or insufficient to the needs of some male counterpart. She remains herself — charming, cutting, a bit aloof, serious enough about her own happiness not to make it subservient to anyone else’s — whether in the bedroom or out of it. This can be awfully, awfully sexy, as self-confidence often is: When Anna suggested choosing only certain dresses for the trip “so you can take them on and off without my help” and Mary responded “Well, I’ll have his help,” I all but collapsed onto my fainting couch. But it can make for some terrific, character-revealing comedy too, as when she tells Mr. Blake she’s only recently emerged from the “mist” that surrounded her following Matthew’s death: “And the mist is clearing around the lithe and supple figure of Tony Gillingham,” he deadpans. “Maybe,” she shrugs, completely indifferent to how this level of indifference looks. She likes Tony, she’s planning a getaway specifically to have sex with Tony, but let’s not get ahead of ourselves here. Few women on TV (outside of the surprisingly sophisticated Broad City, of all things) are afforded that kind of emotional freedom.

Downton has a knack for seeking out the unexplored corners of human relationships — the odd little eddies and ripples and subcurrents that don’t mark a dramatic divergence from the main flow of two lives lived together, yet matter just as much in the moment. Take Carson and Hughes’s disagreement regarding the proper place for the war memorial. Like Lord Robert, Mrs. Hughes believes it should stand in the center of town, a reminder of the dead woven into the everyday life of their survivors. Carson feels such a setting would soon obscure the memorial’s purpose — it would become a place to tie one’s shoes or sit and gossip rather than contemplate the sacrifice of our brave boys — and argues for the pastoral setting of the village cricket pitch instead. With hindsight, we can see that both sides are pretty much correct. Like any public space, memorials make the most sense in spaces where the public already is instead of shunted off to some easily ignored side-space, but at the same time, yeah, that pretty much guarantees people will stop there for a smoke and a sip of their Starbucks.

So in the end, it’s a minor disagreement. But — and here’s where it gets interesting — it sticks in Carson’s craw, not because he thinks Mrs. Hughes is so horribly wrong, but simply because disagreeing with someone you respect and care about is unpleasant no matter how minor the source of the disagreement. “I don’t like it when we’re not on the same side,” he confides to her. “We’re different people, Mr. Carson,” she responds reassuringly. “We can’t always agree.” “I know…but I don’t like it,” he concludes with an air of faint melancholy. While my dreams of a torrid Carson-Hughes love affair are likely to go unfulfilled, the pair are clearly soul mates of a sort. If you’ve had such a relationship, whether romantic or platonic, you know that those little differences can make you feel a world apart, precisely because you think the world of the other person. That desire to be completely in sync is powerful, and powerfully disconcerting when disrupted. What a pleasure to see this strange sensation spelled out on television.

The Carson/Hughes schism is echoed in Robert and Cora, though Robert doesn’t realize it yet. When handsome, worldly Mr. Bricker spends his trip to Downton eyeing the lady of the house rather than its paintings, Robert, caught up in fussing over every new thing under the sun, believes the guy’s unbecomingly interested not in his wife but his dog. “Very well,” Cora sighs when Robert instructs her to tell Bricker to “stop flirting with Isis.” “I’ll tell him. To stop flirting.” I’m guessing she won’t. And frankly, good for her. Robert pays much more attention to the cricket pitch than to the missus; seeking that attention elsewhere may be ignoble, but it’s understandable too, and could redound to Robert’s benefit. It’s good to feel desired.

That’s the missing ingredient in Thomas’s life, of course, and the driving force of the episode’s final major storyline. Now that Jimmy has been expelled from the Abbey following his indiscretion with an aristocratic visitor, Thomas has no one left who looks at him with anything but contempt. He’s monstrously cruel to Baxter and Molesley, and an unending nuisance to Bates and Anna, but his friendship with Jimmy was true, and as we learn during the handsome young footman’s heartfelt goodbye, reciprocated. Thomas has brought the dislike of the other staff members upon himself, no question. But throughout the series, there have been times when he’s shown a different side of himself, and been rewarded for it with sincere appreciation and admiration from the other members of the household, both upstairs and down. It’s possible to set up a virtuous cycle instead of a vicious one, a path in which knowing people like you makes you want to do more likeable things. “There are times when I’d like to belong,” he tells Anna, despite himself. “Does that sound funny?” “Not to me,” she replies. “Not at all.” Mary and Tony, Carson and Hughes, Cora and Bricker, Thomas and anyone who’ll have him — we all need somebody to lean on. 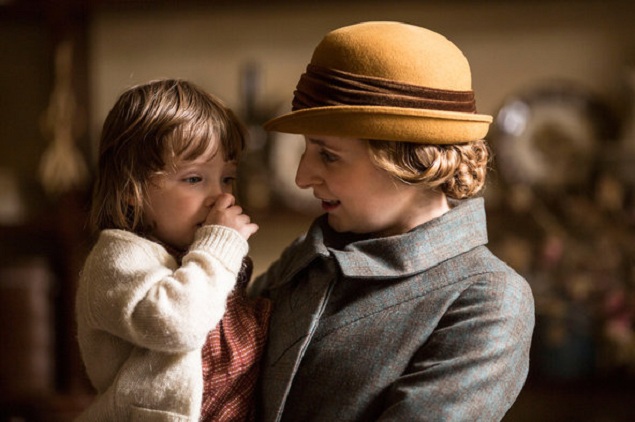