[Warning: The following statement is NSFWR (Not Safe For White Russians); please escort any and all refugees from the Revolution out of the drawing room before continuing.]

If I had to describe Lady Mary Crawley’s sex life in a sentence, I’d turn to Karl Marx. History repeats itself, he warned us, first as tragedy, then as farce. How better to describe Mary’s dangerous liaisons? The first, with the dashing Turkish attaché Kemal Pamuk back in the pilot episode, ended in death and disgrace. The second, with eager-beaver suitor Lord Tony Gillingham in tonight’s episode, turns out to be a source of dirty jokes and awkward pauses, but little else.

That’s undoubtedly disappointing for Mary, and for any of us hoping for some genuine heat emanating from her sexy skullduggery with Tony. But the comedy was cute, and that counts for something. Tony’s groan-worthy response to Lady Mary’s room-service order — “Well, you’ve worked up a big appetite” — is exactly the kind of try-hard, corny crack you might make when you’re just starting to test the boundaries of newfound intimacy. Gillingham recovers well enough, it must be said, responding to Mary’s weary “I can’t bear vulgar jokes” by telling her “I’ll make note of that. I’ve made note of everything.” But given the grimace with which Mary greets him several days later when he pays an unexpected visit to her at Downton, it seems unlikely he’ll get the chance to put his research to any use.

If nothing comes of the tryst (aside, I suppose, from Tony and Mary a few times), it’s the Dowager Countess who stands to be most disappointed. Lady Violet reacts to the bad news of Mary’s bad behavior with the instinctive grace of an experienced gossip, instantly concocting a cover story for her granddaughter, then using it to pound the prurient prudery of her snitching butler Spratt right up his clenched posterior: “What did you imagine you were witnessing? Nothing vulgar, I hope.” She’s just as funny when she confronts Mary about the affair, asking “Can we be confident that there will be no…unwanted epilogue?”, then informing her “In my day, a lady was incapable of feeling physical attraction until she’d been instructed to do so by her Mama.” The punchline, of course, is that the Dowager was DTF once upon a time, as revealed when one of the aristocratic Russian refugees Cousin Rose is entertaining reveals himself to have been the secret highlight of Lady Violet’s visit to Russia long ago. As the Dowager, Maggie Smith has launched a thousand Tumblr gif sets, so it can be easy to overlook how effective an actor she is beneath the one-liners; look no further than how she reacts to seeing the fan her lover gave her for the first time in decades — so overwhelmed by happy memories she can only smile and stutter — to see how good she is at breaking the mold she herself created when need be.

But there is one character who hits a serious note in responding to Mary’s discreet indiscretion, and it’s a surprising one given their mutual support for all these years: her lady’s maid, Anna Bates. Anna’s discomfort with Lady Mary’s low-key libertinism is a welcome development, simply because it clouds the usual crystal-clear hindsight with which contemporary fiction regards outdated morals. It’s a marvelous thing that there is now little social stigma attached to women having sex out of wedlock (though there’s still more than there ought to be), so it’s not as if Anna is to be applauded for her disapproval. It’s just that she shows it wasn’t only repressed joykills, comical fuddy-duddies, and intolerant assholes who disapproved. Even on a relatively small-c conservative show like Downton, the temptation is to put the shibboleths of the past in the mouths of jerks or jokes, as if there were no such thing as likeable people with unlikeable ideas. Anna’s a wonderful, caring, vivacious, loyal person who nevertheless believes extramarital sex to be so grave a sin she worries she’ll be tainted by osmosis. Lots of people were like that then; swap out the specific issue and lots of people are like that now. Downton deserves credit for reflecting this everyday complexity.

That’s the thing about this show: It’s often sharp where you least expect it. For example, the mysterious criminal backstory of Baxter, the lady’s maid Thomas tried in vain to force into servitude as his spy, is obviously a rehash of Bates’s first-season storyline in almost every particular. Yet Baxter’s description of the relationship that drove her to thievery — she fell in love with a handsome creep who turned her into a creep as well, and she liked it — is a compelling (and weirdly hot) depiction of how pleasurable it can be to shape oneself according to the desires of another, even if those desires are bad. On the flip side, the endless stream of reflexive self-effacement that comes out of Cora’s mouth as she’s wooed by Mr. Bricker, the art expert, showed the unconscious toll that the soft sexism of low expectations can take. Bricker’s not just blowing smoke when he tells Cora she has genuine insight when it comes to art; when do you suppose was the last time anyone complimented her for her skill or intelligence? How long will it be before the next time? Lord Robert is a far cry from Baxter’s bastard of an ex, but in some ways he’s as inadequate to Cora’s needs as Mary discovers Tony Gillingham is to hers. That they have a lifetime together to work on this instead of just a weekend is both a blessing and a curse. 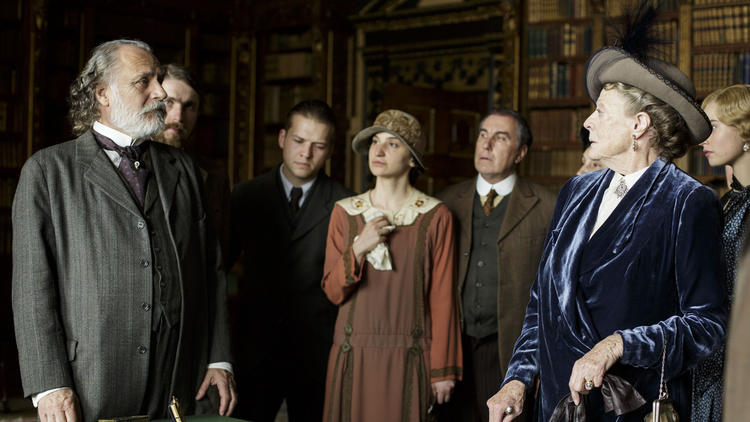