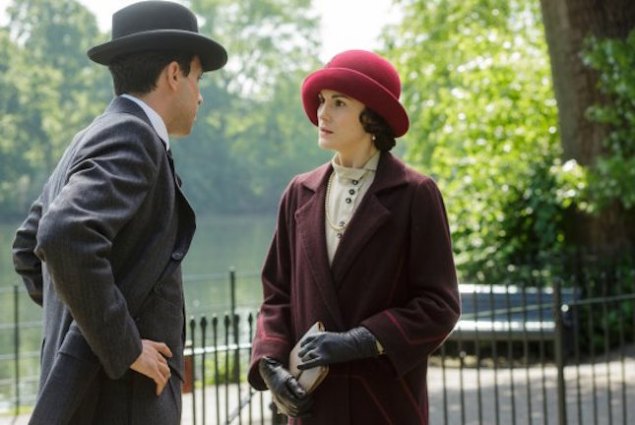 In an episode where Lord Robert gets trolled to the point of apoplexy at the dinner table, Thomas attempts to chemically castrate himself, and Lady Mary groans “ohhhh, yummy” at a fashion show, standing out as the single craziest thing to happen take some doing. So let’s hear it for Lord Tony Gillingham, whose berserk reaction to Mary’s attempt to break up with him — in Seinfeldian fashion, he basically refuses to be dumped — sends him skyrocketing to the top of the Downton Abbey holy-shit list. It’s not the worst thing ever to happen to Lady Mary’s love life, but it may be the most topically relevant, revealing double standards about male and female sexuality that persist to this day.

Tony’s steadfast refusal to take Lady Mary’s “no” for an answer is based on his conviction that no lady of Mary’s station could possibly sleep with a man she hadn’t intended to spend the rest of her life with. Nevermind that the stated purpose of their sexual exploration was to determine whether or not spending the rest of their lives together was a good idea in the first place! No, Lord Gillingham has retconned their liaison into a fait accompli, a preemptive confirmation of love everlasting. If Lady Mary believes otherwise, well, she’d better just think a little harder, huh?

The implied threat, of course, is that if Lady Mary really were speaking the truth of her heart now — if she slept with a guy and subsequently decided to dump him — then she’s no lady at all, and therefore her confidences, and her reputation, are undeserving of Lord Tony’s further protection. “I won’t be tarnished again,” she said last week, only to discover now that the greatest threat along those lines is the guy she said it to. Her predicament is painfully reminiscent of any number of recent real-world incidents: the theft and leak of nude photos from a host of female celebrities, the use of private information to intimidate feminist video game critics by the Gamergate movement, the attempts to expose the identity of the woman at the heart of the UVA rape story. When intimacy and privacy are weaponized, women bear the brunt of the impact.

Kudos must be given here to actor Tom Cullen. He makes Tony’s transformation from appealing (if slightly blunt) suitor to creepy parasite eerily convincing, given how unexpected it was. Cullen’s recent role in the British sci-fi/horror anthology series Black Mirror saw him walking the razor’s edge between charming and sleazy; it seemed like an outlier at the time given his work on Downton, but it sure makes sense now.

Lady Mary, of course, isn’t the only character made to suffer for their sexuality. Thomas Barrow works best as a character when that character is at his worst — think of his failure as a black marketeer during the war, or his panic following his accidental outing when he put the moves on Jimmy, or even his doomed attempt to blackmail his aristocratic lover way back in the pilot. It’s in these moments that actor Rob James-Collier can tone down Thomas’s smirk and sneer (among the best on TV) and let something more human and more tragic come through. Eyes watering, voice wavering, composure crumbling, he becomes a portrait of perfect misery, a man forced by circumstance to be something he’s not and poisoned by every second he’s forced to live the lie. The near-simultaneous loss of his one real friend, Jimmy, and his latest would-be partner in crime, Baxter, is a perfectly persuasive reason for him to finally say “fuck it” and turn to mad science to warp his inner life to fit his outer one. Elsewhere in the episode, Tom Branson says that despite his innate antipathy for the aristocrats who fled the Russian Revolution, he still feels bad for anyone forced to make a brand new life for themselves after fleeing the ruins of the old; the plight of Thomas Barrow, a manipulative schemer who’s still just a human being desperate to find happiness, could be described in identical terms.

Tom Branson’s ersatz love interest, the left-wing teacher Miss Bunting, is almost the opposite of Thomas. She seems like a good person, an educator through and through, determined to help others better themselves without condescending to them. But good God, is she ever an asshole! At dinner with the Crawleys, she sinks her teeth into Lord Robert’s (admittedly very lame) insistence that her lessons for Daisy are more harmful than helpful until she’s left gnawing on pieces of bone. No matter how right Daisy and her boss Mrs. Patmore prove her, no matter how much Lord Robert admits and apologizes for his poor judgment, no matter how many family members chime in with everything from gentle diversions to “jeez give it a rest why don’t you”s, she can’t let it go, rubbing Robert’s face in her open contempt for him until he blows up, storms out, and banishes her from Downton along the way.

And really, can you blame him? Obviously Miss Bunting’s on the right side of history here, so it’s not a matter of siding with Lord Robert’s rules of order over hers. Rather, it’s a matter of being gracious to one’s enemies in their defeat — especially when they’ve invited you to dinner and you’re there as the date of their son-in-law. Argue with his lordship all you want, you certainly won’t be the first to do so at that table, but focus on the issue rather than the ad hominem insults. For one thing, you’re on firmer ground that way, since Lord Robert is usually shown to come around to the innately decent position eventually. But more importantly, you’re just, you know, not being a huge dick. Miss Bunting gets any number of social and conversational clues that her point is winning the day, but she still starts each new sentence like she’s waging a war of words against a completely undefeated and unapologetic opponent. Compare and contrast with Lord Merton, whose surprisingly romantic proposal to Isobel Crawley demonstrates a truly ingratiating talent for figuring out exactly what to say to put another person at ease even during a delicate discussion with an uncertain resolution.

In a weird way, fact that any of the other characters are willing to defend and hang out with Miss Bunting afterwards speaks to a surprising progressivism within Downton’s DNA. A lesser show would have used her personal unpleasantness to invalidate her political ideas as well. This show features several characters willing to say “Man, that was rude…but she kind of has a point.” You can be a deeply moral person who’s kind of a jerk, just as you can be an insufferable schmuck whose personal plight is absolutely heartbreaking, just as you can be a pleasant boyfriend who transforms into a ghastly one the moment you try to break up with him. Just like in the Downton logo that shows up at the end of the opening credits each weak, the stand-up side and its upside-down reflection can and do coexist. 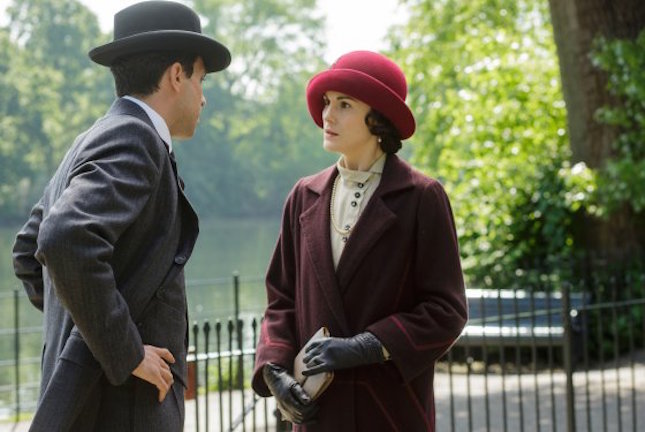