Like the fog that floated around Lady Edith as she biked toward her baby in the opening scene, Downton Abbey fever enveloped me within seconds. This is, perhaps, a perverse reaction. PBS’s blockbuster ratings notwithstanding, haven’t we agreed, we TV-watching sophisticates, that Downton is past whatever prime it can lay claim to having — not true New Golden Age drama, but just General Hospital with tonier accents and fewer James Franco cameos (so far)?

To quote Lord Robert, “Forgive me, but you’re talking nonsense.” No, Downton Abbey is not a searing social satire of England’s landed aristocracy; this episode’s great dinner-table debate about commemorating the Great War, just in time for the 100th anniversary still underway when Season Five began airing in the UK last year, is as close as it gets to all that. But beneath the sumptuous cinematography, score, costumes, and posh accents lurks one of the smartest shows on TV in terms of careful observation of how humans act and react toward the other humans they’re closest to.

This is true even of the show’s villain, which is usually where even the best dramas break down. Thomas Barrow reflects an essential truth about human nature, one virtually unreported on TV today: People who are right bastards to one person can be dear, true friends to another, and never the twain shall meet. Normally, morally “complex” characters are played like, I dunno, the asshole sister Princess Amber from the Disney Junior cartoon Sofia the First: kind of a jerk most of the time, but capable of growth and learning, and eventually able to squeeze out an apology and repayment to people they’ve wronged. While this beats the white hat/black hat model of old-school Hollywood fairy tales, it still relies on an emotional and ethical flattening in which people’s behavior is more or less constant no matter who they interact with.

Thomas Barrow is different. Here’s a guy who’s clearly capable of actual, sincere friendship. He got along with his ex-BFF O’Brien for years, and that kind of closeness requires more than just mutual scheming. Now, he’s a valued buddy and advisor to James, whose trust and friendship he won despite the friendship’s origin in Thomas’s unrequited romantic interest in the guy — an interest, moreover, that Thomas appears to have truly put aside, instead being happy just to be close to a dude he likes and respects.

Yet even as he coaches Jimmy through his tryst with the good Lady Anstruther (played by Anna Chancellor, unforgettably and unfairly dubbed “Duckface” in Four Weddings and a Funeral), Thomas is an unbearable bully to Baxter, the ladies’ maid whose employment at Downton he engineered in order to have a spy he could blackmail into compliance. He’s got neither patience nor pity for her, not even when she blows up his scheme by revealing her criminal record to Lady Cora before he can narc on her. The Thomas we see with Baxter and the Thomas we see with James are like two different men.

I don’t know about you, but that maps to my life way better than I feel comfortable admitting. I’d love to be a well-rounded person at all times, evaluating everyone with whom I come into contact on a fair and impartial basis, gradually overcoming my biases and jealousies and petty rivalries; I’d also love to have a healing factor and adamantium claws like Wolverine, and neither scenario is particularly likely. No, it’s far more frequently the case that I’m kind, caring, and careful around people I like, and a nasty little shitbird to people I loathe. You can blast Downton for its soap-opera plots and aristocratic airs all you like, but when was the last time you saw a show reflect this basic reality of human nature?

This dynamic is played out in less dramatic form with Molesley, Baxter’s freshly, falsely black-haired white knight. Molesley’s a comic-relief character, a hapless doofus who nearly floundered his way out of service, came up short in every personal and professional rivalry in which he’s engaged, and straight-up dodged the draft during the Great War by faking a medical condition. In this very episode he’s roundly mocked and pretty muchd emoted for his DIY Just for Men hair-care regimen. Yet at the same time, his advice for Baxter — to come clean to Cora about whatever secret Thomas is holding over her head — is sound, his care for her sincere, and his total lack of interest in finding out the secret himself noble. He’s allowed nuanced, contradictory character traits that belie claims regarding Downton’s moral simplemindedness.

No character better demonstrates this genuine complexity, as opposed to the usual shades-of-gray simulacrum thereof, than Lady Mary. “Matthew changed me,” she told her current suitor Lord Tony Gillingham last year, after the untimely death of her husband — and she meant it as a lament. And yes, Mary is different than she was when we first met her: less of a snob, warmer to her family, more hands-on with the running of the Abbey and the village with which it exists in symbiosis. But with Matthew gone, the amazing thing about this character is how the show allows her to remain who she is — smart, cutting, sexy, and deliberately distant. “Tony, I do love you, you know, in my cold and unfeeling way,” she tells Lord Gillingham, only half-joking. Mary knows enough about herself to know that if a man is to be happy in a relationship with her, he must see this not as a flaw to be fixed but as a feature of their eventual life together to be embraced. Downton knows it too.

That’s not to say that Mary is a cold fish. On the contrary, ever since she shtupped that Turkish diplomat to death in the pilot, she’s show a delightfully entertaining tendency to prioritize her junk. Her sex life with Matthew was always implied to be, shall we say, robust; now we learn, through her conversation with Anna and the arrangement she agrees to with Tony, that she views sexual compatibility — accurately! — as vital to the long-term health of any couple’s life together. In lesser hands, she’d be an ice-queen archetype, either frigid or predatory. On Downton she’s a thoughtful, careful person who takes pleasure in her sexuality without rushing to toss her heart into the fray. How cool is that?

Before he comes to her room and straight up propositions her, Tony’s pitch to Mary regarding their future is elegantly efficient: “I’d love to make our lives simpler.” And it’s just what Mary wants to hear: as the pair of them join Tom in walking back across the grounds toward the Abbey after their hunting expedition, she smiles and takes Tony’s arm. His appeal is his directness. But it’s a mistake to look at Downton’s appeal in a similar way. The romance, the melodrama, the late-night fires, the scheming and skullduggery — these are the simple pleasures of a soap opera, and if you’re into that kind of thing they’re undeniable. But they’re the candy coating. There’s richer, sweeter stuff underneath. 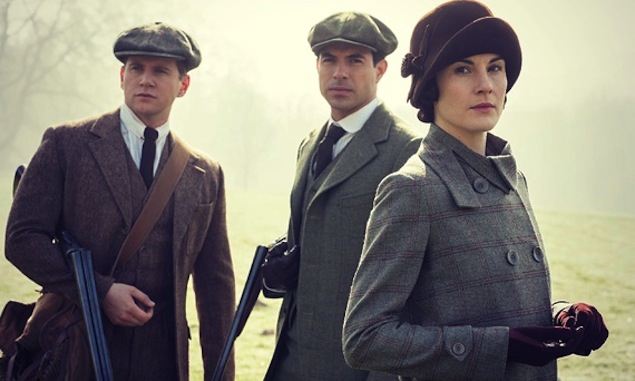