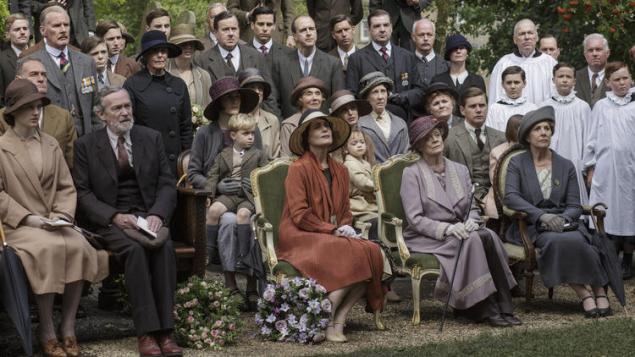 There’s a very quick scene in the opening credits of Downton Abbey that viewers most likely just quickly pass over (and, no, it’s not the shot of Grantham canine Isis’ back end!) Amid, the scenes of the morning ritual ringing bells and breakfast service, there’s a quick glance as a single petal escapes from a flowering plant and lands defiantly on a dressing table. This small sliver of disorder seems like utter chaos in such a buttoned up world.

While this passage has been in the sequence since season one, it seems to more than accurately define season five of the drama, a time when many things are simply going off the rails for everyone even remotely associated with the Abbey.

Rest assured, this is a good thing.

For any show, it’s difficult to keep momentum going without overreaching and ruining the cultivated integrity of the show and its characters, but fans of Downton can rest assured that writer Julian Fellowes once again deftly services every member of what seems like a cast of thousands quite satisfyingly.

The most amazing thing about Downton is that while it’s most definitely a period piece, that distinction seems to be only in the costuming, attitudes and culture while the circumstances and issues explored are so relevant that they could take place in a series set in any era, past or present.

The list of those serious elements contained within the narrative is extensive, covering divorce, PTSD, domestic abuse, career aspirations, single parenthood and even stalking.

All of this is accomplished with the usual flying verbal zingers that viewers have come to know and love from the characters (and not all of the good ones are from The Countess and Isobel Crawley.) Fellowes, the sole writer of the series, an amazing feat in and of itself, also manages to combine swift storytelling with an ample amount of slow burn that creates tremendously creative pacing within each episode and as well as within the overall arc of the season.

In addition to all of this, there seems to be a new twist this go around in that Fellowes has put many of his characters in situations that cause them to swing from likable to unlikeable rather quickly. It’s not overstating it to say that in the course of one scene it’s possible to go from rooting for a character one minute to feeling a particular dislike for him or her the next, and then continue to waver between the two extremes as time passes. Again, this is a good thing. It’s something that’s difficult to accomplish in a rather action-less, dialogue heavy drama, but when done well, as it is here, it’s quite mesmerizing.

At one point, someone flat out admits, ‘You surprise me!’ and this completely holds true for many things happening both upstairs and downstairs.

Being specific without giving too much away it’s still difficult to sum up everything that’s going on in that (often crazy!) house but here goes.

Upstairs, Mary, not the innocent that she used to be, isn’t simply taking her suitors at face value, exploring them (ahem) a bit more before making any lifelong commitments. Edith longs for the daughter she gave up so much that she makes some questionable decisions regarding her involvement in the child’s life. Lord Grantham and Lady Cora experience some marital discord when he continues to work while she takes an interest in a visiting male art patron, while frenemies Violet and Isobel ruminate about love and loss while they each pursue paths that seem surprising to both of them. Former servant Branson, now just Tom since he’s moved up to the ranks of Crawley relative, has decisions to make when it comes to his love life as well when his involvement with a ‘townie’ causes problems for Lord Grantham. Even cousin Rose, far less annoying than in the past, has a lot going on when her charity work evolves into something more.

Downstairs, Thomas continues to be conniving, but finds himself in a situation that makes at least one other person sympathetic to him. Mrs. Patmore and Daisy still clash now and then but are mutually respectful of each other, while Carson and Mrs. Hughes try to keep all of the others in check as they exchange fleeting glances. Mr. and Mrs. Bates continue to grapple with her assault and the subsequent death of her attacker while Moseley is well, Moseley, trying his best to fit in with the others.

There are investigations, secrets revealed, and more than one marriage proposal (the parties involved in the proposals will delightfully catch fans off guard), all of which make for yet another fulfilling season of the show.

By the end of series five (as they refer to it in England), that symbolic opening shot may need to be changed from the graceful lilting of that petal onto the dressing table to the entire plant completely smashing to the floor in order to accurately symbolize all that transpires this season within the confines of Downton Abbey. 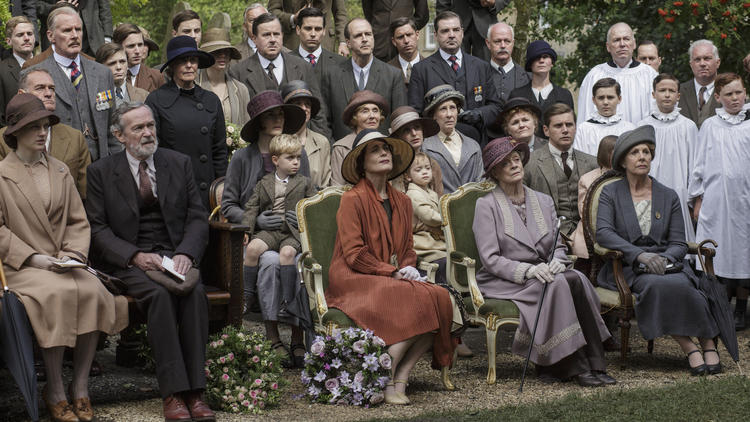