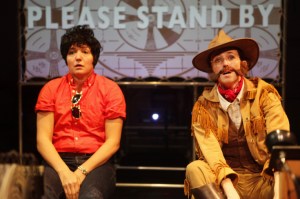 Libby King and Kristen Sieh in the TEAM’s RoosevElvis at the Vineyard Theatre as part of P.S. 122’s COIL Festival. (Photo courtesy of The TEAM.)

It had me at the name: RoosevElvis. Right? But this tale of a lonely factor worker haunted by Elvis and Teddy Roosevelt is also terrific theatre.

Collaboratively created by the TEAM theatre company, RoosevElvis runs through January 10th at the Vineyard Theatre as part of P.S. 122’s COIL Festival. Brought back for the festival, it originally was seen in New York in late 2013, but this highly theatrical tale of vicarious hero worship is in dizzyingly fresh form.

Ann (Libby King), is a depressed and fairly closeted lesbian with drooping, disappointed heavy-lidded eyes. She’s stuck in a working class rut at a meat-processing plant in Rapid City, South Dakota and comes home, pops the cap off a Budweiser, watches Thelma & Louise on the tube for the umpteenth time, and has imaginary conversations with her hero, Elvis Presley.

Things start looking up, however, when Brenda, (Kristen Sieh) a pert, confident taxidermist, answers her singles ad online and they spend a weekend together taking an impromptu road trip to visit Mount Rushmore. They hit it off at first and Brenda can’t believe her luck, but she’s incapable of seeing herself as attractive or a catch and her doleful, beat-down energy is no match for Brenda’s fierce intensity. “Have you read Louis and Clark’s Diaries?” she asked before going off on a motormouth discourse that leaves poor Ann in the dust. It’s as much a class division between them as anything else, but to Ann, it feels like a confirmation of her unworthiness. Still, she’s prompted to show both Brenda and herself that she can reach for the stars and she puts in motion a long-dreamt-of trip to her Mecca, Graceland.

But that’s not where this intricate, wildly entertaining theatre work begins. Cleverly utilizing video to offset and underscore the onstage acting, Ann’s inner life is revealed as the two actresses go for broke inhabiting conflicting aspects of Ann’s internal life as personified by Elvis and Teddy Roosevelt. Not really ghosts, not really familiars, Teddy and “El Vees” as the Rough Rider calls him, hover over Ann’s life trying to one-up each other.

These avatars represent competitive archetypes of masculinity, but also class distinctions. Teddy, as riotously embodied by Ms. Sieh, is a firecracker, dancing a jig, punching projected images of buffalo like he was playing Whack-A-Mole, and relentlessly asserting his tough-guy chops. He’s Manifest Destiny in a cowboy hat and fringed gauntlets. He’s everything Ann is not.

Elvis’s motor runs much slower, he’s a twitchy, self-proclaimed mamma’s boy, proud of what he’s accomplished, but still always the loner and the underdog. Teddy can’t get his brain around how Elvis envisions and embodies success. They each see the other as kind of monsters, which they are, but they can’t help liking each other and being energized by the combustive chemical reaction between them. Together, they ride roughshod over Ann’s pilgrim’s progress as she tried to energize her life and overcome her demons.

The TEAM, led by Artistic Director Rachel Chavkin, is celebrating their tenth anniversary as a collective in 2015. Their works are created collaboratively and RoosevElvis was directed by Chavkin and created along with Jake Margolin, Libby King, Matt Hubbs, Nick Vaughan and Ms. Sieh. It would be easy for this high-concept, convolutedly executed work to descend into intellectual preciousness. It doesn’t, thanks to the depth and color given to the two sets of characterizations presented, Ann and Brenda and Teddy and Elvis.

Ms. Sieh’s Teddy is a joyously exuberant cartoon of the male life force that the actress both mocks and revels in. She’s all furiously beating heart. The fortuitously named Ms. King channels the soul of the dearly departed King of Rock n’ Roll, but it’s the tender strength she finds in her portrayal of Ann that grounds this terrific piece of theatrical imagination. In Ann’s hope, vulnerability and her love of her hero, she embodies as much spirit and strength as anyone charging up San Juan Hill. 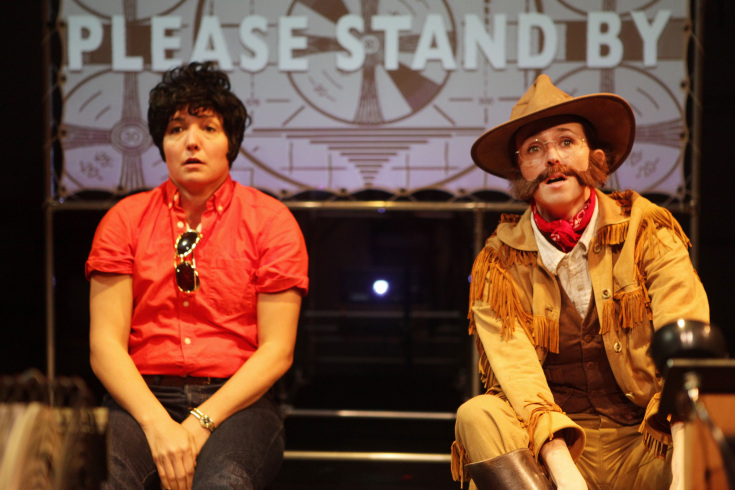