The New York Observer has learned that Chris Christie for President has landed a highly coveted name to be its finance chairman for a 2016 campaign that is quickly taking shape. As soon as the end of this week, Mr. Christie will announce that Dallas investor Ray Washburne will be its new finance chair, tasked with raising the $80-100 million it is expected to cost to win the GOP nomination.

Mr. Washburne most recently served as the Republican National Committee finance chairman, taking the reins after the party’s failure to win the White House in 2012.

Reached on Monday afternoon, Mr. Washburne would not directly confirm the appointment but did tell the Observer, “I’m finance chairman of the RNC and we have our annual meeting this week in San Diego and I’m not standing for re-election. All I’ll say is I’m going to be very involved in 2016, but stepping down should be very indicative of what I’m thinking about. I wouldn’t say you’re reporting anything incorrect. But Chris hasn’t announced anything yet and he’s going to one last governor’s inauguration in Maryland, but I don’t want to say anything more than that.”

The developer of shopping malls and other real estate is a co-founder of M Crowd Restaurant Group, which operates the Mi Cocina and Taco Diner restaurant chains, Mr. Washburne also logged some time in the publishing world, though that did not turn out as favorably as his other endeavors. He was a major fundraiser for Mitt Romney’s 2012 campaign, hosting the nominee several times in his home in the posh Dallas suburb of Highland Park. The tall and good-looking developer also married well—his wife Heather is a member of the Hunt family, which sold Hunt Petroleum for more than $4 billion in 2008.

Mr. Washburne brings to the table many assets the Christie campaign feels it badly needs. The most obvious is access to cash, as the wide, unsettled field will certainly set a record for what is going to be spent to attain the GOP nomination. But Mr. Washburne checks other boxes, as well.

As a prominent Southerner, he immediately establishes Mr. Christie’s credentials as a national candidate, able to tap wells outside his Northeast home base. He also makes clear that the New Jersey governor will compete everywhere for support. Many will undoubtedly have expected prominent Texas fundraisers to sign on with Jeb Bush, whose family branches in the state are obvious, or Texas Senator Ted Cruz, or Texas Governor Rick Perry, all of whom are widely expected to run for president, as well.

Then there’s the ideological box. Mr. Washburne is the co-founder, along with George Seay III, of Legacy, the group of “affluent Evangelicals” who became an important screening committee in the aughts, as well as a critical funding source for presidential hopefuls. Mr. Washburne’s endorsement will send signals that Christie has been koshered as a conservative to primary voters worried about the right-wing bona fides of a governor from a high-tax, deeply blue state.

Mr. Washburne plays at least a minor role in the recent flare-up surrounding Mr. Christie’s devotion to the Dallas Cowboys. He owns a suite adjacent to owner Jerry Jones’s suite and was on hand for the famous orange sweater playoff game two weeks ago. Two years earlier, Mr. Christie attended the 2013 Cowboys season opener against the Giants as a guest of Mr. Washburne during a trip to raise money for the RNC and raise his own national profile. Mr. Washburne’s brief tenure as a publisher was marked by a short-lived resuscitation of Texas Business that included a puff piece on Jerry Jones that was criticized for its timidity.

According to a source inside the Christie campaign, Mr. Washburne was willing to buck the Texas-tied hopefuls because “He feels poo-pooed by the Bush family in Texas.” For his part, Mr. Washburne told the Observer that whatever he chooses to do in 2016 “I’m friends with the Bush family. I was one of W’s big bundlers in 2004. It’s not any kind of slam on Jeb, I just think Chris is ….” Mr. Washburne declined to finish the thought, saying “I’ll tell you more later, you’re going down the right track.”

Another Texas source who knows Mr. Washburne well said, “Ray has had a lot of success in the Dallas metroplex, but not so much beyond that, even in Texas let alone in Arizona or anywhere else. He has been party chair and done a good job, I just don’t know about his ability to go out and get in a room with the key bundlers nationally. He’s a quality guy, and it’s a coup for Christie. They’re in step as moderates, because Ray supported Kay when she primaried the governor. He’s unproven on the national stage. But he might be great.” The source is referring to a brutal civil war that erupted in the Texas GOP when Senator Kay Bailey Hutchison ran against incumbent governor Rick Perry in 2010.

The strategy of broadening one’s appeal outside of the northeast to raise both money and conservative cred is not new. Another presidential candidate, Rudy Giuliani, had deep Texas ties of his own during his presidential run of 2008. The former mayor used the Lone Star seal of approval as a sign of his own national appeal and deep financial backing. His campaign chairman was Houston legal big Pat Oxford, who had helped steer Kay Bailey Hutchison to the US Senate, his finance chairman was Dallas executive Roy Bailey, and his finance co-chair was James Lee, who had served in that role for Rick Perry and helped land the Texas governor as a key Rudy endorser. The strategy helped Mr. Giuliani raise more money in Texas than any other state besides New York. (And it should be noted that I worked on Rudy Giuliani’s presidential campaign.) Mr. Giuliani’s New York-Texas axis proved formidable, at least when it came to fundraising. With talented New York fundraisers like Ken Langone and Paul Singer having already expressed support for Mr. Christie in the past, plus a national network honed over his two-year term as wildly successful chairman of the Republican Governor’s Association, plus a formidable homegrown team led by New Jersey’s Bill Palatucci and his younger brother Todd Christie, Chris Christie has recruited a clean-up hitter to an already intimidating team.

Reached in Houston, Mr. Lee seemed intrigued by the affiliation. “If Ray is indeed inline to be national chairman for Chris Christie, it’s a very significant step. The two are ideologically aligned and Ray could make an impact in the North Texas area. He’s formidable.”

“If that’s the case,” said Mr. Bailey about Mr. Washburne joining Team Christie, “then Gov. Christie would be fortunate to have such a capable guy. Ray has had a great run at the RNC and has great relationships.”

Even in Texas, it’s a small world of people who can bundle money in the amounts needed for a presidential campaign. At one dinner, hosted for presidential hopeful Tim Pawlenty by Mr. and Mrs. Washburne at his Dallas steakhouse, The Mercury, Mr. Bailey happened to be on hand. One big difference between 2008 and 2016, though, is that Texas supporters of Rudy Giuliani did not risk alienating major home state favorites, other than Ron Paul, whose unconventional insurgent campaigns did not rely on big bundler money.

Mr. Washburne’s embrace of the Christie campaign is sure to send shockwaves felt from Brownsville to Amarillo. 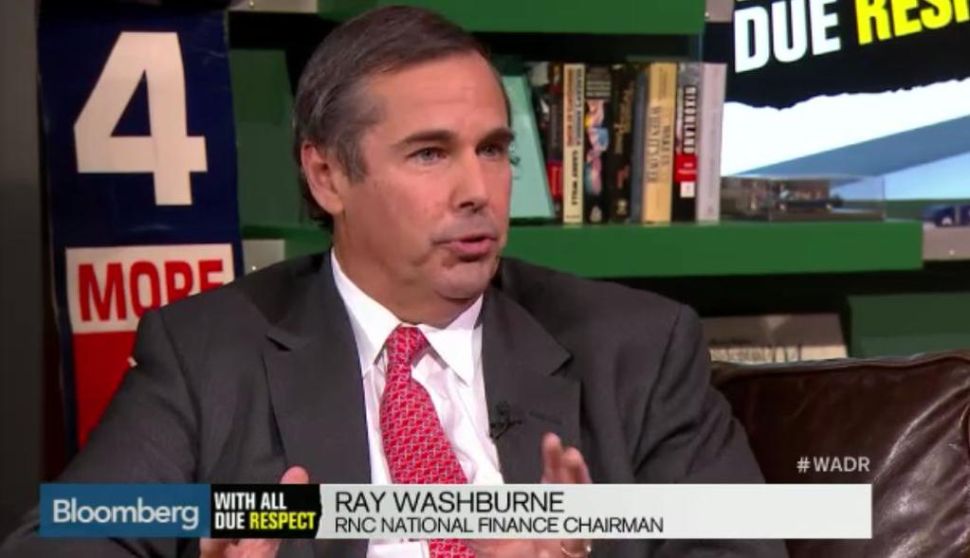