Uber is on something of an acquisition spree in New York, but it doesn’t involve companies. Instead, l’enfant terrible of ride-sharing is acquiring people, and a specific type of people—those with government experience. Last week, the Daily News reported that the company had hired Matthew Wing, the former press secretary to Gov. Cuomo. And now Betabeat has learned that Uber has tapped another politically minded pro, Michael Allegretti, to be Director of Public Policy for New York. Mr. Allegretti will start next week with three goals: managing political relationships in New York, analyzing policy proposals and doing community-level hearts and minds work to “work Uber into the civic fabric of the city.”

“I’ve been watching Uber and the broader sharing economy for the better part of four years,” Mr. Allegretti told Betabeat, “and I think it represents the absolute best in tech, innovations, and the power of competition to improve services.”

Mr. Allegretti ran for the Republican seat in New York 13th congressional district in 2010 with the backing of his party, but was overtaken by a then-unknown Michael Grimm, long before Mr. Grimm would become nationally and locally reviled, plead guilty to tax evasion, and have to resign his reign in Staten Island. Mr. Allegretti has also served as a director for the Partnership For New York and as a senior advisor on environmental policy at The Climate Group.

Regardless of his deep background in city politics and analysis, Mr. Allegretti is inheriting a nightmarish war between Uber and NYC. Just in the past 24 hours, Uber has been running its entire NYC operation out of just a single base, as the other five have been immediately suspended by the Taxi and Limousine Commission while Uber withholds driver data.

Mr. Allegretti was careful enough not to directly address any of Uber’s recent controversies when we spoke to him—already nailing it in his new role, this guy— but we still asked if he was worried about joining Uber’s political front at such an extremely turbulent moment.

“What I’ll say is that I’m thrilled to be joining Uber, and working partners in government and the community,” he said. “So no.” 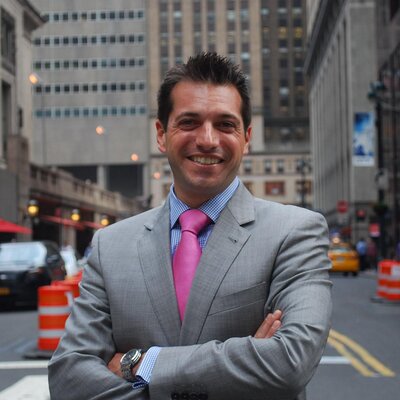