After Ohio State’s Ezekiel Elliott scored his fourth touchdown in Monday night’s college football championship game, one of the officials—in the corner of the field, in the lower left of the TV screen—patted him on the back as he jogged back to the bench.

Such scenes are unusual in major college football, where the officials are supposed to show no such appreciation, but the Buckeyes’ 42-20 victory over Oregon was an unusual game and this was the final minute of the first mini-tournament for the title.

Most teams that cough up four turnovers—the way Ohio State did—would lose, probably badly. The Bucks treated the fluffs like flies at a picnic, shooing them away before digging in and blasting the Ducks with runs up the gut. Elliott had 246 yards on 36 carries.

For all its high crimes and misdemeanors, its hypocrisy and its cant, college football can be fabulous entertainment and Monday’s game was a classic example. The Ducks cut the lead to one point in the second half and the Bucks just stayed cool, kept their composure and wore down the team with the fancy offence from West Coast. They pounded them and beat them up the way they do to so many Midwest teams.

Yes, Ohio State’s Joey Bosa got away with a dirty late hit against Heisman trophy winner Marcus Mariota that put the quarterback out of the game for a few plays in the fourth quarter. So what? The Ohio State players seemed to say. That’s how we play. “I’m playin’ football,” Bosa said, if TV lip-reading proved accurate.

But it was the Buckeyes’ offense that delivered the big blows and their attack was steered by a third-string quarterback, Cardale Jones, who stepped in last month in place of the injured Braxton Miller (pre-season) and J.T. Barrett (late-season).

When Jones wasn’t carrying or passing, Elliott ripped through the middle of the Ducks defense in a way that probably had Woody Hayes and Bo Schembechler slapping clumsy high-fives somewhere in football heaven.

Their conference, the Big Ten, has been downgraded in recent seasons as slow, old-fashioned, unable to recruit top high-school kids, past its prime. The Big Ten was thought to be old-school, and not in a charming way. Some people ranked the conference fourth or fifth among the Big Five.

So then the scarlet-and-gray Bucks beat the white-clad Ducks black and blue. Persuaded a nation, perhaps. 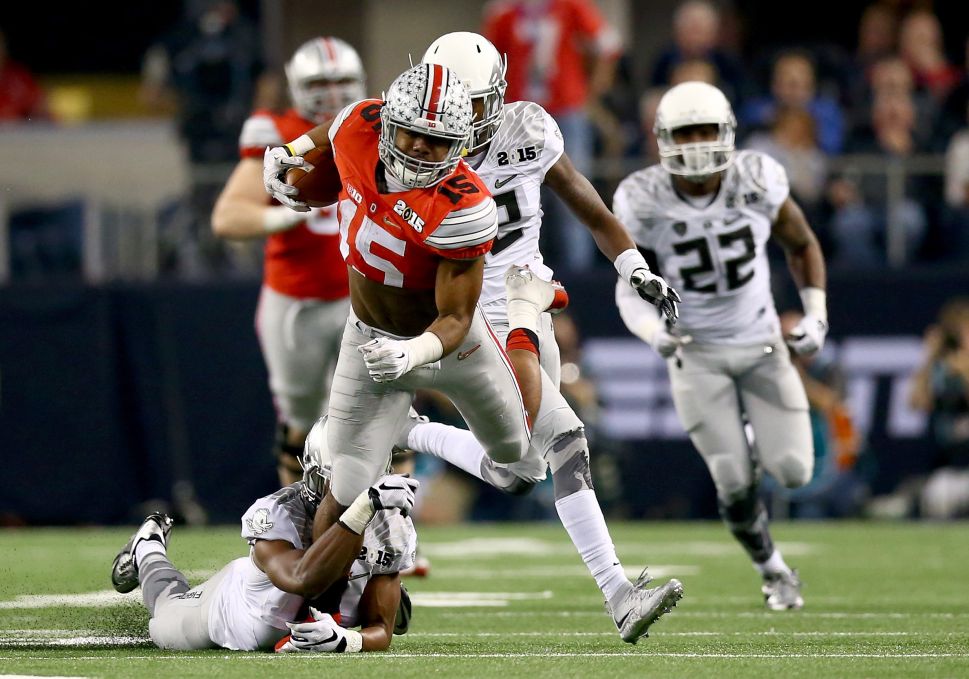