Rafael Fajardo welcomed Ana Maria Amin with open arms, but, he insists, without clutching as feverishly as those overlords in the opposition, who, he insists, drove the new Elizabeth Board of Education President out of their camp with their intimidating ways.

“They have asked the Board of Education president to resign,” Fajardo told PolitickerNJ. “If she doesn’t do what they want, if she doesn’t vote their agenda instead of her own conscience, she is supposed to resign.”

“Where is the senate ethics committee?” said the Board member and longtime leader and organizer of the Elizabeth Board of Education. “Where is everyone calling out foul and allowing powerful politicians to intimidate, allowing power bosses to do this to this great nation and this great state?”

Amin’s decision to reject Lesniak after running on a ticket of Lesniak allies secured what Fajardo allies hope will be a 5-4 edge to retain composition of the school district as it now exists.

Sources close to the senator say the fix was in all along, and have likened Amin to a “Trojan horse.”

“I don’t understand how they come up with such nonsense,” Fajardo said. “This is an individual who drew number one on the ballot and they went with her. They went to her. I do understand that she has seen the light. She understands that their agenda is a destructive agenda. She was not a plant. She never has been but I welcome her to stand up against powerful forces. It takes courage to do that, and we’re so glad that she has done that. She has a kid in the Elizabeth Public School System and she does not want to be part of destroying it.”

Despite Fajardo’s insistence that no deal existed with Amin, he and his allies did elect not to attack Amin, instead focusing their campaign salvos on her running mate, Malik Jackson, a darling of the organization.

But Fajardo in the past has stayed away from campaign attacks on women, including Lesniak’s key ally Assemblywoman Annette Quijano (D-20).

By his reckoning, Team Lesniak’s most threatening gesture since reorganization has been what Fajardo says is their certain intention to get rid of current Superintendent Olga Hugelmeyer.

“We know they had in their plans to fire the superintendent of schools, a woman who is recognized as a tremendous leader,” Fajardo said. “Look at other Abbott districts in the State of New Jersey compared to us, a 26,000-children district with school uniforms and high achieving Blue Ribbon schools.

“It’s one thing to hate Rafael Fajardo,” he added. “It’s another to dismantle an educational system that is as successful as we are. Elizabeth High School is one of the top high schools in the state and in the country. We are responsible to the taxpayers and they were going to dismantle our agenda because of bosses. Ana Maria Amin was inside the belly of the beast and she realized she didn’t want to be part of that. The Lord works in mysterious ways, and I do believe the Lord touched Ana Maria’s heart.”

Fajardo said the opposition also wants to take over the school’s legal department.

“They wanted to have all their attorneys online so they could bring up different issues with the superintendent,” he said. “They wanted to give contracts to Ray Lesniak’s politically connected firms and do all kinds of legally maneuvering to damage the Elizabeth Board of Education staff.”

After holding onto re-election in 2011 in a close battle with Fajardo, the senator and his forces racked up political capital with the 2012 indictment of School Board President Marie Munn, a Fajardo ally, and other Board of Ed indictments.

Lesniak won his 2013 re-election handily in the face of a wounded BOE.

And although Fajardo and his allies are convinced the senator’s forces overreached with the use of an independent super PAC and once again gave them a moral upperhand in this longstanding war, Lesniak is now confident that a court will nullify the results of a board of education meeting two weeks ago wherein the board installed Fajardo – beaten last November – back on the board as a replacement for Tony Monteiro.

The senator told PolitickerNJ that Fajardo will get bounced – again.

He’s confident he will stay on the board – and run again for that seat this year.

“I spent my youth working for the City of Elizabeth,” Fajardo said. “My three kids went through the Elizabeth School System. All three of them are highly educated. My grandchildren are in the school system now. What, am I going to walk away from doing what is right? How can I look myself in the mirror? I am going to continue to do what I have to do.” 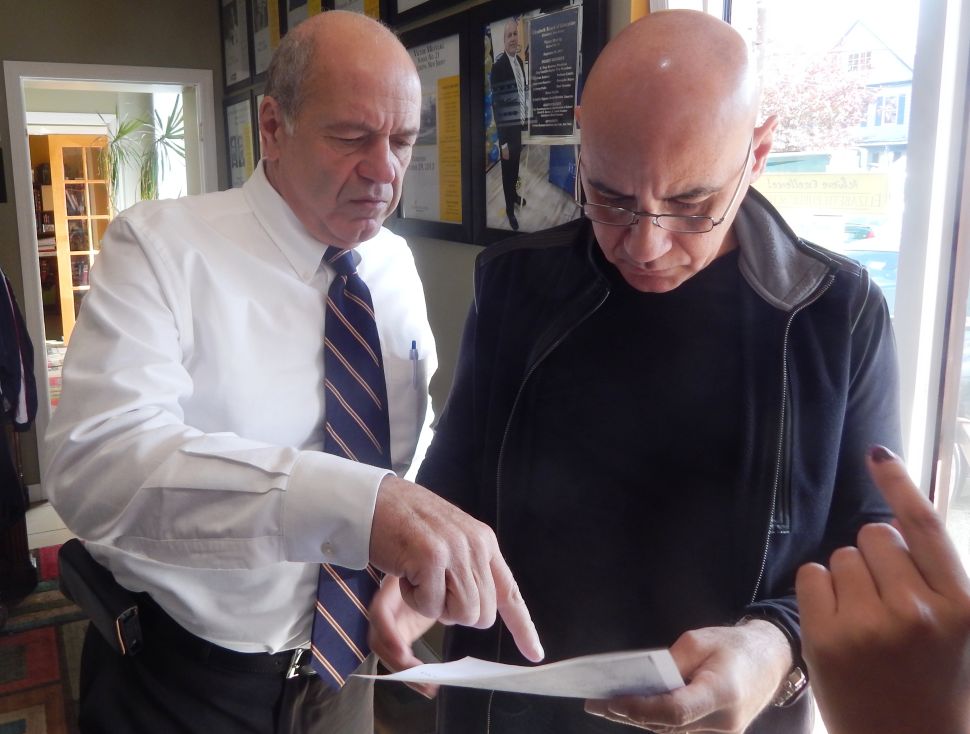