Republican Assemblyman Sam Fiocchi (R-1) has only spent a little over a year toiling under the gold dome here in Trenton, but he’ll likely face a real test before the clock runs out on his second.

Fiocchi, a former freeholder in his home Cumberland County, is up for re-election this year in South Jersey’s first legislative district. It’s a battleground likely to turn out to be one of the most competitive in 2015 electoral politics, as it neighbors LD1 and encompasses a sliver of Atlantic County, both ground zero for the state’s ailing gambling mecca.

“My focus has been doing my job in the assembly, learning what I have to do and moving up,” Fiocchi told PolitickerNJ following his hearing with the Senate Human Services committee today, referring to his first year in the legislature.

Republican leaders in South Jersey note the two districts will be competitive, and at least one candidate in the party has already stepped up to challenge the Democratic incumbent in LD2, where Assemblymen Chris Brown (R-2) and Vince Mazzeo (D-2) have been going head to head over the search for solutions to Atlantic City’s economic woes. Atlantic County Freeholder Will Pauls announced his bid to join the ticket with Brown late last year and, with establishment support and strong labor ties, could very well be the candidate Republicans tap to pick off Mazzeo.

In his own district, Fiocchi said the party has yet to select a running mate, but Republicans also think they see a potential pickup in the seat currently occupied by Democratic incumbent Assemblyman Bob Andrzejczak (D-2).

“In the near future we’ll be talking with chairman and discussing what our plans are and our possible running mates,” said Fiocchi. “But the focus has really been doing my job here, doing my job in the Assembly.”

Fiocchi said much of Republicans’ focus down there has been on aiding Brown, who’s fought with Democrats in recent months over legislative efforts aimed at economic relief for Atlantic City. Brown has stood against the casino closures that have wracked the city, as well as Democrat-endorsed proposals to expand gaming to other parts of the state.

“Assemblyman Brown has been on the forefront of trying to address a lot of these problems in Atlantic City, so mostly what we’re talking about is how I can help his district with making a better Atlantic City, revitalization and all that,” Fiocchi said.

Brown’s most recent clash with Democrats on the issue came during deliberations late last year to pass a bills package that would give tax breaks to cash-strapped A.C. casinos, but as a consequence raise taxes on other municipalities throughout the county. Brown’s own plan nixed the casino tax breaks in favor providing county-wide taxpayer relief, arguing it was more fair.

“I wasn’t in favor of those bills,” Fiocchi said of the Democrat-sponsored PILOT package. “I didn’t think they were well thought out, and they rushed it through committee, and it didn’t make it through the Senate. I think that pretty much tells you that they weren’t comprehensive.”

Republican leaders in South Jersey have said the process for selecting Fiocchi’s running mate will begin later this spring, and that they plan to “vigorously defend” Fiocchi’s own seat against any Democratic challenges. 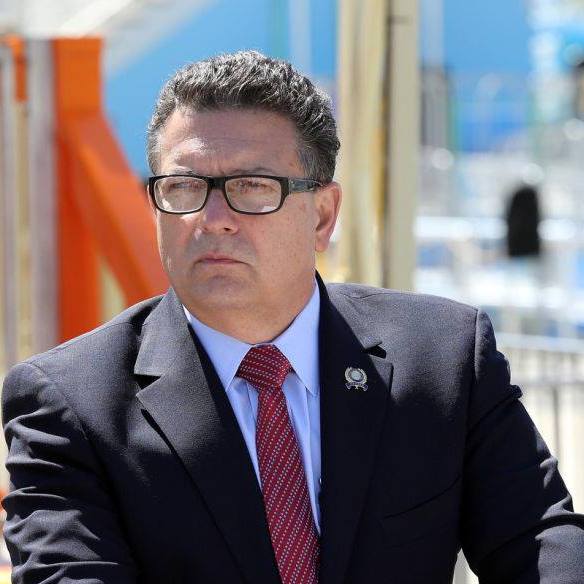