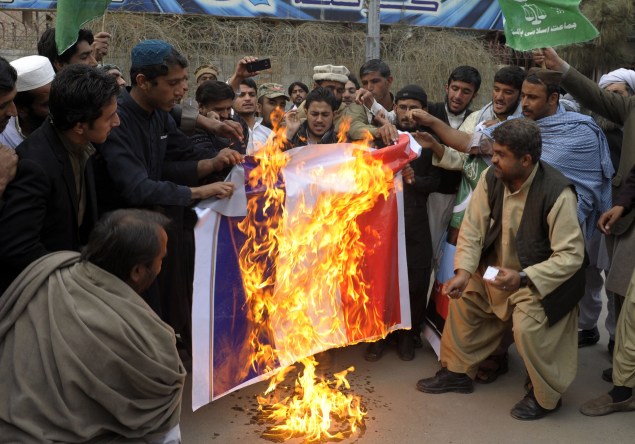 Pakistani demonstrators burn a French flag during a protest against the printing of sketches of the Prophet Muhammad by Charlie Hebdo. (BANARAS KHAN/AFP/Getty Images).

I am still thinking about the terror that rocked France earlier this month.  I can think
of little else. And I expect that I will continue to be consumed by
the events and continue to analyze the terror and the events leading
up to the attacks and the responses to the horror that shook Paris for
a long time to come.

I hesitate to compare the terror attacks perpetrated in France to
9-11, but I must. Obviously, 9-11 was more horrific and more
dastardly and set the tone for events to come. It was our first
colossal terror attack perpetrated by Islamic terrorists  It was the
first such attack to rock and to shock the Western world. It was an attack that stunned the United States.

This was a 9-11 moment for France. And the pain and fear that overtook
France was shared by the rest of the Western world.

These terror attacks are a challenge to the democratic core of French
culture, a heritage that dates back to the French Revolution. More
than that and worse than that, the terror gave voice to the Muslim
immigrant community in France that does not want to assimilate. For
generations the secret to acceptance in France, the secret quickly
learned by other immigrant communities, was that to become French you
had to learn French. And you had to speak with an authentic French
accent.  Many Muslims in France have no interest in blending in, no interest in embracing French culture. Instead, they want to change France.  Instead of becoming more French, they want France to become more like them.

France has long bent over backwards in a bid not to offend the
Muslims in their midst. The French were the backbone of the “Arabists,”
who would regularly articulate the Muslim point of view to
the West.  And French diplomats often rebuked Israel and side with the Palestinians.  As recently as
a few weeks ago, in the vote taken by the UN Security Council on the creation of a Palestinian state, the French gave a big resounding “oui”. 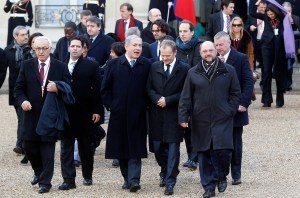 Israeli Prime Minister Benjamin Netanyahu leaves the Elysee Palace to attend a Unity rally in tribute to the victims of a three-day killing spree by homegrown Islamists (Getty Images).

So it was no surprise that Haaretz, the Israeli daily paper of record,
sent out a screeching alert that Israeli Prime Minister Benjamin
Netanyahu was going to Paris to participate in the mass rally that was
planned—that the Israeli prime minister would be marching along in
defiance of terrorism and standing in support of the fight against
terror by honoring the seventeen French victims, four of whom were
Jews murdered in a kosher supermarket.

The kicker is that French President Hollande did not want Israeli
Prime Minister Netanyahu to attend the rally. Netanyahu went anyway.
And the two leaders came to an understanding.

Hollande had serious cause for asking Netanyahu to keep out of his
rally. He was concerned that the presence of both Netanyahu and PA
President Abbas might steal the show. He thought the spotlight would
shine on them and the lack of progress in their negotiations towards
peace, overshadowing the raison d’etre for the rally.  He knew that
Netanyahu would arrive with a very large delegation and a very large
security team making the rally very difficult to manage.

And then there was the question of dual loyalties. With the threat of
terror hanging over their heads and the alarming, rampant, rise of
anti-Semitism throughout France, Netanyahu has been calling on French
Jews to move to Israel. This offended the French, who have yet to deem the threat to their Jews as substantial.

There’s more. Hollande and his advisers do not believe that terror in
Israel can be paralleled to the terror they face in France. The French
government maintains that in Israel, terror is understandable. It is
political and, therefore, in their eyes it is justified. In France,
the terror is Islamic. Netanyahu speaks about the Western world
working to together to confront the same threats. France decidedly
disagrees.

In the end, thankfully, all fears were groundless. And how would it
look if the prime minister of Israel announced that he was going to
France and then changed his plans. And how would it look if he was not
at a rally in honor of four Jews brutally murdered in a kosher market,
all now buried in Israel.

I’ll tell you how it would look. It would look far worse than if the
president or vice president of the United States was not there. 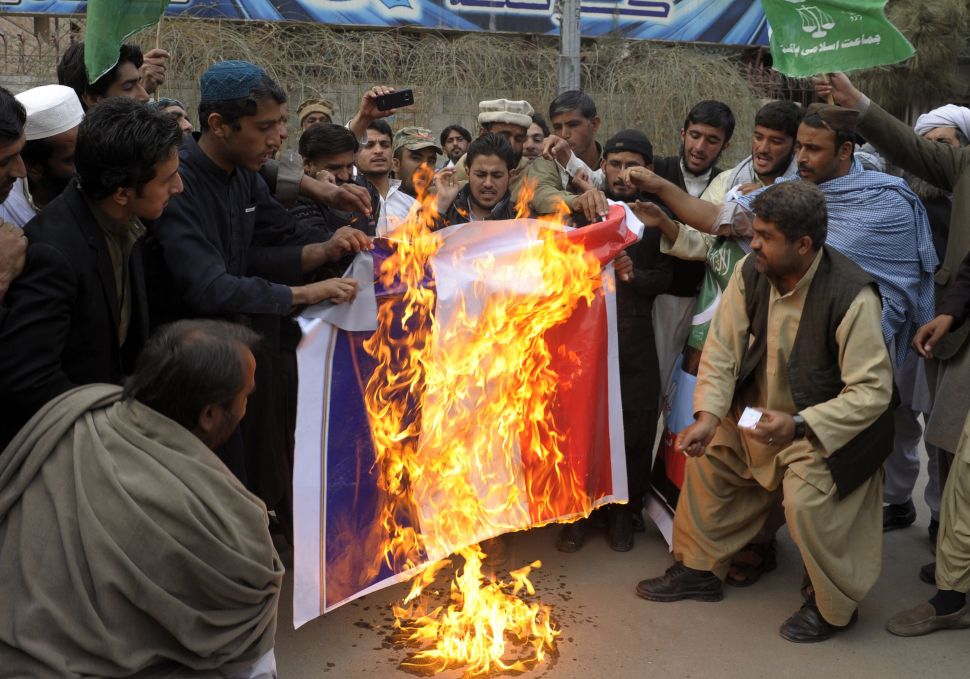