One man, 37, Jewish-American, is the grandson of Holocaust survivors who took a commonplace road from the suburbs to Wall Street. Then, he decisively swerved on to a different track to the U.S. Marines, war in Iraq, and ultimately the home front of Hudson County politics.

Another man, 44, African-American, is the son of one of the most prominent poets of urban America who was molded by the civic blast furnace of Newark’s 1967 riot, or rebellion, pick your own term. Learning his lessons well, the son became a poet in his own right, a teacher, a principal and ultimately a politician.

The roads of the first man, Jersey City Mayor Steve Fulop, and the second, Newark Mayor Ras Baraka, converged during last year’s Newark mayoral race. Fulop, knowing that the eyes of New Jersey and even national politicos were on him, rolled the dice hard and backed Baraka.

Baraka’s win cemented a burgeoning alliance with Fulop that has two key implications.

Baraka and Fulop, together with Paterson Mayor Jose “Joey” Torres, all Democrats, are building a tripartite alliance of New Jersey’s three largest cities meant to focus on urban concerns at a time when there is little to no guarantee of state aid because of budgetary issues.

The speculation over the 2017 Democratic gubernatorial nomination derby adds to the importance of the political partnership of Fulop and Baraka. Fulop’s ties to Baraka bolster his potential northern alliance of Bergen, Hudson and Passaic Democrats; it also gives Baraka some possible leverage against his rival for Essex supremacy, Essex County Executive Joe DiVincenzo. State Senate President Steve Sweeney (D-3), Fulop’s southern rival for the 2017 Democratic gubernatorial nod, is a DiVincenzo ally.

While this Gordian knot of urban and statewide Jersey politics would leave many at loose ends, Fulop felt it was easy to describe the ties that bind.

“People prejudged [Baraka] on how he would be as mayor, like a bull in a china shop, and what they found is that he’s actually willing to work with everybody. He’s been a great partner,” Fulop said. “Jersey City and Newark, being the largest components of Hudson and Essex respectively, are going to be important. That said, nothing happens unilaterally. Ras has become a friend. We talk about anything and everything. There is a good degree of trust there that will give me a different perspective on things. If you would have taken a look back at us in high school, you wouldn’t have said these two guys are going to be friends. But we’ve built a friendship outside of politics.”

Baraka believes that political life has helped forge his personal friendship with Fulop.

“Our friendship has grown through struggle together, and not just through the campaign. We’re fighting for similar things,” Baraka said. “We depend on each other, and we bounce things off each other. Our relationship is important in North Jersey, but it’s also an important example of how government should work in general.”

For those who would like to view Fulop and Baraka as a political odd couple, a certain pop culture concept comes to mind: the 1970’s TV show The Odd Couple, the saga of the fastidious Felix Unger and the slovenly Oscar Madison.

It would appear that Fulop, an inveterate social media maven, would be Felix, while Baraka, a poet, would be Oscar, a sportswriter.

But Patrick Murray, director of the Monmouth University Polling Institute, pointed out that like the actors who played Felix and Oscar after the show went into syndication, Fulop and Baraka have an important reason not to worry, and to stick together.

“They don’t owe a lot of other people for where they are right now, which is different from a lot of other players in this game,” Murray said. “Both Baraka and Fulop have risen to prominence by basically beating the party system. Therefore, they don’t have a lot of people who have claims over them as they move forward. They have more of a free hand as to what they are going to do.” 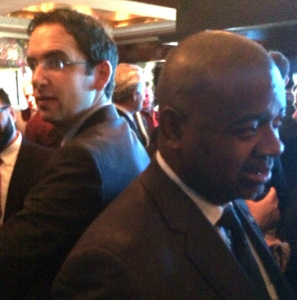