“I love the fact that he referenced for five minutes the Jersey City re-entry program and what we’re doing with addiction treatment as a model,” Fulop told PolitickerNJ. “It’s too bad he couldn’t say the words ‘Jersey City.'”

The initiative mentioned by Christie during his approximately 40-minute address emerged from a state-created task force co-chaired by Jim McGreevey, the former Democratic governor, and Pastor Joe Carter of Newark’s New Hope Baptist Church. The program, which will be run by a non-profit led by McGreevey, is designed to set up one-stop services centers for ex-offenders battling addiction as they leave incarceration or drug court and re-enter society.

The centers, which will help ex-offenders get treatment, as well as find temporary housing and employment and training services, will be located in Newark, Paterson, Atlantic City, Toms River, Trenton, and Jersey City.

The program McGreevey is behind had its start in Jersey City under the administration of Fulop, who has a close political relationship with McGreevey.

The atmosphere surrounding Christie’s 2015 State of the State address was tinged with national import as New Jersey’s governor appears to be on the verge of entering the 2016 Republican presidential primary race. Yet Fulop, who is often named as a potential 2017 Democratic gubernatorial candidate, kept his focus limited on his city’s limits.

“I wouldn’t expect him to go overboard and say my name. Nevertheless, it’s a nice validation that what we’re doing is a model for the state that they’re going to replicate,” Fulop said with a smile. “I think we’ve referenced Governor Christie when we appreciate things that he does, and we’ve referenced him when we differ. I wouldn’t expect that to change in one way or the other. Obviously, the words ‘Jersey City’ are never going to be uttered by him. My first objective is to get him to integrate the words ‘Jersey City’ and to feel comfortable in saying ‘Jersey City’ as part of what’s he’s emulating as he speaks about bipartisanship. I think that would be a positive thing.”

“I’m just happy that he referenced the program,” Fulop added before heading home. “For five minutes.” 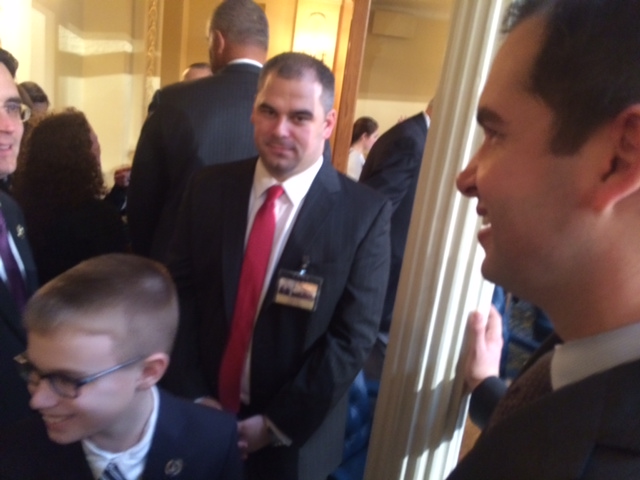