G-Eazy performed two sold-out shows at Webster Hall this weekend and a lot of college-aged girls made out with their boyfriends before the Oakland native jumped on stage Friday night for his “From the Bay to the Universe” tour.

The 25-year-old rapper, singer and producer delivered to a packed house at the iconic New York venue with support from a DJ, live drummer, bass-heavy beats and slicked-back hair during his one-hour set.

The RCA Records artist, who at times sounds like a West Coast Drake with a style reminiscent of G. Love in his younger days, gave his fans what they came for and received no shortage of screams in return.

At the high points during Friday night’s show in the East Village, G-Eazy wooed the crowd with some of his catchiest songs and showed genuine affection for his fans.

At other moments, the Billboard-topping artist rapped about himself in front of a screen showing looped videos of his face.

Still, the ladies (and a fair amount of the fellows) loved it all the same.

During one emotive chat with the crowd in between songs, G-Eazy told his fans, the bartenders and everyone else listening that he had opened for his first tour at Webster Hall—down in the venue’s basement—several years prior. Started from the bottom now he’s here. Likewise, the recently signed Bay Area rapper began publishing music as a teenage artist on Myspace in 2007 and rose to outsell Phish within the past year.

Near the end of Friday night’s show, the 6-foot-4, skinny-jeans-wearing rap star asked all the single ladies to put their hands up. A lot of hands responded.

He then asked all the ladies who left their boyfriends at home to do the same. That led to two angry guys dragging their girlfriends out of the performance hall. If only we could hear what was said during those exchanges.

But, hey, these things happen. 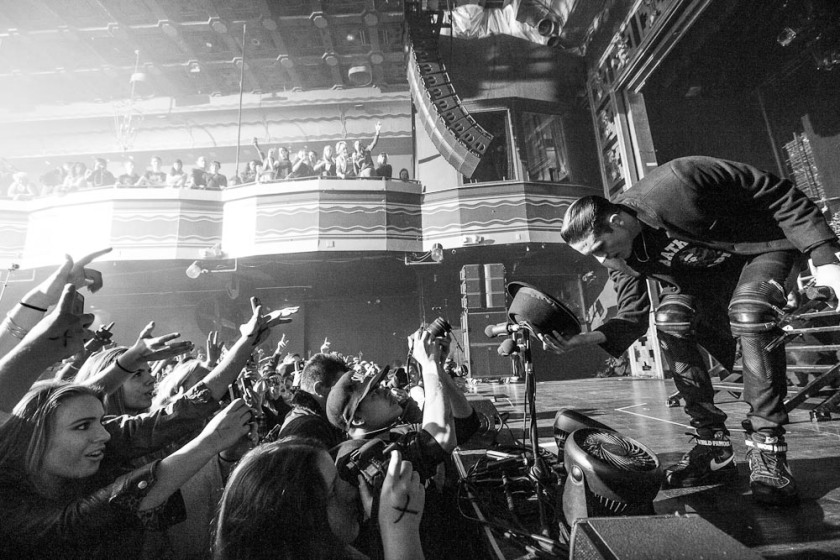