Note: This story has been updated at 8:02 p.m. with new information.

That was the advice from Gov. Andrew Cuomo today as a massive blizzard approaches New York City, bringing with it what could amount to historic levels of snowfall and corresponding chaos.

“Four o’clock, five o’clock, six o’clock tonight, you want to be home and you want to stay home,” Mr. Cuomo urged New Yorkers at a storm briefing in his Manhattan office. “This is not an evening or a night to be out and about.”

Mr. Cuomo declared a state of emergency in New York, and outlined plans to close roadways and limit public transit as the storm wallops the city with an expected 20 to 30 inches of snow and strong winds, according to the National Weather Service.

The MTA will continue normal subway service until between 7 p.m. and 8 p.m., Mr. Cuomo said, before implementing only “limited service.” And beginning at 11 p.m., subways—and the bus, and all other public transit—will stop running, coinciding with a ban on vehicular travel announced by Mayor Bill de Blasio.

“So as we have been saying for the past few days, you should plan to leave work early,” he said.

While MTA Chairman Tom Prendergast originally said a full MTA shutdown was unlikely—noting it was a key means of travel for essential workers like those at the MTA—Mr. Cuomo announced the shutdown late Monday afternoon, after a new National Weather Service briefing.

The Long Island Railroad and MetroNorth are slated to close at 11 p.m. tonight. PATH trains to New Jersey will run until 11 p.m., and will then close.

It is the first time all MTA services will be shut down for a snowstorm in the city’s history—though the system was also shut down during Hurricane Sandy. The goal, Mr. Cuomo said, is to protect the system’s equipment.

After 11 p.m., it will become largely impossible to get around the city, at least if a resident wants to follow the law. There will be no public transit running in the city, and cars and taxis will not be allowed on the streets. Those trying to evade the driving ban may be arrested, Mr. de Blasio said this evening.

The blizzard comes a few months after Buffalo was buried in seven feet of snow in November. But the governor didn’t take the bait when asked why it took so much less snow to cripple New York City’s operations.

“It’s all relative. Seven feet of snow, you get the attention of the people of Buffalo. Two feet of snow, you don’t,” he said. A reporter asked if Buffalo was tougher, and governor responded: “I’m not getting into that, but they do know their snow up in Buffalo. That I can tell you.”

This story has been updated to include Mr. Cuomo’s late-afternoon decision to close the subway system. 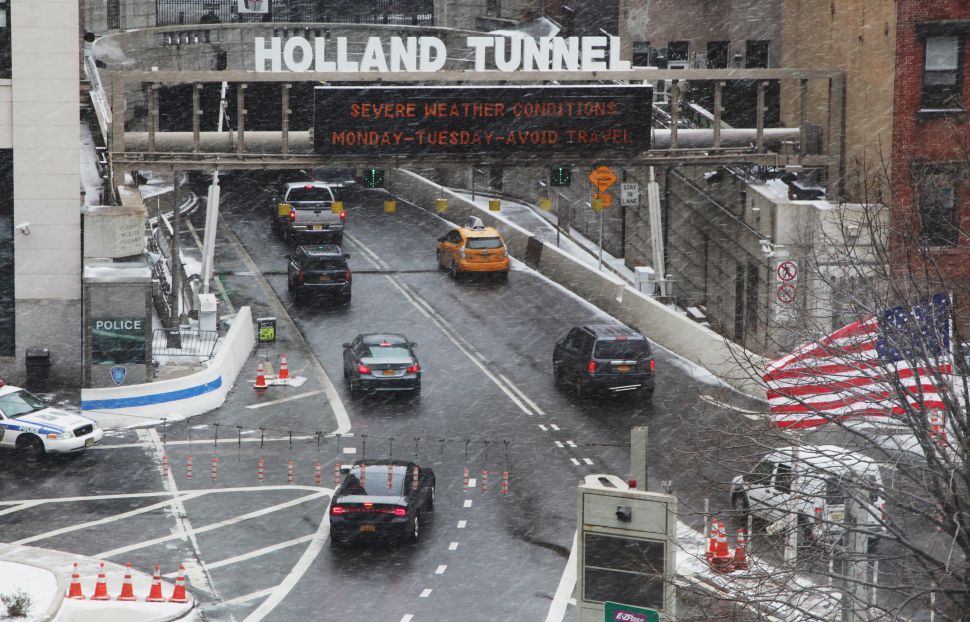