I, personally, do not have balls. But what I hear from people who do have balls is that chafing—i.e., the friction caused when your balls rub up against your legs (OMG I am so happy I don’t have balls)—is a serious problem.

Because Kickstarter is home to some of greatest innovators of our time, there’s now a crowdfunding campaign for HappySacs: literally, a protective pouch for your balls. According to the campaign page, you can “think of it as under-underwear”:

HappySacs were designed with one purpose and one purpose only. To keep you comfortable all day long. The HappySac is a lightweight, breathable, moisture wicking fabric bag worn over the scrotum to prevent sticking, chafing, and overall discomfort. Think of it as under-underwear. Each HappySac is made of the highest quality performance material to ensure you stay stick and chafe-free all day long.

Wow, it’s almost like those revolutionary penis diapers, except this time it’s real!

The HappySac was created by Christian Smith, who apparently had a sweaty, sticky scrotum one day and asked his wife to sew him a comfy little wearable bag. His wife, who as far as I can tell is still married to him, created the HappySac’s first prototype.

After months of experimentation with “size, shape, fabric, elastic and stitching,” Mr. Smith “finally got things figured out.”

HappySacs are now available in sizes small (the “Modest Man”), medium (the “Practical Man”) and large (the “Bragger”), because apparently balls are like boobs—they’re not all sized the same.

There’s also—wait for it—a “performance line” of HappySacs. There’s the ColdSac, which somehow promises to “cool your skin by up to six degrees Fahrenheit,” and the WarmSac, which retains heat, just in case extra-toasty balls are your thing. Or maybe you live in Antarctica.

To all the people without testicles who are reading this, I know what you’re wondering: What’s in it for me?

As Mr. Smith explains, “Regardless of size, some men are constantly adjusting themselves, while others rarely if not at all. Whether you are a man or a woman you can relate to public displays of adjustment (PDA) and nobody likes to see it.” 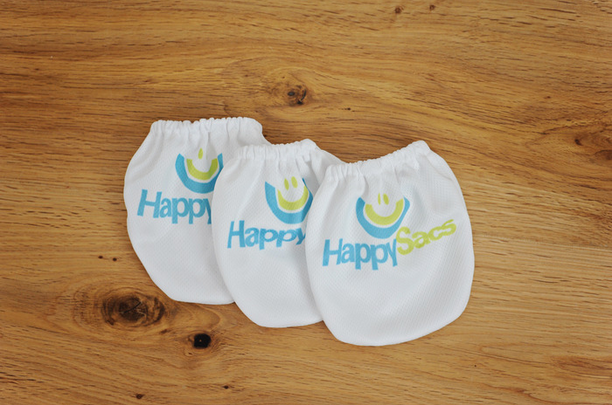