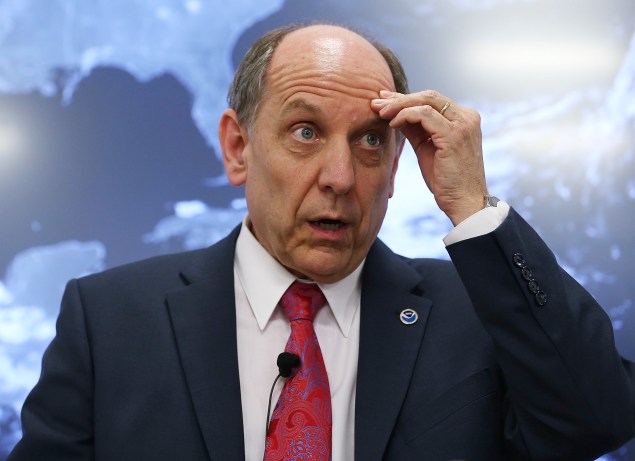 The head of the National Weather Service admitted today that his agency did not do enough to communicate uncertainty about its blizzard forecast for New York City.

In particular, the agency is trying to track down exactly how the words “potentially historic” became attached to the forecast, helping to fuel overblown media coverage and possibly unnecessary storm preparations. Mayor Bill de Blasio repeated the word “historic” during blizzard press conferences, holding up snow statistics dating back to the 19th century in order to defend his decision to close roads and subways and threaten to arrest anyone driving on the roads last night.

Dr. Louis Uccellini, the director of the National Weather Service, told a media conference call at 3pm Tuesday that the agency is now working with “social scientists” about how to communicate serious forecasts better in the future to the public and decision-makers. There is always uncertainty in any forecast, he said.

He said the use of the word “historic,” was put in the headline of a blizzard notification released directly by a local forecast office which had jurisdiction. It was not vetted by anyone in the national communications office or by the director himself.

“We rely on the forecast individuals there and the M.I.C. to vet these forecasts,” he added, referring to the meteorologist in charge of the local office. There are 122 forecast offices in the United States.

Despite saying he was open to change, Mr. Uccellini was also quick to defend his forecasters and even the person who included the word historic in a forecast titled, “Crippling and Potentially Historic Storm Set to Hit…” He said that if the forecast had been correct, the snowfall amounts would have been historic for New York, and they might still be record-setting for Boston when the totals are in.

“If those snowfall events had occurred it would have become a historic event in the NYC area,” the director said.

“We’re working more closely with the social science community with communicating the risk, how we simplify our messages and how we communicate with people who have to make tough decisions,” he said.

Though many blame Mayor de Blasio for overhyping this week’s non-blizzard and shutting the city for no reason, a good portion of the blame does seems to belong on the shoulders of the National Weather Service.

A weather service spokesperson said that once the storm is done, it’s likely a post-mortem will be done to determine exactly which local office generated the “potentially historic” lingo. It’s possible that it came out of conversations between a few offices or out of either the Upton, NY office or the Mount Holly, NJ office, which happens to be the home office of meteorologist Gary Szatkowski, who tweeted his own apology earlier in the day.

“My deepest apologies to many key decision makers and so many members of the general public,” he tweeted after midnight Tuesday morning. He continued in the next tweet, “You made a lot of tough decisions expecting us to get it right, and we didn’t. Once again, I’m sorry.”

During the press call, director Uccellini addressed Mr. Szatkowski’s apology, implying it was hurting the agency because the public needs to understand that these forecasts are not just a matter of one man’s opinion, but an accumulation of millions of points of data, computer models, and discussions.

Near end of call, Mr. Uccellini said there may be another storm about 10 days away from the East Coast, but he was wary of saying too much because it was too far out to know for sure.

“I got to practice what I just preached with bounding these statements with increasing uncertainty as we go out in time. “

Here is a tick-tock roundup of some of the official storm announcements along with contemporaneous tidbits from politicians, mainstream media, social media and other sources. It shows how the attitude towards the storm was far more volatile than the storm itself – much of it triggered by the use of the word “historic.”

• The National Weather Service upgrades a blizzard watch to a blizzard warning effective Monday at 1 p.m. Weather Service graphics project most likely total snowfall for New York City at 10 – 14 inches, minimum 2.4 to 2.8. Max 24. .” Bob Oravec, a forecaster with the weather service told a reporter, “In addition to heavy snow, with blizzard warnings, there’s a big threat of high, damaging winds, and that will be increasing Monday into Tuesday.” Who first called the potential storm “historic” is unclear. A weather service advisory issued the next day certainly used the word, along with “potentially life-threatening.”

• Mayor De Blasio announces, “We are facing most likely one of the largest snow storms in the history of this city. Don’t underestimate this storm.” He holds up a list of the city’s top 10 snowstorms, predicting this could earn its way into records dating to 1872.

• Shortly after noon, Gov. Andrew Cuomo tells New Yorkers they should plan for “major disruptions” during Monday and Tuesday morning commutes. “This is not an evening or a night to be out and about.”

• A CNN report quotes Massachusetts emergency management officials warning that the winter storm would be potentially “historic and destructive.”

• In the afternoon, with only a few flakes falling, Mayor de Blasio announces schools will be closed Tuesday and orders all drivers off the roads by 11 p.m. Monday. The subways will be shut at 11 p.m. He advises New Yorkers remain indoors throughout the duration of the storm. Non-authorized persons caught driving in non-emergency situations will be subject to NYPD summons or even arrest, he said.

• Gov. Cuomo says not preparing enough for other storms is informing the response to this one. “We learned the lesson the hard way. We’d rather be safe than sorry.”

• Most of the city papers assign entertainment reports to compile lists of movies and songs on which stranded New Yorkers ought to binge during the storm.

• New York Times reports that officials are warning people “not to be lulled into a false sense of security by the relatively calm conditions on Monday morning.”

• By 7 p.m. after flurries dumped a few inches on the city and then nearly completely stopped, WNBC’s “Storm Team 4” forecast, “The storm is expected to dump 24 to 36 inches of snow on New York City and its surrounding suburbs.” 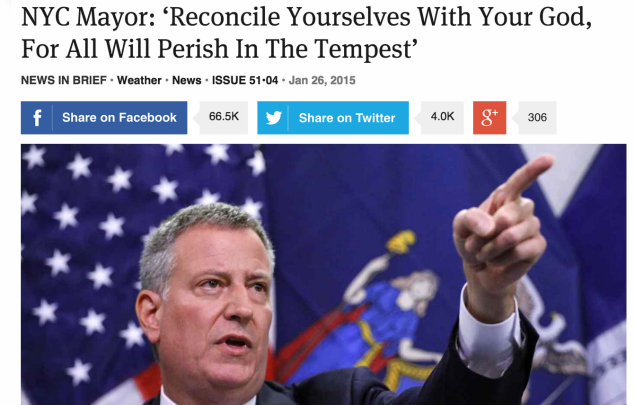 • The Onion suggests readers make piece with their higher powers and await death by storm, writing that de Blasio had issued the following statement: “The furious hoarfrost bearing down upon us knows neither mercy nor reason, and all within the five boroughs will perish, cowering in their brittle dwellings.”

• At 8:55 p.m. most New York City-issued cellphones emitted a bracing alert which sounded not unlike nuclear sirens in an apocalyptic movie: WHEEER! WHEER! WHEER! “All non-emergency vehicles must be off all roads in NYC by 11pm until further notice” the phone read. Undoubtedly the best, most accurate, and most useful reporting during this entire affair was done by Pete Pachal at Mashable  who explained in full and clear detail, using quotes from sources he actually phoned and interviewed, how this cell phone emergency alert system works.

• National Weather Service, 5:21 a.m: “THE NATIONAL WEATHER SERVICE IN NEW YORK HAS ISSUED A WINTER STORM WARNING…WHICH IS IN EFFECT UNTIL MIDNIGHT EST TONIGHT. THE BLIZZARD WARNING HAS BEEN CANCELLED.”

• At 8:48 a.m. with no snow continuing to fall in the city, the Weather Service issues storm snowfall totals of 5.1 inches at JFK airport, 5.5 in Central Park and 3.3 in Brooklyn.

• As the Times reports snowfalls are far short of what was predicted and starts to quote political leaders defending themselves, Gothamist runs a piece from a meteorologist explaining “Why The NYC Blizzard Forecast Was So Wrong.”  “The problem is that the storm moved 50-75 miles further east than most people predicted.”

• A commenter on the Times article writes: “The National Weather Service, or NOAA , is mostly to blame here for their overarching scare tactics and plain inability to accurately forecast. … Fire the lot and start using time tested techniques such as finger in the wind and pressure headaches.”

Listen to press conference call with Dr. Louis Uccellini, the director of the National Weather Service. 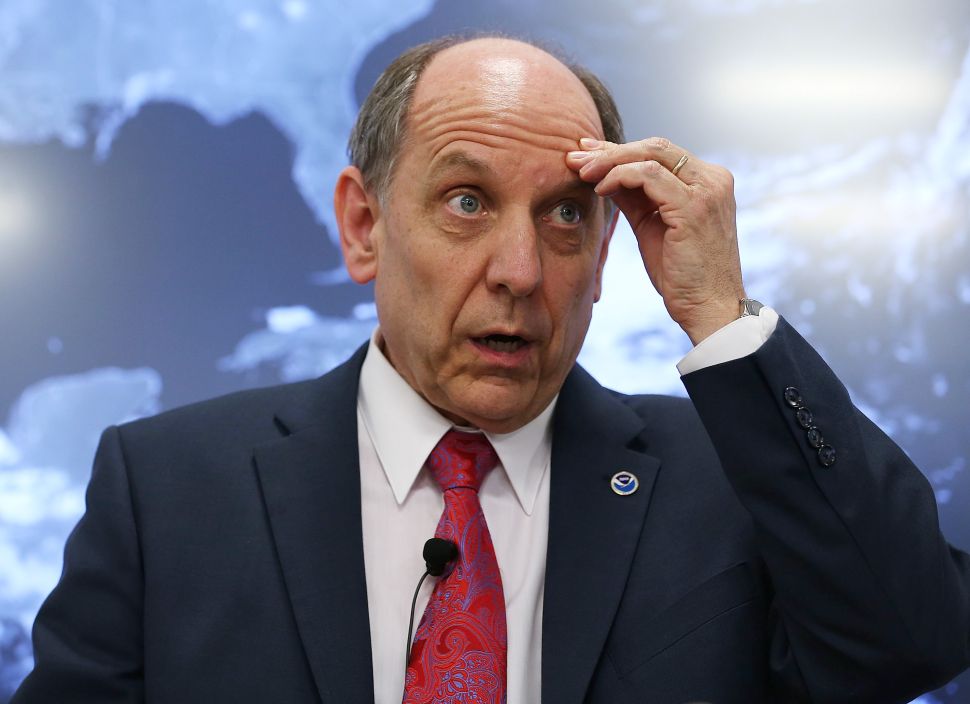