It was Thursday in Chelsea when a gallery director told me about See Saw, an iPhone app that maps out openings in the simplest way possible. You view a finely built list of shows by neighborhood or opening date, press the plus sign next to the slot of a show you plan on seeing, and it appears on a map with all your picks shown as red-hatted pins. I had never heard of the thing, but the director assured me it’s all anyone uses anymore, that it’s the hip, minimalist version of the bulky and expensive Artforum app, and that it was free. He was right. I used it all weekend.

And then, on Sunday, after a dozen Lower East Side openings, I went to Sophie’s with a group of friends who also go to a dozen openings every Sunday, and between tequila shots was introduced to someone who I was told “had this app.” The app was See Saw, and her name was Ellen Swieskowski, its creator.

She was nice, and I was so enamored of her idea—a crisp and clean thing that gets you through a gallery crawl with minimal hiccups or distractions—that we got to talking. But then, Ms. Swieskowski was next on the pool table there at Sophie’s, and before she went to sink stripes, she explained to a friend of mine, a dealer with a major gallery in Chelsea who is also kind of obsessed with See Saw, the reasons behind including some shows and not others.

“I put your last show on there,” she said to the dealer. “But the one before that, I didn’t.”

My friend was less than pleased. I was intrigued. So I called Ms. Swieskowski a few days later to find out more.

“It just kind of occurred to me when I was walking around in Chelsea,” she told me on the phone, taking a break from her day job as a curatorial associate at the Virginia Dwan Collection and Archives.

“I would flip through Artforum and have a running list of shows I wanted to see, and I would make a list, write them out, and arrange them South to North in Chelsea, but everything has been updated, and the art world is really lagging behind,” she told me. “It’s almost like those goofy Seamless ads—why call someone and give them your credit card information when you can just type it in?”

Yes, the Artforum App—technically called ARTGUIDE—has a directory of shows opening this week, arranged by neighborhood. But it’s got a lumbering interface that can be tough to navigate. It has listings for art fairs and special events around the world, but See Saw is simpler, sleeker, cooler—it looks like Facebook next to the MySpace-esque clutter of something like, say, Artcards. It’s just black and white with a robin’s egg blue backdrop. Take a screen shot of the shows you’re hitting and send it to your friends; now your friends are coming to galleries with you. And See Saw has a personally customized map where you can easily add and delete openings like a Spotify playlist, which makes it basically like writing out longhand the shows you want to see.

Not many art kids who spent their time at school co-curating Fluxus shows can whip up a killer mobile interface, so Ms. Swieskowski asked her brother Patrick, a programmer in the city, to help. He coded, she input the info for gallery shows, and then it launched a year ago. There’s no overhead, no investors, no budgets. They meet once a week to update the code and plug in new shows; the one she likes. The galleries get picked because Ms. Swieskowski gets tips from well-placed friends and colleagues, and she just goes to all the galleries herself, too.

And, yes, it’s clear to me too that I appear to be shilling hard for the thing, but when a few smart, hard-working young guns peripherally involved in the art scene create an app in their spare time with no corporate meddling, put it up for free, avoid all advertisement or influence, and perhaps manage to map the causeways of cool and foresee the hot art stars of the future better than those who do such cartography and tea leaf reading professionally—look, why question it? No one I talked to would talk shit on it. People really just like See Saw.

But when she put the app in the crowded digital marketplace that is the App Store, things were slow at first.

“I was just telling my friends about it,” she said. “Come March, I started going around in Chelsea and sitting in front of the CVS on 10th Avenue handing out postcards to every stranger who would talk to me.”

Suddenly, things started to pick up—she says that there are currently “thousands” of users, without elaborating—and dealers started hitting her up to make sure they could have their shows listed.

“The smaller galleries in Brooklyn can get really excited about it,” she said. “I think galleries in Chelsea just expect to be on it, but there was this small gallery in Brooklyn that I added, and I happened to be in the neighborhood for the opening, and I went in and they were like, ‘We love you! Can I give you a hug!’ I felt like Taylor Swift.”

And while she wants to be as inclusive as possible, Ms. Swieskowski is certainly not opposed to excluding artists or galleries that would poison the well.

“It’s definitely more about quality control,” she said. “Like for instance, if you go to New York and, and you have this idea of galleries centered in SoHo, you go to SoHo and you go to West Broadway, and you see these horrible galleries—they’re just storefronts. I don’t want people going to those galleries.”

She would rather see that real estate on See Saw go to shows that won’t always score a shout out in The New Yorker’s Goings On About Town app.

“If a young artist or young gallerist emails me and says, ‘Hey can you put my show on this app?’ I pretty much always do it,” she said.

Museums aren’t invited to the party, though.

“It’s a very, very specific problem that we’re solving,” she said. “It’s not just an art world problem—it’s specifically galleries. People ask why we don’t have museums on the app, but it’s not the same thing—this is, how do I see a ton of different shows in a close radius in a small amount of time?”

Plus, museums don’t change addresses all that often. Parts of town lousy with galleries experience a constant shifting as they try to accommodate a restless burgeoning scene. Chinatown galleries, in particular, seem to constantly be moving—a response to mobbed-up landlords and cramped quarters, perhaps. Galleries change their names frequently, dealers break off to set up shop on their own (creating offshoots of larger galleries) or move just a few blocks away but still keep their geographically referential names. It’s not easy for even the most dedicated gallery hopper to keep all this stuff straight.

“It’s like how you mentioned in that piece,” Ms. Swieskowski said. “You went to 47 Canal, but your friends were at 47 Canal the address, not 47 Canal the gallery. And, like, Essex Street is actually on Eldridge Street. It’s kind of cruel.”

“They can keep their jokes, but I want people to not have the joke played on them,” she replied.

There are no current plans to seek seed money or sell ads or engage in any sort of partnerships, but the user base is increasing quickly. And while Ms. Swieskowski isn’t leaving her day job anytime soon, she is fiercely dedicated to making sure the app is spotlighting the right stuff, gallery crawling nearly every night, and hanging with the the clued-in scene kids at after-parties and such (we’ve run into her a few times since chatting on the phone, often at art world watering holes like Beverley’s.)

And soon, with the explosion of galleries in various clusters of Los Angeles, a West Coast expansion will have to happen.

“We want to get to L.A. pretty quickly, and there’s nothing stopping us,” she said. “In terms of how many galleries we’d have to enter, L.A. is just another Brooklyn.” 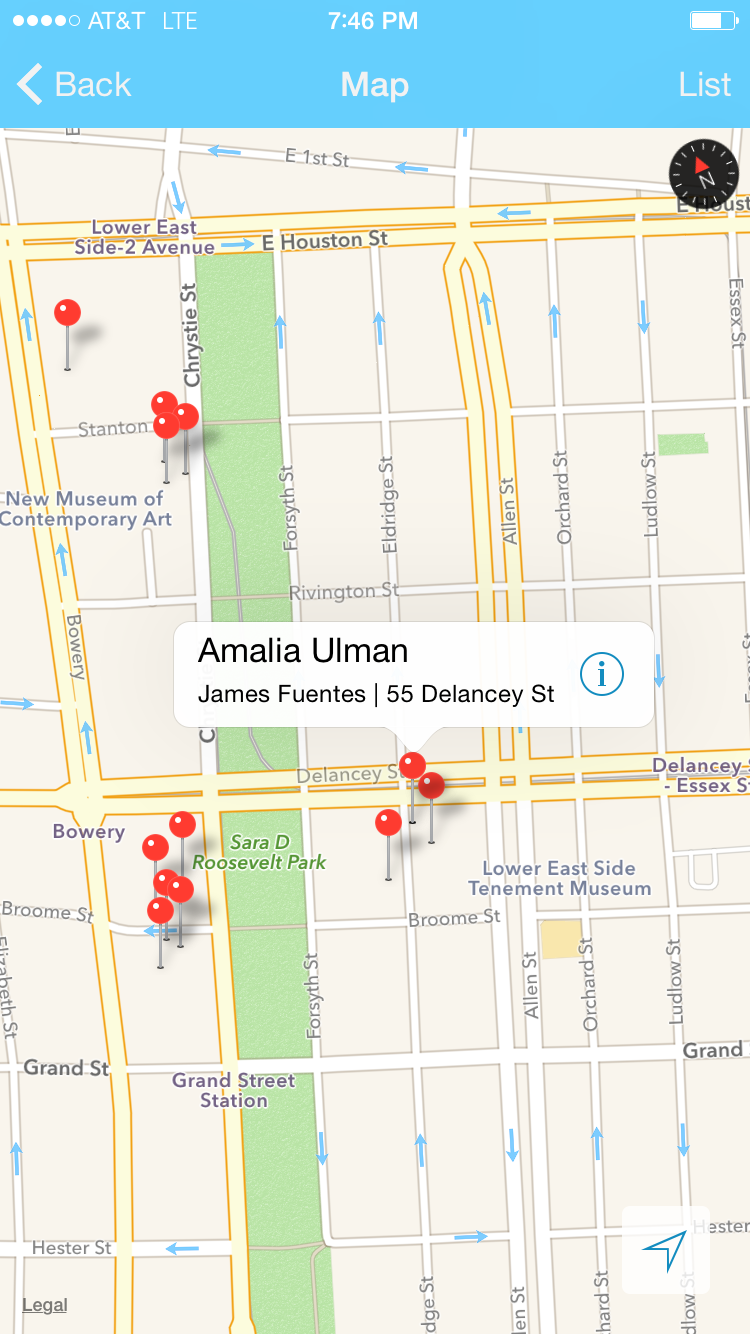