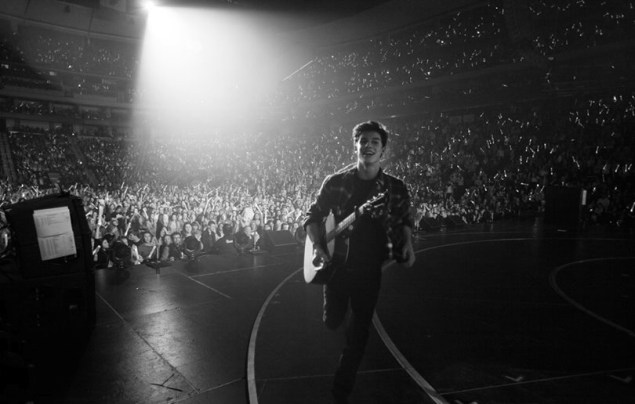 On a recent Friday afternoon, 16-year-old pop singer Shawn Mendes posted a selife on his Twitter account with the one-word caption, “Warm.” Within a few hours, that single tweet netted nearly 40,000 favorites and 15,000 retweets; a testament to both the power of social media and Mendes’ rabid fanbase. “Realistically, I’m only tweeting things I would say even if I didn’t have all of the attention,” explained Mendes during a rare moment of peace. “Of course you have to watch what you say and don’t want to say things the wrong way, but I’m tweeting little stupid things that any 16-year-old guy would tweet.”

It’s the power of social media that gave Mendes his career and notoriety in the first place. Up until last summer, he truly was your average boy, “playing soccer, video games and guitar,” while growing up in Pickering, Ontario, Canada, a suburb of Toronto. Then he downloaded the video sharing app Vine and suddenly everything changed. “I posted this six-second video of me covering the Justin Bieber song “As Long As You Love Me,” Mendes remembers. “When I woke up the next morning, the video had about 10,000 likes and Re-Vines. The fact that so many people responded to it freaked me out. I didn’t know I wanted that much attention, so I actually deleted it from my phone right after.” Mendes wound up redownloading the application and began giving his growing fanbase snippets of more songs. “After a couple of weeks, I had over 100,000 followers and I was like, this is something real,” he says upon realizing the gravity of what was happening to him. “It was the craziest thing to ever happen to me, and wasn’t just fun and games anymore.”

Now, thanks to the influence of Vine (and later Twitter, Facebook, and Instagram), Mendes is attempting to translate his social media success into a viable career as a pop star, much in the same way another handsome teenage boy did the same thing just five short years ago. “I think Justin Bieber is one of the most talented kids in the world,” says Mendes, who is no doubt being groomed as the apparent heir to Bieber’s young throne. “Every comparison made between me and him is really awesome,” he says, including the fact that both were plucked from obscurity via social media just outside Toronto and thrust into the American spotlight. Now, as Bieber is growing up along with his fans, the industry is looking for the next great teen hope, and cash cow, to win the hearts of adolescent girls everywhere. Could Mendes be the guy? “When you have an opportunity like I had, it would have been absolutely crazy to not take advantage and at least try to make something of it,” Mendes notes. “The people who I work with are working very hard to make this something special.”

The “people” that Mendes is referring to are the powers that be at Island Records, the same outfit that recently lifted Nick Jonas into the pop stratosphere. Mendes officially signed with Island this time last year, and his team has been playing the delicate game of turning the 16-year-old with a massive online following into a viable star ever since, no easy feat considering that for every teenager with a massive online following, few get taken seriously as artists outside of the confines of the Internet. Fortunately, Mendes’ first two singles, the empowerment anthems “Life of the Party” and “Something Big” have shown promise on the charts and have even landed on Top 40 radio. “When I wrote ‘Something Big,’ I was on a tour bus, performing across the country, and was so high on life and on top of the world that I felt like I had to write a song that expressed that,” he says. “I wanted people to hear this song and think, ‘Yes, I can do this.’ ”

It’s easy to see why Mendes would feel like he’s on top of the world, especially considering he’s looking at superstardom through the eyes of someone decidedly not of that world. “Not in a million years did I think this would happen to me,” he explains. “I had fantasies of being in the studio all the time, and now I am. It’s a dream come true. I think people underestimate how powerful social media is.” With that, Mendes and his team will continue to work on solidifying those Bieber comparisons, hopefully by mirroring his success and not his later troubles. In the meantime, Mendes sends out another simple tweet, perhaps prophetic: “Think I’m writing a hit !” It garners 13,000 favorites in less than a half hour. 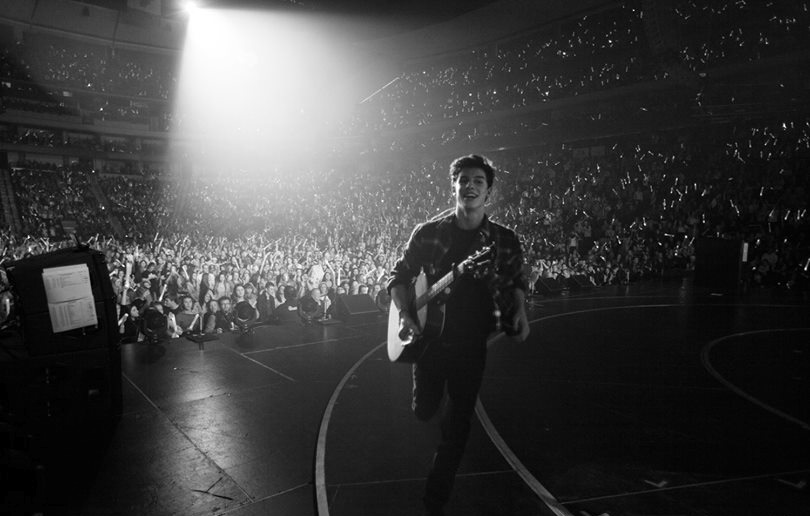