Food delivery apps like Seamless and GrubHub are staples for the average New Yorker.

But when the city’s being pummeled by a blizzard of potentially-apocalyptic proportions, we have to ask ourselves: Is it ethically sound to ask a delivery guy to slog through the mounting snow drifts, all so you can eat pad thai in your Snuggie?

Yes, it’s okay to order food during the impending blizzard, GrubHub Inc. spokesperson Allie Mack told the Observer. Uncontrollable snow is, after all, a money-maker; the company sees a “general influx” of orders during winter weather.

GrubHub Inc.—the company formed when Seamless and GrubHub merged in 2013—stays in close contact with its participating restaurants during inclement weather, Ms. Mack said, and can communicate with diners should a restaurant unexpectedly decide to stop deliveries, or to close altogether. Otherwise, they’re open for business.

You should, however, be prepared to tip your delivery guy more than usual; these guys are braving treacherous conditions—sometimes literally biking through three feet of snow, or in temperatures well-below freezing.

“I would think that anything at least above 20 percent would be nice,” Ms. Mack said.

In the past, Seamless and GrubHub users in New York haven’t had the best track record when it comes to tipping in winter weather. During last year’s infamous Polar Vortex, Ms. Mack said, diners in Detroit, Minneapolis and Chicago tipped 15 percent higher than average. In New York, diners tipped their delivery people a measly five percent higher than normal. Let’s get it together, people.

“[Delivery people] really are heroes,” Ms. Mack pointed out, “delivering you food so you can stay warm and cozy in your pajamas.”

We checked in with Diane Gottsman, a national etiquette expert and owner of The Protocol School of Texas, to see what she recommends when it comes to ordering food during record-breaking blizzards.

“They’re also missing out [on other tips] because it’s taking them far longer,” she noted.

Ms. Gottsman also offered up other etiquette tips. “[The delivery people] are cold, so just be extra courteous,” she said, suggesting you offer them a to-go cup of hot coffee or tea. They might say no, as they’re on their on their bikes, but they’ll likely be grateful that you offered.

For any New Yorkers actually on speaking terms with their neighbors, Ms. Gottsman also recommends teaming up with neighbors and submitting one large, joint order.

“In the blizzard,” she said, “we all need to come together and be good to each other.”

“A delivery bike is not an emergency vehicle. No,” he said. “If you are part of the city government, if you are a first responder, if you are an essential public servant, those are the kind of people allowed on the streets.”

“Nothing that has to do with leisure, or convenience, or takeout food, or going to movies,” he continued. “We’re not doing that.”

“As Winter Storm Juno sets in, GrubHub is in constant communication with our restaurant partners to stay up-to-date on closures and ensure drivers are being safe when delivering meals. We advise our restaurant partners in the Northeast to adhere to all local safety guidelines and exercise extreme caution when delivering orders. We also want to remind diners to be appreciative of, and patient with, their delivery drivers. These food heroes are braving heavy snow, wind and frigid temperatures to ensure diners can still enjoy their local favorites from the comfort of their warm homes. With this in mind, we hope diners will be patient if their orders take longer than normal to arrive, and generous and appreciative when tipping their drivers.” 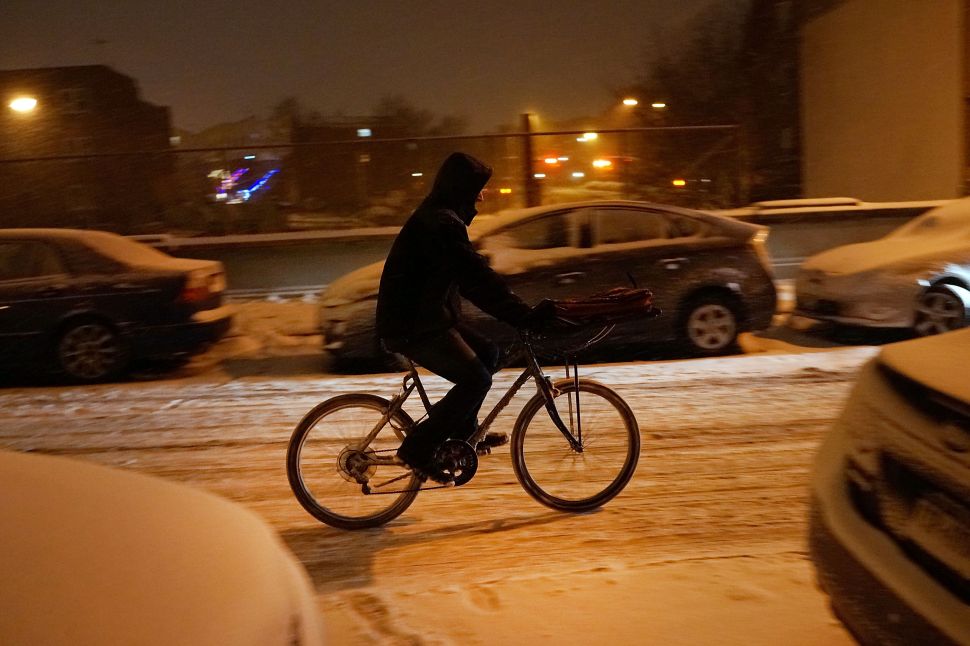