The 2016 Republican nominating season is beginning to move to the next level as events like last weekend’s Iowa Freedom Summit give candidates more opportunities to interact with primary voters in early states. Although Jeb Bush’s announcement late last year that he will explore a candidacy has shaken up the race, the Republicans can hardly be described as closing ranks around the former Florida governor. It remains likely that the Republican primary field will be large, and by most measures, strong, leading to a genuinely competitive primary.

Governor Scott Walker of Wisconsin is the kind of candidate who can easily be overlooked among more well-known politicians like Mr. Bush or Mitt Romney, or more outspoken candidates such as Senators Rand Paul of Kentucky and Ted Cruz of Texas. Governor Walker, however, should not be ignored so quickly. This nomination, like all presidential nominations, will be won by a candidate who succeeds in three key areas: being ideologically close enough to the primary electorate, positioning him or herself well relative to the other candidates and the other party, and building a successful campaign organization. Mr. Walker is one of the few Republican candidates who may be able to do all three of these things.

Perhaps because he is the governor of a blue-ish state that is not dominated by Republicans, Governor Walker is not seen as a right wing firebrand, who appeals on a visceral level to the party’s extreme and social conservative base like Senator Cruz, while alienating everybody else. Nonetheless, Mr. Walker has very solid conservative credentials. Governor Walker may be too smart to place issues like marriage equality or abortion rights at the center of his campaign, but as governor, he has been opposed to both these things and has sought to legislate accordingly. This will allow him to compete for votes from the Republican Party’s socially conservative base.

On economic issues, Mr. Walker has created a high profile for himself as one of America’s leading opponent of labor unions. He made a name for himself in 2011 by successfully stripping public employee unions in Wisconsin of some of their bargaining rights. By battling public employee unions in such a confrontational manner, Mr. Walker demonstrated, at least to most Republicans, that he was tough and put himself in a good position to win what might be called the Koch brothers primary. While other conservative Republicans can make claims about what they would do as President, Mr. Walker can already point to signing one significant piece of legislation. Moreover, because he defeated a labor led effort to recall him in 2012, and won reelection easily in 2014, Mr. Walker can also claim that he has defeated the Democrats’ vaunted labor machine.

Significantly, while Mr. Walker’s anti-union machinations has helped him with his party’s base, it may not hurt him in a general election very much, leaving room for him to portray himself as a relative moderate. This is largely because not many people who are neither union members themselves or ideologically left on economic issues care very much about labor unions anymore. Being aggressively anti-labor is much less likely to move swing voters in 2016 than, for example, being opposed to environmental legislation or being vehemently anti-marriage equality.

This is a big boon to Mr. Walker’s ability to position himself as an electable candidate without compromising his conservative bona fides. It also helps that Mr. Walker is from Wisconsin, a swing state, rather than from the deep south or a small Republican state. The fact of having won two statewide elections in Wisconsin, a state that has voted for every Democratic presidential candidate since Michael Dukakis, gives Mr. Walker a good argument that he is electable.

Currently, the two other candidates who are most actively seeking to portray themselves as electable and even moderate, compared to most of the field are Mr. Bush and Mr. Romney. Mr. Walker has an advantage over these two party heavyweights because he presents a better Republican matchup against presumptive Democratic nominee Hillary Clinton. Ms. Clinton is, in the context of her party, also a moderate, with a great deal of experience and a strong demographic appeal to key swing voters, like white women. But she is not the most gifted retail politician and can be portrayed, by a deft Republican opponent, as both a figure from the past and part of an unappealing trend of dynastic politics in the U.S. Neither Mr. Bush nor Mr. Romney (whose father ran for president in 1968), however can plausibly attack Ms. Clinton on either of those grounds.

Mr. Walker is different. At 47, he is much younger than either Ms. Clinton, Mr. Romney or Mr. Bush, and therefore would be better able to highlight the generational difference between the two candidates and position himself as more future-oriented. Additionally, unlike other Republican candidates who are members of his generation like Senators Rubio or Cruz, Governor Walker is not as easily caricatured as an extremist.

Strong positioning and ideological bona fides are helpful to a presidential candidate, but without an experienced, well-funded campaign organization, that candidate will remain at a disadvantage while other better organized and funded candidates surpass him. Mr. Walker will certainly face some challenges in this regard. He does not yet enjoy national name recognition and will have a difficult time keeping up with the fundraising networks of better known candidates. However, Mr. Walker appears to be assiduously building a formidable campaign team; and Republican insiders, of the sort who can be very helpful in primaries, are paying attention.

David Polyansky may not be a household name, even among political insiders, but if you were looking at doing well in the 2016 Iowa caucus, Mr. Polyansky is one of the people you would want by your side. Mr. Polyansky is not only fresh from serving as senior campaign consultant to newly-elected Iowa Senator, and possible rising Republican star, Jodi Ernst, but he also was a senior advisor to Mike Huckabee when he won a surprise victory in the 2008 Iowa caucus.

Mr. Polyansky is now working for Governor Walker. This is evidence both that Mr. Walker is working to build his organization, and that people who represent important organizational components see the Wisconsinite as a viable candidate. As governor of a neighboring state, Mr. Walker will already be in a good position in that all important first caucus. This strategy seems to be already paying dividends as Mr. Walker recently wowed an audience of important Iowa Republicans at the first forum for candidates in that state of 2015.

The Iowa caucus is not tantamount to the Republican nomination; and its importance can be overstated. Previous winners of the Iowa Republican caucus include MikeHuckabee in 2008 and Rick Santorum in 2012. Neither of them went on to win the Republican nomination, but other winners in Iowa, such as George W. Bush in 2000 and Mr. Dole in 1996, went on to represent to represent their party in the general election. Nonetheless, in a crowded field, doing well in Iowa will be critical. Mr. Walker’s appeal is not limited to Iowa, but it is clear he is putting a lot of emphasis on that first caucus state.

Despite his obvious strengths, Mr. Walker will face major obstacles in his quest for the nomination. He will be running against better fundraisers. Mr. Walker may not appeal beyond what could be his midwestern base, and has not really been yet tested on the national political stage, even if he gets the nomination, 2016 may yet shape up to be a difficult one for the Republicans. All candidates, however, face obstacles of some kind, but Scott Walker also is the unusual candidate who has a compelling ideological story, seeming electability, and an interest in building a campaign organization. That is what is needed to compete for the White House. 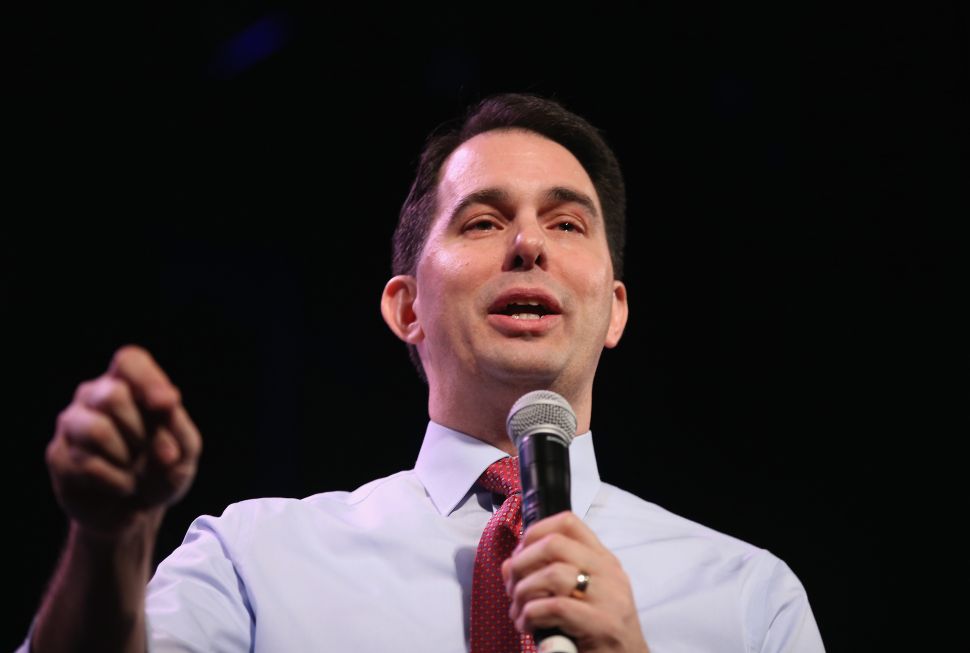