When the founding fathers limited the reach of government, they left in place a range of inherent powers. It can compel citizens to risk their lives in the country’s defense. It can tax income at whatever level it chooses (the top federal tax rate during World War II was 91 percent). It can tell businesses where they can and can’t operate through zoning.

And, if our civic leaders are bold enough to use the law creatively, our local government has the power to answer one of New York City’s most pressing needs: saving the Knicks.

The once-celebrated NBA franchise has long been mired in failure; not the kind of endearing failure exemplified by the early Mets, but a failure that encompasses both on-court performance and off-the-court horrors quite apart from this year’s likely-worst-Knicks’-season-ever performance. Since 2001, they have lost more regular season games than every team except for the Minnesota Timberwolves. They’ve made the playoffs four times under a system that allows more than half the league’s teams into the post-season, yet have won exactly one series. The missteps off the court range from a huge sexual harassment settlement, the loss of executive and coaching talent (Dave Checketts, Pat Riley, Jeff Van Gundy, Donnie Walsh), and a media relations policy apparently inspired by North Korea.

During this stretch of revolving-door players, coaches, and GMs, one constant has remained: James L. Dolan. The executive chairman of Madison Square Garden attained his lofty position by living the American Dream: He is the scion of a self-made man, and is a living, walking argument for a confiscatory pre-mortem inheritance tax.

If Mr. Dolan chose to spend his time indulging his fantasy that he is a talented performer (he is a front man for the rock group JD & the Straight Shot) he would be of no concern to anyone other than fans of the Eagles, for whom his band is the opening act.

As Knicks’ owner, however, his stewardship is a matter of serious public concern—so serious that it is long past time for the local government to use its power to take the team away from him.

Does this sound like a Marxist fantasy? In fact, the capacity to take the Knicks away from Mr. Dolan rests in a power long employed by governments, Left, Right and center: “eminent domain.” States and localities hold that power by common law, and through the Fourteenth Amendment. And that power is significant. Think a government can only take a blighted neighborhood or an abandoned building? Under a controversial 5-4 Supreme Court decision in 2005, New London, Conn. was allowed to seize a “non-blighted” neighborhood and hand it over to a private developer; the anticipated extra tax revenues were all the justification the city needed.

But wait—is the New York Knick franchise “property” in the sense that land or a building like Madison Square Garden is? Yes. As long ago as 1848, the U.S. Supreme Court held that “intangible property” (like the franchise to collect tolls on a bridge) is just as much “property” as is a piece of land. And, if one state supreme court is right, a sports franchise is, too. When the Oakland Raiders moved to Los Angeles in 1980, the City of Oakland tried to use its “eminent domain” power to take the franchise. In 1982, the California high court said that there was no inherent legal obstacle to the taking of a sports franchise. (A lower court ruled against the city on other grounds, and in 1995, the team moved back to Oakland.)

There is serious debate about how far eminent domain should extend. In the case of the Knicks, however, the case for a taking is blindingly clear.

First, the Knicks have become a “blight” on the city every bit as much as an abandoned building. Consider just one example. Every time a Knick game is broadcast on national TV, millions of viewers watch a team with “NEW YORK” on its jerseys reach new levels of ineptitude. We can only guess at the number of potential tourists who say, “If that’s what New York stands for, I’ll go to Muncie,” or the number of entrepreneurs who decide to locate their new ventures elsewhere. The loss in potential revenues is staggering to contemplate.

Second, it is basketball we’re talking about, the sport that the great journalist Pete Axthelm called “the city game,” the sport that needs only a ball, a hoop and a patch of asphalt. The blight that Dolan’s ownership has cast upon one of New York’s defining symbols is like a string of fast-food franchises defacing Sheep Meadow.

Finally, it is that very passion that New Yorkers bring to the game that draws helpless hordes into the Garden night after night to watch the nightmare that the Knicks have become. The 5-35 team still claims to sell out every game at prices that constiture legal larceny (though several thousand tickets are available for almost every home game on SutbHub at sharply reduced prices). For countless New Yorkers, basketball is their addiction, and Mr. Dolan has been peddling tainted product for far too long.

So the case for a legal “taking” of the Knicks is overwhelming. What about the practicalities? The law is clear that Mr. Dolan, like any owner, is entitled to “just compensation.” So how much is the team—not the Garden, just the team—worth? Last January, Forbes magazine estimated the value at $1.4 billion, but this is too low, given that the Los Angeles Clippers fetched some $2 billion last year when Donald Sterling was forced to sell. Financial analysts have put the Knicks’ value at between $2.5 billion and $3 billion.

Can the city afford such a price? Yes, through floating stock, creating a publicly-owned, non-profit modeled after the Green Bay Packers. (No one is allowed to own more than 200 shares; and the 120,000 stockholders help to make the Packers a franchise of enduring power and stability). Apart from the sentimental value of owning stock, the Knicks’ operating revenue would make it attractive. In 2013—when the team somehow made it to the second round of the playoffs—the profit hit $96 million. This year, the execrable performance is likely to shave that number considerably, but its profitability is assured—and the mere promise of a team free from the Dolan curse will likely do wonders for revenue.

Second, do we really want the city to run the Knicks? Of course not. Many City Council members I would not trust to operate a TV remote. What would be needed is a semi-independent entity, something like the Municipal Assistance Corporation that saved the city from bankruptcy in the 1970s.

This would put the Knicks under the direction of people whose passion for the game would give the team a chance for a rebirth—starting with current president Phil Jackson. Maybe Checketts or ex-Knicks like Dick Barnett, who taught sport management at St. John’s University, or former Senator Bill Bradley, could be recruited. There might even be a place of honor for long-suffering fans, such as a certain film director.

Far-fetched, you say? Hardly. What I have proposed is an example of the law at its best: creative, innovative, able to apply old doctrines to new challenges. It is an initiative that would unite this divided city as nothing has since the Mets’ drive to the World Series in 1969.

And as an ultimate gesture of good will, we might even let James Dolan and his band perform the National Anthem. 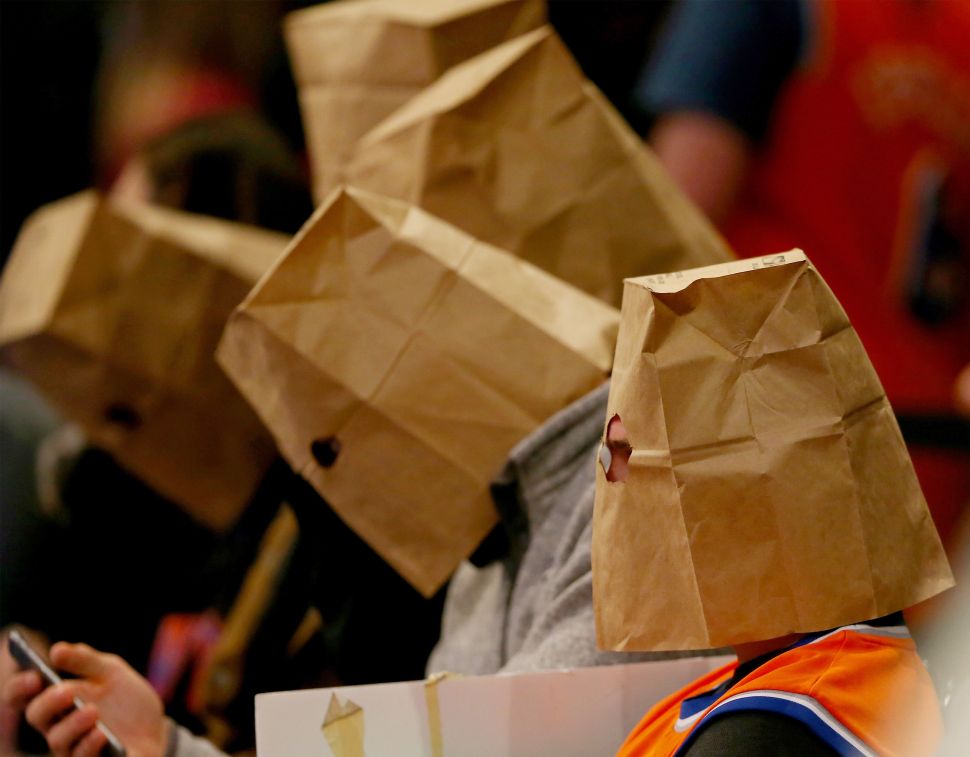