Joe Lhota wouldn’t call Assembly Speaker Sheldon Silver a “man of integrity,” but he did offer up a description of Mayor Bill de Blasio: “hypocrite.”

Mr. Lhota, the Republican candidate who lost to Mr. de Blasio in 2013, slammed the mayor today for supporting Mr. Silver—who was arrested on charges of mail fraud, wire fraud and extortion—despite previously calling for the resignations of pols like former Gov. David Paterson for what Mr. Lhota deemed lesser indiscretions.

“I think the mayor’s being a hypocrite. He called upon Gov. Paterson to step down over a baseball ticket scandal and interference in an aide’s domestic violence case,” Mr. Lhota told the Observer. “How could he possibly think that what Gov. Paterson did was worse than millions of dollars of bribes?”

U.S. Attorney Preet Bharara charged that Mr. Silver improperly used his office to secure bribes and kickbacks that he misrepresented as payments for work done at two law firms. Mr. Silver has said he will be “vindicated” in court.

Mr. de Blasio said firmly today that Mr. Silver, despite his arrest, was a “man of integrity” and should not resign.

“No, I think he has due process rights, and he should let the—we should all let the judicial process play out. I think that’s something that’s important in a democratic society,” Mr. de Blasio said.

But in 2010, Mr. de Blasio reportedly called for Mr. Paterson to step down, based on not criminal charges but news reports. A New York Times article revealed alleged interference by Mr. Paterson, a Democrat like the mayor, in a domestic violence case against one of his top aides—with the paper reporting Mr. Paterson had called the victim the night before she failed to appear in court. Later that year Mr. Paterson was fined for improperly accepting tickets to a Yankees game. He eventually decided not to run for a full term in office, but unlike Mr. Silver, Mr. Paterson was not charged with a crime.

Still, while serving as public advocate, Mr. de Blasio called for Mr. Paterson’s resignation, leading black leaders to vent their frustration with his position in a closed-door meeting, according to the Associated Press and New York Post. And according to the Daily News, after then-City Councilman Charles Barron ripped Mr. de Blasio for criticizing Mr. Paterson, de Blasio “fired back that if Paterson doesn’t immediately address allegations that state officials interfered in a domestic violence case against a top Paterson aide, he must go.”

The mayor has also said Republican Congressman Michael Grimm should have stepped down even before he pleaded guilty to a felony tax evasion charge in December—and today said the difference was Mr. Grimm’s “pattern of questionable practices over a long period of time.”

Mr. de Blasio’s office did not respond to requests for comment. 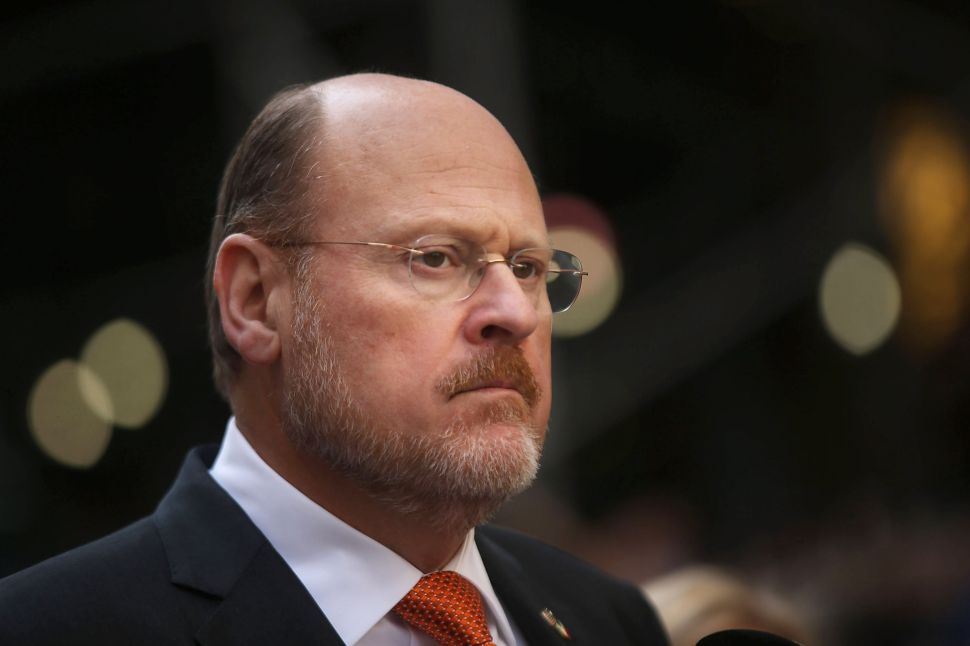