The race card gets played again, about a white grandfather (Kevin Costner, in a challenging role) and a black grandmother (Octavia Spencer, compelling as always) fighting for custody of an interracial grandchild, with heavy but touching blows for both sides of the equation. Good acting and plenty to think about, but a better director than Mike Binder would have made a better film.

Still grieving from the loss of their daughter, despite her involvement with the irresponsible black drug addict he blames for her death during childbirth, New Orleans attorney Elliot Anderson (Mr. Costner) and his wife have been raising their biracial grandchild Eloise together, with every privilege. Emotionally broadsided when his wife dies suddenly in a car crash, he decides nevertheless to raise the child alone, when Eloise’s African-American grandmother, Rowena Jeffers (Oscar-winning Ms. Spencer), launches an unexpected legal battle for her side of the family to seize control of the girl’s welfare. Both grandparents have equal rights under the law, but Anderson’s rich, over-educated white lawyers have more power—and don’t mind playing dirty to prove it. In the bitter war that ensues, the emotionally charged family members on both sides of the racial divide are forced to take a hard look in the mirror and rethink their own feelings, fears, anxieties and attitudes about prejudice in modern America.

Finding solace in a bottle of Scotch, Mr. Costner is forced to deal with volatile realities while playing most of his scenes drunk, allowing the dynamic Ms. Spencer to steal a lot of footage. She’s the same tough, ass-kicking icon she was in The Help, with a better wardrobe. The movie overstacks the deck by lavishing the alcoholic white lawyer with luxury while placing the decent, respectable black matriarch’s home across the street from a crack den. But most of the time the characters manage to dodge clichés and Mike Binder’s screenplay admirably gives both families credibility and ballast, while a lot of weight rests unfairly on the shoulders of the actors to overcome his lackluster direction.

Although it has an uneven feel and a retro look, Black or White successfully peels away the politically correct layers of false civility beneath a still-raw taboo subject in American life and gives a volatile subject contemporary relevance. 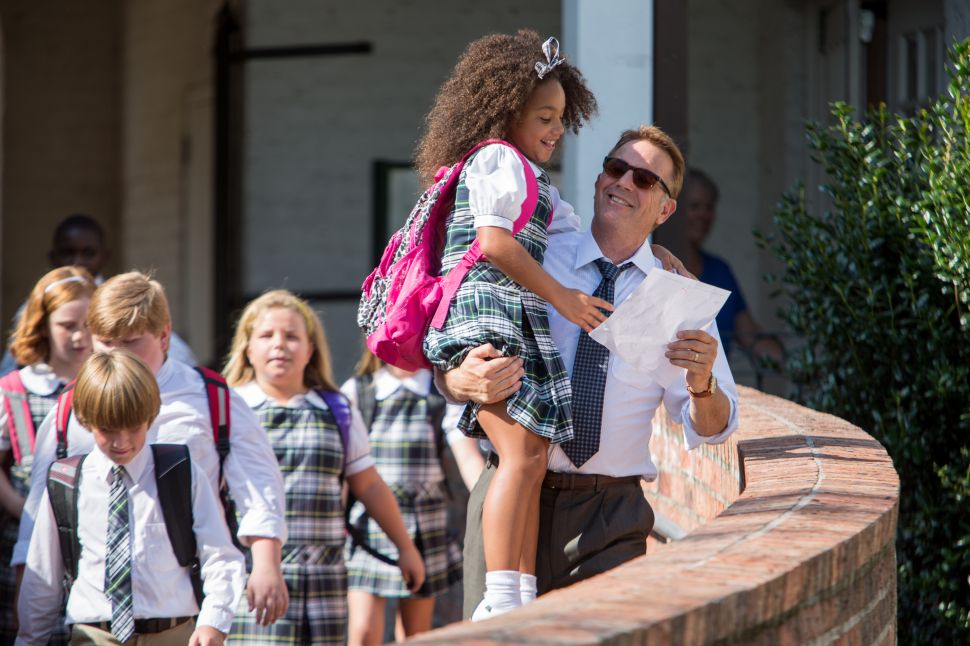