Robert Crumb is considered by many to be the single best cartoonist America has ever produced. The creator of counter culture icons like Fritz the Cat, the Keep On Truckin guy and Mr Natural, Mr. Crumb was inducted into the comic book Hall of Fame in 1991, the same year he moved his family to France, where he has resided ever since. Writer Celia Farber reached him at his home on Friday, January 9, 2015, to talk about the massacre of cartoonists and others in Paris this week.

Celia Farber: Have journalists been calling you today to talk about the assassinations at Charlie Hebdo? Are you willing to talk about it?

No other journalists have called you? Really?

We don’t have a context for this tradition here, merciless, political satire. One thing I keep noticing is commentators here are pointing out that the cartoons were very offensive and insulting. It’s as if we don’t understand that was by design. Very intentionally offensive, and very clear about why that couldn’t be compromised. That’s the part we don’t get, as Americans. It’s like, “Why did they have to be so mean?”

It’s a French thing, yeah, and they value that very highly here, which is why there’s like a huge amount of sympathy for the killing of those guys, you know, huge demonstrations and crowds in Paris – people holding up signs that say, “Je suis Charlie.” Even here in the village where I live, we had a demonstration yesterday out in front of the town hall. About 30 people showed up and held up “Je suis Charlie” signs.

Yeah, I went to it, sure. Since I’m the village cartoonist, I had to go. [Laughs.]

You didn’t know any of those guys?

I think they were well aware they could and very likely would get killed.

The editor knew. He knew. The office got fire bombed in 2011. The government started, like, you know, offering them protection, and when he said that thing about, you know, “I’d rather die standing than live on my knees,” he said, “You know, I’m not married, I don’t have credit cards, I don’t drive a car. I stay very …I keep everything very simple…I don’t want to have these connections, because I could go at any time.” He knew that.

These guys were not trying not to offend, and that’s what an American media-conditioned mind cannot understand. The idea that yes, you offend those who abuse power.

It’s not the faith that is being insulted. It’s the extremism, the psychosis. The totalitarian impulse.

Aline [Mr. Crumb’s wife is the cartoonist Aline Kominsky-Crumb] saw something on the internet…All the big newspapers and magazines in America had all agreed, mutually agreed, not to print those offensive cartoons that were in that Charlie Hebdo magazine. They all agreed that they were not going to print those, because they were too insulting to the Prophet. Charlie Hebdo, it didn’t have a big circulation. A lot of French people said, “Yes, it was tasteless, but I defend their right to freedom of speech.” Yeah, it was tasteless, that’s what they say. And perhaps it was. I’m not going to make a career out of baiting some fucking religious fanatics, you know, by insulting their prophet. I wouldn’t do that. That seems crazy. But then, after they got killed, I just had to draw that cartoon, you know, showing the Prophet.  The cartoon I drew shows me, myself, holding up a cartoon that I’ve just drawn. A crude drawing of an ass that’s labeled “The Hairy Ass of Muhammed.”  [Laughs.]

Yeah, I sent that to Liberation, so we’ll see what happens. You know, that’s the most I’ve stuck my neck out for a long time…

Did you discuss that with Aline?

I showed it to her, and she said, “Oh, my God, we’re going to have to go into hiding.” [Laughs.] So, then Aline had this idea for another cartoon, which we also sent to Liberation, a collaboration, that’s showing her looking at the drawing saying, “Oh, my God, they’re going to come after us! This is terrible…I want to live to see my grandchildren!” And then she has me saying, “Well, it’s not that bad. And, besides, they’ve killed enough cartoonists, maybe they’ve gotten it out of their system.”

So you submitted both?

Yeah. We sent it to them this morning. Scanned it, and emailed it. It’s going to run in Liberation tomorrow.

Charlie Hebdo, they print so many insulting cartoons about Muslim extremists, you know, geez, they just kept at it, you know…but that wasn’t the only people they insulted, they insulted everybody. The Pope, the President of the country, everybody! They were merciless, to everybody. It was a really funny magazine. They just didn’t hold back towards anybody. You know, they didn’t let anybody off the hook, which was good.

What was your reaction inside when you first heard about it?

I had the same reaction I had when 9/11 happened.  I thought, “Jesus Christ, things are really going to turn ugly now.” That kind of thing, just like 9/11, it gives the government the excuse to crack down, to become very much more, like, you know, “Homeland Security” oriented.  And the right wing gets like this kind of like fodder for its arguments. The right wing here is very down on the Arabs. And France has an Arab population that’s like, 5 Million, something like that – huge population of Muslims in this country, most of whom just want to mind their own business and don’t want to be bothered. Those kinds of extremists are a very small minority. We have friends here who are from that background, you know, Moroccan or Algerian. And they just don’t want any trouble, and their kids are mostly even more moderate than they are.

There was a quote yesterday in the New York Observer from a writer who once worked for Charlie Hebdo. He said, “Mad Magazine is to Charlie Hebdo as Taylor Swift is to R. Crumb.”

I’ll send it to you.  Is there anything in the US in our history that comes anywhere near this tradition – the Hebdo tradition? If so, what would it be?

Underground comics, back in the 70s.  But today, I don’t think there’s anything like that now in the US. The thing about Charlie Hebdo is that it started in 1969. The gang of guys that worked for that magazine, they just kept at that for decades. Those guys are fairly old, you know, older guys most of them. There wasn’t a whole lot of, you know, 20- somethings or 30-somethings in that group. The cartoonists are mostly older guys. There is lots of critique of the left also. They say the left is hypocritical, bullshitters and opportunists, and all that. But generally I would say there’s a leftish sympathy in Charlie Hebdo. But they just came out with that every week. Every week. And people would just look at it and laugh, “Oh, you know those guys, those crazy guys.  They’re outrageous.”

They had offices and staff – they seemed to have reasonable funding…

Yeah, I just read this recently that they were actually being subsidized, especially after that 2011 bombing, they got subsidized by some bigger publication. Some mainstream successful thing. It was like an old institution on the radical end of things, you know. Yeah, it doesn’t exist in the US, there’s nothing like that. It just went on for so long, you know. And it’s gonna still go on, they’re going to keep it going

So why wouldn’t you just not do it? Why would you go ahead and submit a cartoon like that? Isn’t that really scary and risky?

Well–they asked me to. Liberation called me and said, “Crumb, can you do a cartoon for us? About what you think about this, you know, you are a major cartoonist, and you live in France.” So I thought about it. I spent a lot of time thinking about it. I’m doing the dishes, or whatever,  I was thinking, “What should I do for that cartoon…” I had a lot of ideas.  Other people come up with these, you know, clever cartoons that comment on it, like…This one guy did a cartoon showing a bloody dead body laying there, and a radical Muslim standing over him with a Kalashnikov, saying, “He drew first!” Stuff like that. That’s good, that’s clever, you know, I like that. But, me? I gotta like, you know, when I do something, it has to be more personal. I said, first: “I don’t have the courage to make an insulting cartoon of Muhammed.”

Then I thought, “OK, I’m the Cowardly Cartoonist…As a Cowardly Cartoonist, I can’t make some glib comment like that, you know? I have to, like, make fun of myself.  So instead of drawing the face of Muhammed [laughs], I drew the ass of Muhammed.  [Laughs.] But then I had myself saying, in small lettering, “Actually, this is the ass of my friend of Mohamid Bakshi, who’s a film director in Los Angeles, California.” So if they come at me, I’m gonna say, “No, look, it’s not Muhammed the Prophet, it’s this guy, Mohamid Bakshi.” So, you know.

But there was never a moment when you thought about not doing it?

No. I thought, I gotta do it. They asked me. I gotta do it…Otherwise, everybody’s going to think: “Where’s Crumb? Why doesn’t he come forward? What the hell’s the matter with him?”  Then I would get calls saying, “How come you didn’t do a cartoon about this?” Every other cartoonist in the country has done something about it. What are you, scared? What’s the matter with you? You’re too, like, comfortable in your, you know…your success and your blah blah blah…” So, I thought, I gotta do it. You know? [Laughs.] And I didn’t want to do anything glib or, sorrow for the dead heroes and all that.  Everybody else has got that covered.

Was it a relief when you were done and turned it in?

No, it felt like, “Jesus, what am I doing? Am I crazy?” Aline said, “Oh, my God, we have to go into hiding.” So we’ll see if we get any death threats. I think, maybe, they got it out of their system. They killed four cartoonists. And I didn’t actually draw Muhammed’s face, so…and it’s actually the ass of Mohamid Bakshi, so…[laughs]. 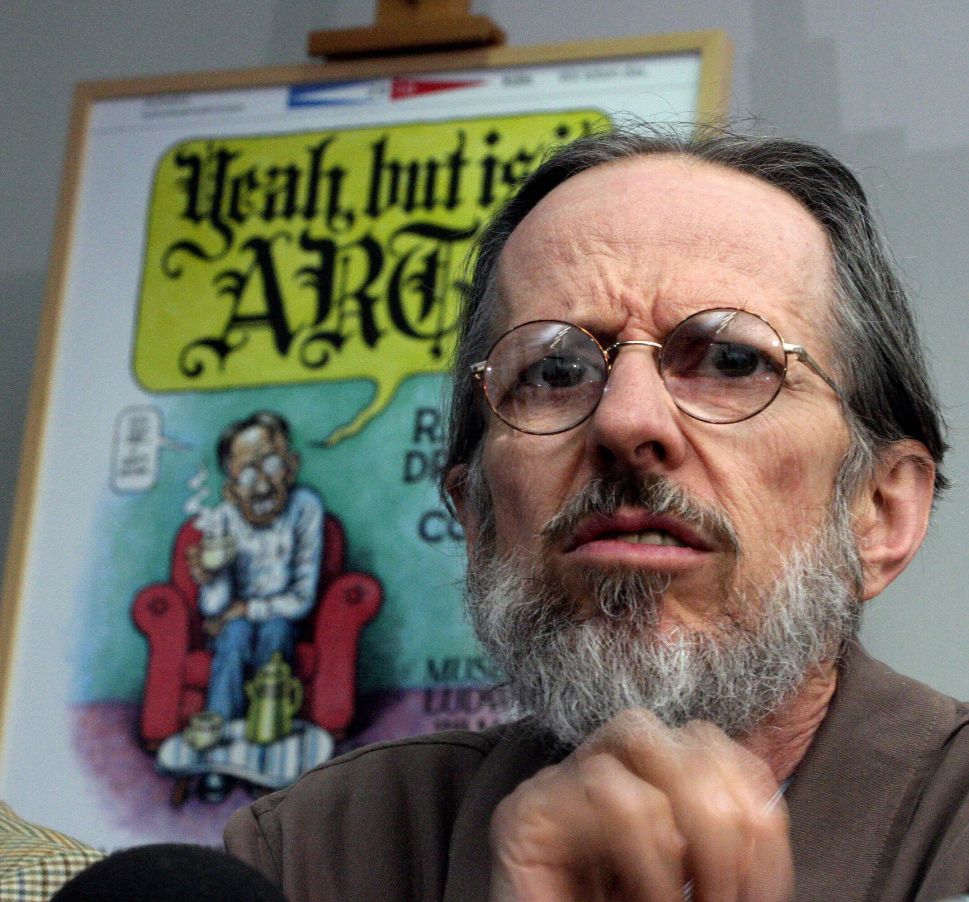