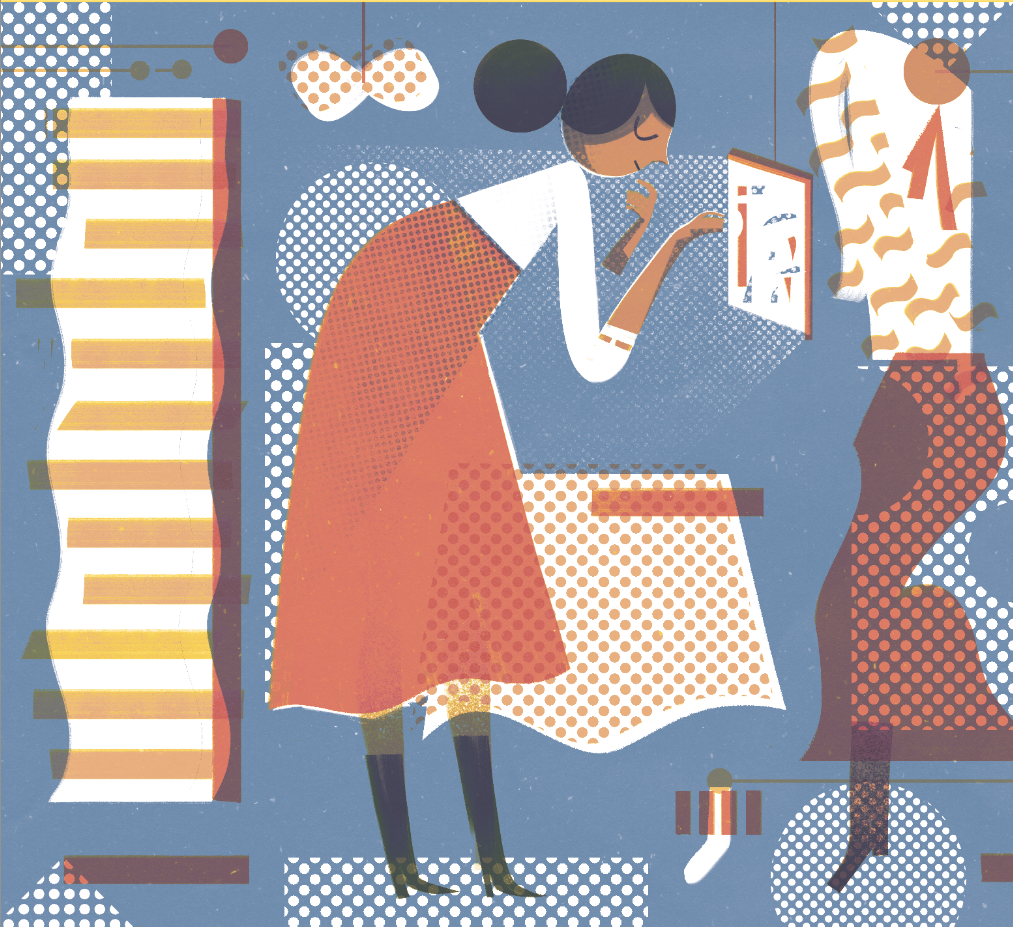 Andy Dunn was at a Ralph Lauren when he asked to use the restroom. It was reserved for employees only, but they made an exception for Mr. Dunn, e-commerce pioneer and CEO of Bonobos, who is leading the way —stores that don’t necessarily sell anything.

What he saw on his brief journey to the bathroom horrified him: racks of suits, boxes, bags, shirts and pants in all sizes.

“Stacks of inventory everywhere,” he told the Observer. “I thought ‘Thank god we’ve discovered a model where we don’t have to do this.’”

Mr. Dunn is talking about Bonobos Guideshops, a dozen retail outlets that don’t carry much inventory—and even what they do carry, they don’t sell.

Budding New York fashion and apparel companies that began online including Birchbox, Warby Parker and Baublebar, are making the anxious leap into bricks and mortar. These startups have since had a come-to-Jesus moment in seeing the value of opening physical retail stores, which allow them to make their products real for people who can’t be woo’d by promises on a website.

The term “bricks and mortar” itself carries a laborious weight—it evokes sweat, stone, veneration, lost arts like masonry, and the industrial age. It implies everything tech founders and investors hate: old business models and clunky, illiquid assets like real estate.

But even as ecommerce titans Amazon and competitors cut away at global retail, bricks and mortar still won’t cede all of its territory. Silicon Valley’s futurist investors may forecast the absolute death of traditional retail shopping, but leading fashion startups that tout themselves as tech companies are finding that physical retail space is exactly what they need to mature. They just have to fix the entire business model first.

The Bonobos Guideshop on Crosby Street looks, for the most part, like a SoHo menswear store. A few overpriced cardigans, various rust-colored chinos, a Napoleonic portrait of Bill Murray hanging on the wall, wooden panelling abound. But none of the items in the store are for sale.

Instead, the shop carries one or two of each item in the Bonobos catalogue, and one of each size. You can get the look and feel without having to guess at fit, quality or color from the webstore photography. Once you’ve decided what you want to buy, the clerk orders it for delivery to your door, right from the Bonobos website. No storeroom full of inventory, no toting around shopping bags and no walking away empty-handed (so to speak) because they didn’t have the size or color you need. No need to feel guilty heading back to work or the gym and having to show your hand to friends and colleagues or fielding nosy questions about your shopping.

Bonobos began as an ecommerce pants company—an online brand selling chinos direct-to-consumer. But for some people, no number of five-star reviews will convince them to buy a pair of pants they haven’t seen on their body and in a mirror. Mr. Dunn’s market research told him that about half of his customers needed to put hands on the product before they made their first purchase, so he set up a couple of fitting rooms in the lobby of the Bonobos offices. When they started doing a million dollars of revenue in run rate out of that lobby, that was a clear green light for opening a store.

The Guideshop model has dexterity and convenience of online shopping—like home delivery of the time—and less of the heavy legacy liabilities of traditional retail. Keeping a stock room full of inventory, for example, is clunky and expensive, as is having to package that inventory, care for it, and pay for the space it occupies. Once it goes out of season, you then have to offload it all in season-end sales to minimize financial losses.

Do away with all of the storage—Guideshops max out at around 1,500 square feet—and all you have left is the action on the showroom floor.

“If you pull the inventory out of a store, you can really deliver an experience,” Mr. Dunn said. “Rather than having people run around folding clothes and waging war against huge inventory, we can focus on the customer.”

Any compulsive shopper is already reeling at the thought of being robbed of their instant gratification, of the guilt and excitement that comes from walking down Madison Avenue bag-in-hand. But Mr. Dunn calls that contact-high with the shopping bag an illusion dreamed up by legacy luxury brands.

“The apparel industry has sold themselves on the importance of instant gratification,” Mr. Dunn said, “but our customer doesn’t necessarily want to carry around a product all day.”

Instead, Mr. Dunn wants to split that buzz into two sensation where there was only one before. There’s still an experience of shopping and buying—the lunchtime retail therapy moment—but then there’s the sudden rush and remembrance when the package is at your door. The instant gratification first, and then the moment of fulfillment.

Bonobos is just a front-runner in a new class of New York fashion and retail startups that skip wholesalers, middle-men and traditional distributors to offer artisan goods at competitive prices. You can get your dress shoes from Jack Erwin, a purse from Dagne Dover, underwear from Flint & Tinder, shorts from Chubbies and bedding from Brooklinen.

“They’re not really tech companies,” Jeremy Levine, a venture capitalist who sits on the boards of Shopify and Pinterest, told the Observer. “They’re fashion or apparel companies, and they typically find that internet isn’t a sufficient distribution channel on its own.”

These startups are untried territory for tech money, but venture capitalists are exhausted with Snapchat clones, selfie apps and mobile payment startups. “Smart money” is looking for new territory.

“As soon as something is popular, it’s too late to invest in it because the scene is so crowded with investors,” Mr. Levine said. “It’s much easier to build a wildly successful company when there’s no competition.”

Like any trend, this new model of physical stores comes with its own startup buzzword: “omnichannel” retail, which means that wherever people shop, you’re there— from stores, to phones and desktops. Everyone has their own novel approach to how to build a retail model from scratch. Warby Parker, one of the earliest ecommerce companies to turn VC heads, is very staunchly traditional—they push their product line and home try-ons straight from their 18 locations.

Others are content to ride on the wings of department stores; Baublebar, an online jewelry brand, played around with pop-up shops before teaming up with Nordstrom to put their jewelry in 35 locations. Without clunky real estate costs, Baublebar can afford to price their jewelry without dozens of markups. But in the world according to Etsy, bargain prices can be a red flag that you could be ordering costume jewelry junk.

“When you’re looking at a really beautiful image, the gut reaction, this is going to arrive as garbage,” Baublebar cofounder Daniella Yacobovsky told the Observer. “When customers touch the product, they understand the value and it immediately clicks. Then they come to the site.”

That tactical, personal relationship and trust still keeps people from shedding their favorite stores for online alternatives. Even trailblazing shoppers are likely to fall back on comfortable go-tos. This is where we get to other sinister b-word—besides bricks and mortar—that makes tech companies and investors cringe. “Branding.”

These companies want to meet their customers, attack their senses with fabrics and fragrances and develop lifelong relationships that a website can never deliver on its own. But like building stores, brands don’t scale well. The process of seduction and conversion that earns you the cultural cache of a traditional fashion label or apparel brand takes time and money, and can’t be measured in web traffic or quarterly earnings.

And why stop at the products you sell when you can offer extras like classes and treatments? Birchbox, the subscription box service for cosmetics, attempts to mimic in retail everything its makeup tutorial-obsessed devotees love about their site. Stepping into the West Broadway location is like getting sucked Tron-style into Birchbox.com. The displays match the type-face and design of their webstore counterparts and iPads are propped up for perusing the store’s digital catalogue. The curated collections change monthly with the theme of their boxes, and on the lower levels there are areas for salon treatments and classes in cosmetology.

“It’s incredibly valuable to have a direct line to customers every day,” Birchbox cofounder Katia Beauchamp told the Observer. “It keeps you focused and forces you to improve. We’re almost four years old—you don’t just create a disruptive product once and say to customers, ‘ride with us forever.’”

The first adopters have led the way for smaller ecommerce brands on the come-up. For Ryan Babenzein, the founder of Brooklyn-based sneaker brand Greats, opening a physical store has been in the crosshairs from square one. He’s already started his foray into physical retail with a profitable store he calls a “Fieldhouse” on the weekends. His vision for Great, which is the first ever Brooklyn-native sneaker brand, is to open their first location in Williamsburg. 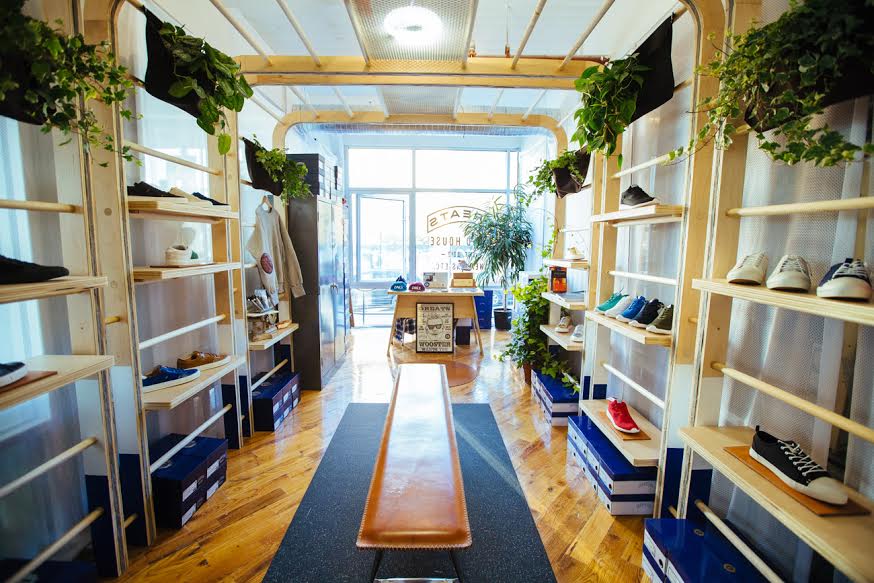 The Greats Fieldhouse in Williamsburg is more of a pop-up shop for now, but Ryan Babenzien is looking for more space. (Photo: Greats)

Not that they haven’t been successful online—on the hit mobile shopping app Spring, Greats is in the top 0.1 percent for brand performance. But Mr. Babenzien told the Observer that Greats needs the intimacy of neighborhood shops for the same reason Birchbox, Bonobos and Baublebar: you can’t build a relationship through the glowing screen of an iPhone.

“There was a time when Andy Dunn said he’d never open a store,’” Mr. Babenzien said. “Now he fucking says ‘stores are great.’ He had to learn that, because he wasn’t a brand guy.”

Before we left the Guideshop in SoHo, someone came in off the street in a huff. He was regular customer, and he needed some dress slacks. Khakis. And he needed them now. The clerk did a quick calculation in her head, and reluctantly rang him up. They could order an extra pair of whatever he takes away and it’ll arrive in a day or two, after-all. Even a store that sells nothing has to stay adaptable if it wants to keep customers who want what they want when they want it, however it ends up in their hands. 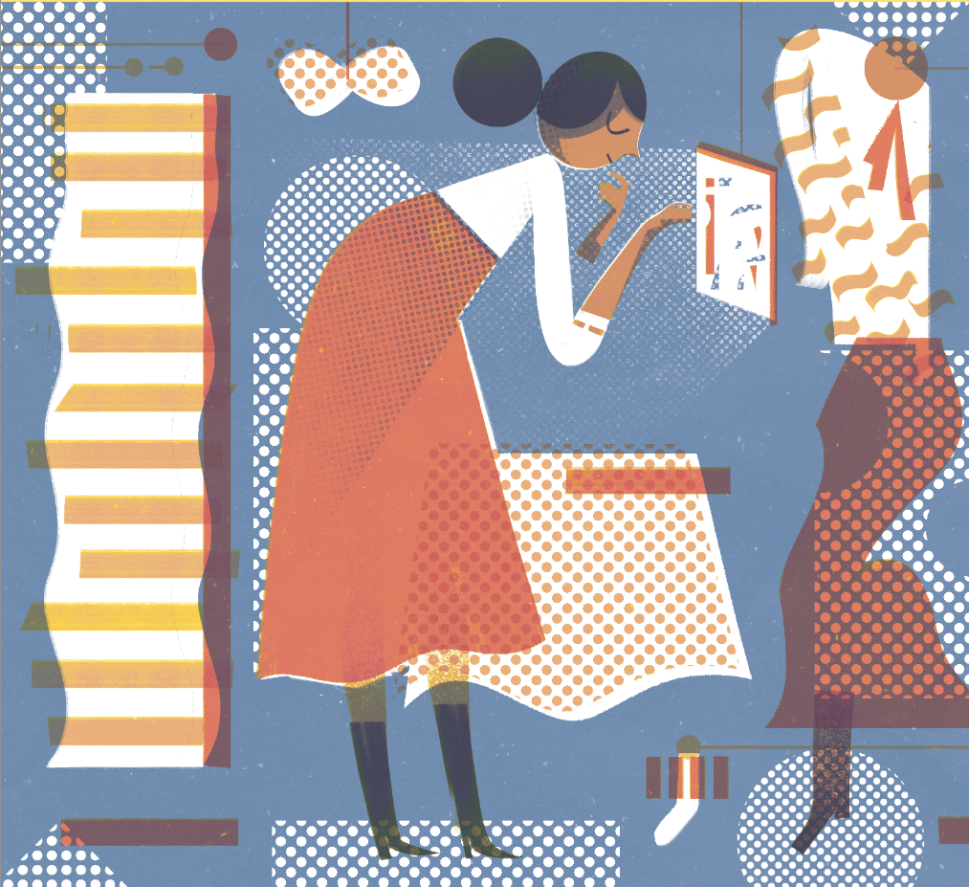