The United States Attorney’s Office for the Eastern District of New York, and perhaps other districts of the Department of Justice as well, have been running a secret docket for years. As the President submitted the nomination of Loretta Lynch to serve as the Attorney General of the United States—the country’s chief law enforcement officer—courageous lawyers are asking the Supreme Court to review a case that reveals how Ms. Lynch, her predecessors, and her prosecutors in the Eastern District of New York put cases on a secret docket that has allowed admitted criminals to walk free, deprived their victims of millions of dollars of restitution required under the law, and enabled the criminals to commit more crimes against the unsuspecting public.

The case is Palmer v. John Doe, #14-676, and the Supreme Court is scheduled to confer on the petition today—Friday, January 9. The Department of Justice has registered no response to the Petition. This isn’t the first time the Department has tried to kill something by silence.

At stake is far more than the issue of restitution of hundreds of millions of stolen dollars. There is a fundamental failure of the Department of Justice to protect innocent citizens from known criminals in a massive secret star-chamber for which there is no review or means of accountability. It is more government lawlessness and making its own rules as it goes— an unsupervised “cooperator game” at immeasurable cost to justice, faith and trust in the fairness of our system.

Hopefully, the Supreme Court will take the case and review this unholy practice, but regardless, the public needs to take a close look at the allegations in the petition, which the government has completely declined to address other than,as we saw with similar tactics that we recently reported on in the Moonlight Fire case, by wielding threats of reprisals against the lawyers who are trying to disclose the truth.

The petition reveals that prosecutors have a terrifying set of double standards and secret deals—one for “cooperators” and one for those who decline to cooperate. The cooperators in the cases on the secret docket are allowed to plead guilty and to go about their lives with virtual immunity for any crimes they continue to commit—and commit them they do. It’s one thing for a prosecutor to make a deal with a cooperator. It’s another thing for the deal to be a complete secret for years that enables the cooperator to resume his criminal conduct—not only licensed but protected by the government.

Another ramification of such unlawful secrecy is the unjust convictions that result when the truth of the deal and history of the cooperator are not disclosed to other defendants. Just ask the California man ordered released from nine years in prison after the Department of Justice admitted today that “thousands of pages of documents that should have been turned over to the defense had secretly remained locked in a Sacramento FBI office for years.” According to the Sacramento Bee, the defense attorney had demanded this evidence of the cooperator repeatedly and was told there was none—all the while, the FBI was hiding it. This is the same United States Attorney’s Office that brought the now notorious Moonlight Fire case about which the Observer broke news and others have written.

According to the Washington Times, Felix Sater’s lawyer asserts that Mr. Sater has been a model citizen during the 10 years between his secret guilty plea and his sentencing. That is a subject of serious dispute in the petition.

But the bigger concerns now are the knowledge, ethics, and policies of the proposed new Attorney General and the fact that high ranking members of the Department of Justice have played on role on both sides of Mr. Sater’s secret case in the Eastern District of New York. Assistant Attorney General Leslie Caldwell, head of the criminal division of the Department of Justice, was an Assistant United States Attorney for the Eastern District of New York during the year Mr. Sater was charged. Then, after joining Morgan Lewis, she represented Mr. Sater at his sentencing on the secret docket in her old district. That raises a plethora of ethical issues, but she’s not alone. The petition also discloses that Marshall Miller, principal deputy assistant attorney general in the criminal division was, ironically, the victim rights’ coordinator for the Eastern District of New York.

The Economist has recently written extensively about the world of cooperators and over-criminalization. The Wall Street Journal this week has joined our chorus on prosecutorial secrecy and misconduct, today’s being “Sunshine For Prosecutors.” Seems that the Journal’s editorial earlier this week helped the government to decide to produce some additional information to which Hank Greenberg has long been entitled. Sunlight is indeed a powerful and natural disinfectant, but we sense that we are merely scraping the surface of a deeply infected wound to Lady Justice.

The petition, filed in the Supreme Court by lawyers who have contempt charges hanging over their heads for revealing what they know, explains that the pretext for continued secrecy rested on nothing more than the prosecutors’ bald assertions of risk of harm to cooperator Felix Sater. The Russian mob is implicated, and any number of federal judges seem to have rubber-stamped the government’s assertions.

However, there have been repeated public disclosures that Mr. Sater was cooperating, and he was not placed in the witness protection program. Instead, the petition claims, the United States Attorneys allowed him to continue to bilk banks and individuals of millions of dollars. He was never ordered to pay restitution to any of his original victims, and worse, he was protected by the government in his crimes against new victims. Ms. Lynch has vehemently opposed release of the information that the Petition seeks to have unsealed.

The Senate Judiciary Committee, the Government Oversight Committee, and the Senate all have their work cut out for them. This evidence raises more troubling questions about our now ironically named Department of Justice and those who run it. Ms. Lynch must be held to account for this secret docket in hearings on her nomination. How widespread is the practice, and how many additional victims of fraud and other crimes has the Department of Justice caused by this practice? Surely Ms. Lynch’s district is not the only one to run a secret docket. Presumably, our Attorney General knows. Why are federal judges allowing this? How many criminals have committed additional crimes because of this perversion of the system?

We have written extensively about Eric Holder protecting corrupt prosecutors. This country can’t afford a new boss same as the old boss.

UPDATE: Representatives for Felix Sater dispute this story’s characterization of the value of their client’s information and his behavior since cooperating. Mr Sater’s attorney, Robert Wolf, told the Observer: “Mr. Sater provided extraordinary cooperation with the government, which spanned two decades and involved the most serious matters of National Security, battling our greatest enemies at tremendous risk to his own life and for the benefit of all citizens of our country. This cooperation extended to the highest levels of our government and involved some of our biggest enemies whose terrorism threatened our safety.” 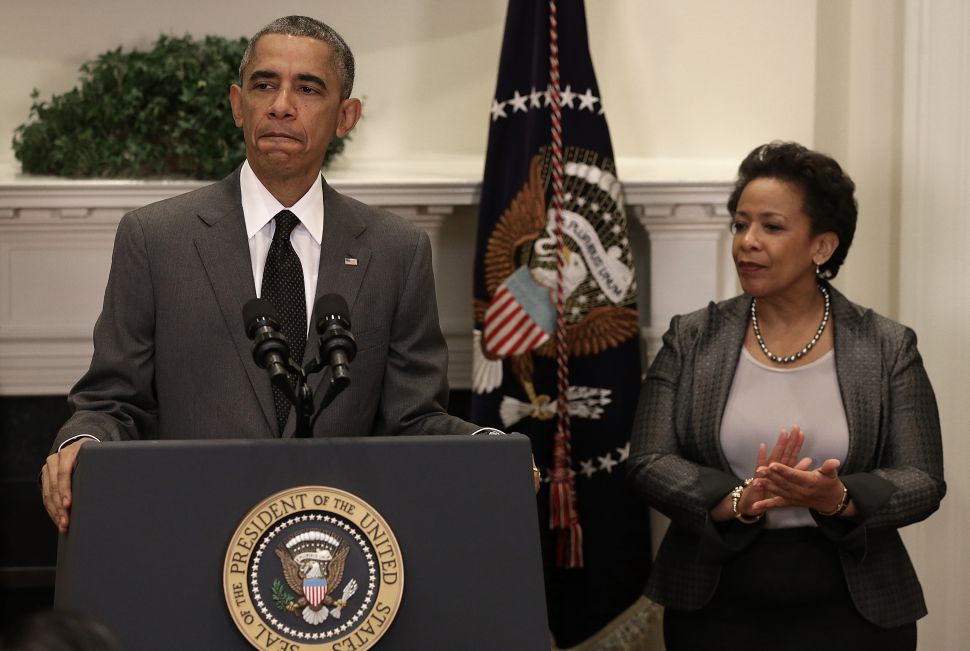