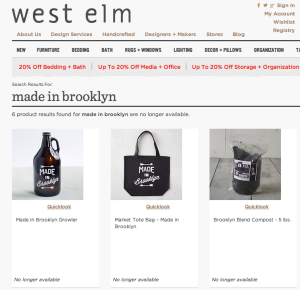 West Elm’s “Made in Brooklyn” line is now listed as no longer available.

Monday revealed that West Elm’s Dumbo-based store’s widely popular “Made in Brooklyn” line—ranging from beanies to t-shirts to growlers—was not actually made in Brooklyn.

While the online store cited it as simply “imported,” The Brooklyn Paper has, upon further inspection, gleefully revealed that West Elm’s $24 “Made in Brooklyn” beanie was in fact “Made in China.” A spokeswoman later confirmed that while the T-shirt and growler were made in the US, they too were not made in Brooklyn.

Vice president for brand marketing of West Elm, Abigail Jacobs, claimed to the paper, “The messaging on these specific pieces was designed to be a fun nod to the potential contents.” Ms. Jacobs continued, “You can fill the growler with lager from Brooklyn Brewery, and the shirt and hat refer to the person wearing them.”

In an effort to combat this appropriation, the president of the Brooklyn Chamber of Commerce, Carlo Scissura, introduced a certification program earlier this year called “Brooklyn Made.” The program gives companies with the “most Brooklyn operations” a gold star, according to Brooklyn Paper.

However, Mr. Scissura maintains that through everything, West Elm–which hails itself as “Born in Brooklyn. At Home in the World” in the “About Us” section of its website–still has an amicable relationship with the COC. “West Elm is a great friend and partner, and a big supporter of BKLYN DESIGNS,” he told the paper. 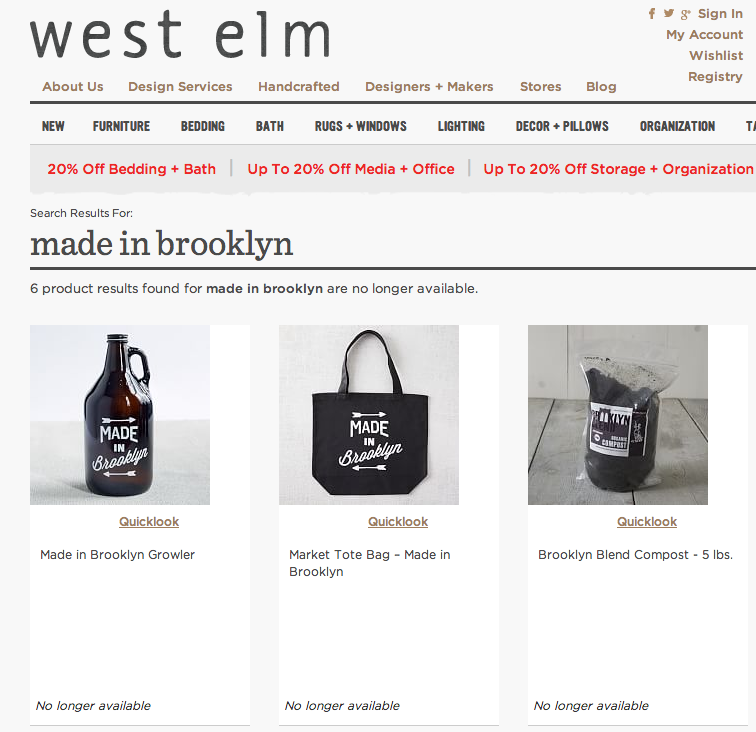 Filed Under: Politics, News & Politics, West Elm, Made in Brooklyn