Last month, Wall Street Journal culture writer Joanne Kaufman ignited a firestorm in the blogosphere when she confessed (or—depending on how you read her snarky tone—boasted) that she sometimes gets bored and walks out of plays for which she’s received complimentary tickets from press agents. She bolted from The Last Ship, for example, “up the aisle and out the exit, thrilled to breathe the sweet air of West 52nd Street.”

The fallacy in Ms. Kaufman’s point of view is, of course, that critics (or even “culture writers”) don’t go to the theater primarily to be entertained, but rather to study the show in question. Obviously, you can’t write authoritatively about Sting’s new musical when you’ve seen barely half of it; the Journal has higher standards than that.

My feeling of smug superiority to Ms. Kaufman lasted exactly one month, until I found myself agonizing through the Metropolitan Opera’s ghastly new production of Lehár’s The Merry Widow on New Year’s Eve. As the flatly staged and poorly sung second act finale droned on, I prayed for a smidgen of Ms. Kaufman’s chutzpah, or, failing that, symptoms of appendicitis—anything to get me out of the auditorium and away from this horrifically unmerry performance.

The problem is not with the operetta itself, a 1905 confection about Hanna Glawari, a fabulously wealthy widow whose compatriots from the insolvent Balkan state of Pontevedro are hoping she will marry a local nobleman to save the country from bankruptcy. The most likely candidate is her old flame Danilo, a playboy who once snubbed her when she was penniless. A bouquet of luscious melodies, including the celebrated “Merry Widow Waltz,” accompanies the working-out of the slim plot, as the heiress and the roué rise above hurt feelings and injured pride to admit a deep attraction.

Rather, the reason for the failure of this show at the Met is that everyone involved overlooked the slight but appealing psychological underpinning of the work in favor of slathered-on frills and frivolity. Director Susan Stroman’s production came to life only in a vigorous but dramatically irrelevant suite of can-can dances in the final act; for the previous two hours and change, everyone dutifully plodded through rote blocking in front of wanly pretty two-dimensional backdrops designed by Julian Crouch. With lavish but overly uniform costumes by William Ivey Long (the party guests looked like bridesmaids in a Downton Abbey-themed wedding), this show would have looked old-fashioned in 1950.

At least back then you might have had a real operetta leading lady to head the cast, a Marta Eggerth or a Kitty Carlisle. At the Met the role of Hanna is assigned to Renée Fleming, undoubtedly a superstar but miscast here in every conceivable way. Even the adjective in the title (“merry,” or, in the original German, “lustige,” which means something like “madcap”) was a misnomer. Onstage Ms. Fleming is earnest, prim, wistful—qualities that serve her well in suffering-virgin tragedies like Rusalka and Eugene Onegin. As Hanna, she set her teeth in a hard rictus of a grin and snapped her fan once or twice, but merry she wasn’t: more like Debbie Downer in a wasp-waisted corset.

The production served her badly, weighing her down with fussy costumes and the stiffest blonde wig seen on a New York stage since Hermione Gingold left the cast of A Little Night Music. In a show with a waltz in practically every scene, she couldn’t dance a step, and her voice in the lengthy spoken dialogue took on a harsh Midwestern grate.

Really glorious singing—Ms. Fleming’s stock in trade for the last quarter century—would go far toward redeeming so wrong-headed a performance. Alas, almost all Hanna’s music lies in an unflattering low register where the soprano produced more gasps than tone. Even in the genuinely golden part of her range, the shimmering area above the staff, the soprano sounded tentative and cautious. The haunting high B at the conclusion of the “Vilja” song never quite made it up to pitch, and an interpolated D at the end of the second act emerged a vibratoless squeal.

It’s not like she was shown up by the rest of the cast, though. As Danilo, Nathan Gunn blustered in a small, rough baritone, and Kelli O’Hara, the Broadway star, revealed a true but characterless light soprano in the role of the flirtatious baroness Valencienne. Opposite her, tenor Alek Shrader sounded tight and nervous as the countess’ Parisian lover. Ironically, the best singing of the night came from an artist with practically no singing to do, the veteran baritone Thomas Allen as the cuckolded Baron Zeta. At 70, he still commands a noble legato and crystalline diction.

That clarity wasn’t an unmixed blessing, given that Sir Thomas, like the rest of the cast, was saddled with Jeremy Sams’ witless English adaptation of the libretto. Bad enough that the spoken dialogue lumbered on and on with nary a joke to relieve the tedium, but the sung lyrics alternated between the cutesy and the downright inept. (No, Mr. Sams, “chanteuses” does not rhyme with “floozies.”) The Met orchestra sounded characteristically luxe under the leadership of Andrew Davis, whose tempi were uniformly ponderous except when he was following Ms. Fleming’s idiosyncratic phrasing.

In a show this disastrous, it’s difficult to pinpoint the absolute nadir, but I would nominate the interpretation of the comic embassy secretary Njegus as so stereotypical a flaming queen as to make Will and Grace appear a model of enlightened gender study. The comic actor Carson Elrod did about as much as could be done with this cringe-worthy material, but everyone else involved, from Ms. Stroman to general manager Peter Gelb, should be mortified to be presenting homophobic minstrelsy on the stage of the Met.

In case you’re wondering, no, I didn’t walk out of this Merry Widow. It was my job to stay until the very end. You, on the other hand, have the much more attractive option of avoiding this wretched mess altogether. 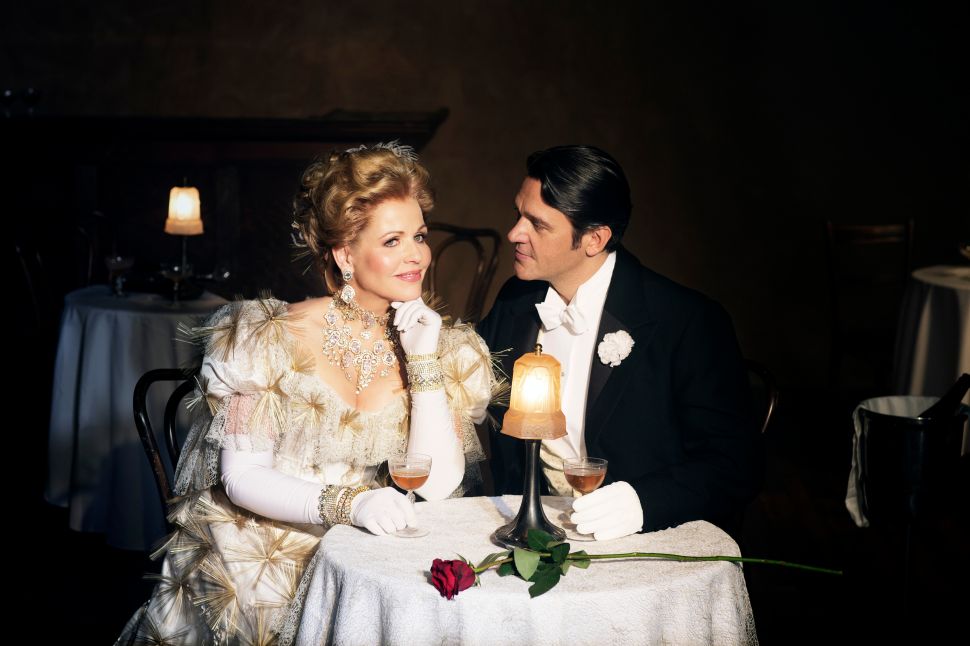