With his wry smile and italic timing, 5-foot-5 funnyman Nathan Lane is a tall order to follow in the comic cosmos. But that hasn’t stopped fools rushing forth in caps-and-bells.

The latest Lane role—the lead in Terrence McNally’s fizzy valentine to Broadway, It’s Only a Play—was filled, upon his departure, with much less fuss and feathers than usual. Somebody just crooked a finger at Martin Short to come in from the other coast and take over. He starts January 7 and it’s a savvy makeover. Both actors are in a beloved league of their own and can pull an audience into their corner by sheer force of personality.

That’s the quality their character, James Wicker, must have. He’s a sitcom actor who turned down an awful play his best friend wrote for him, and thus is secretly hoping it will fail. At its opening-night party, as they all await the reviews, he has taken refuge in The Lost Kingdom of Wishful Thinking—the posh bedroom of the show’s first-time producer.

Rarely has hell looked so chic. The kooky winter-wear of the rich and famous arrives in armfuls and gets dumped on the bed. Then, the play’s casualties—the zonked-out star, the producer, the director, the playwright—hemorrhage in, stunned and numbed.

As first to the scene and a quasi-friend of the court, Mr. Short administers witticisms and cynicisms throughout, sprinkling a little sympathy on the side. “You know, that character is on stage for the entire show,” he was quick to observe. “There are times when the focus is tossed to someone else, but the role is a challenge worth taking on. When you’re working ‘one-on-one’—whether it’s Fame Becomes Me or the concerts I do—it’s kinda just you, so that’s not the strangest feeling in the world for me.”

Most of the play’s cast is continuing on with Mr. Short to the end of the run March 29: Tony winner Matthew Broderick (who plays the playwright), Emmy winner Stockard Channing (the star), Oscar winner F. Murray Abraham (the critic) and likely Theatre Award winner Micah Stock (the hick coat-checker). In his baptism-by-fire Broadway debut, Mr. Stock is on stage the first 15 minutes with Mr. Short.

The newbie and the new vet delight in the interplay. “It’s interesting how you think in comedy if you do a character,” said Mr. Short. “If you try to be funny, you won’t be. Because the world is full of bizarre people who are sincere in their intent, that’s the alchemy of it all. Micah really nails that. He’s hilarious, but you believe he’s that guy.”

A full quiver of quips for the Broadway knowing is flying at all times, but all this zaniness has an emotional flip-side—a sad undertow that generally accompanies the slow sinking of a theatrical Titanic.

Mr. Short wouldn’t know about that from personal experience. He came to New York in three Neil Simon-scripted musical revivals practically with critical palm leaves. “You folk have been very gentle,” he demurred with mock “aw shucks” modesty.

The Goodbye Girl with Bernadette Peters in 1993 earned him a Tony nomination, and Little Me with Faith Prince in 1998 got him the actual award; in between, in 1997, was Promises, Promises, one of the best Encores! ever and infinitely superior to the subsequent 2010 Broadway revival. The last two marked Rob Marshall’s solo bow as a director-choreographer, and that wasn’t Mr. Short’s only fruitful collaboration.

“Christine Baranski and I had an amazing time,” he recalled, she as his bar pick-up pretending to be anything but at the start of Promises, Promises’ Act II.

Mr. Short hasn’t entirely escaped the glare of hostile critics, but he has to reach back a bit to find it. “I wasn’t exactly perfectly cast as Rocky in Fortune and Men’s Eyes in 1974,” he understated. (Rocky is the prison bully who brutally rapes his cellmate, and he played the part at the Aquarius Theatre in Hamilton, Ontario, when he was 24.) “I remember Gilda Radner came opening night, and she said to me, ‘Mort, do me a favor and never do something like this again.’ ”

Radner was not just speaking as a friend or critic but as a first-girlfriend (1972-1974). His second girlfriend, Nancy Dolman, was her understudy and sister-in-law to Andrea Martin. All three women and Mr. Short were part of the famed Toronto production of Godspell. Other alums: Victor Garber, Eugene Levy and Paul Shaffer.

She is also the impetus for his first book, just published by HarperCollins—a poignant, smiling-through sort of memoir titled I Must Say: My Life as a Humble Comedy Legend. “I think that you know when it’s time to write a book. You have a story to tell, maybe a little depth of perspective. You’re 64 years old. You can’t do it when you’re 90, and you couldn’t do it when you were 38. It just seemed the time.

“We had an amazing life together, and that’s what I kinda loved—people coming up and saying, ‘Oh, I loved Nan,’ or, ‘I wish I’d known Nan.’ We should never stop talking about these people because they zoom into our souls when they pass away. But you figure out how to deal with death. You have to because, whether you like it or not, the sun rises the next day and you have kids you still have to fly the plane for.”

Beyond the book and Broadway, Mr. Short has other irons in the fire. He contributes a loopy cameo to a cinematic  hallucination called Inherent Vice—Dr. Rudy Blatnoyd, a drugged-out dentist who is “also addicted to barely legal women—when I say 18, I mean younger”—and, by the time he swings by, he seems positively normal.

You can expect, also, that he’ll be punctuating his Broadway run with guest shots on the talk shows. He recently made a special fly-by at the Kennedy Center Honors in order to salute “my close personal friend for a quarter of a century, Tom Hank.”

He was actually trained to be a centipede of creativity. “It’s actually very Canadian-slash-very-British,” he contended. “The first seven years of my career were in Toronto with my first show, Godspell. My first American work job was an ABC series called The Associates with Jim Brooks. In between that, for seven years I did musicals, plays, Second City, television shows. I had television shows, and I hosted things—that’s what you do. You do cabaret at night, Shakespeare on the radio during the morning and maybe a jingle in the afternoon. Nobody says, ‘I’ll phone my manager to see if it’s a good idea.’ You just say, ‘Do I bring a suit?’

“It was like a university—that kind of level of experience. The more you do anything, the better you get at it.

“Eventually, you reach a point in your career where you’re not still struggling to figure out how to pay the rent—and you have even more pressure trying to figure out how to be interested in what you do. I’ve been doing this for over 40 years so why wouldn’t I just stop doing it? As long as it’s varied as it is, it stays interesting.” 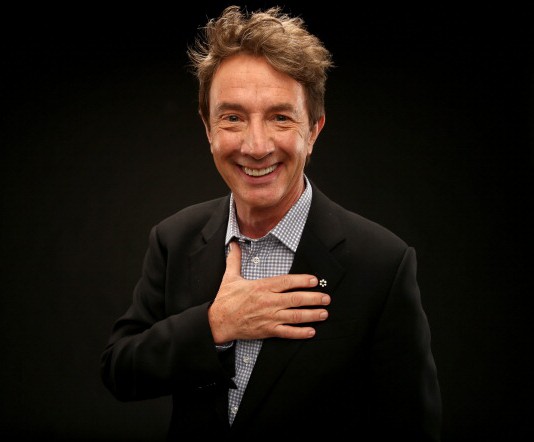 Filed Under: Theater, Nathan Lane, Martin Short, Plays, comedies, it's only a play,