TRENTON – While some observers of the New Jersey political scene were dismayed with the national references made by Gov. Chris Christie during his State of the State speech in Trenton on Tuesday, one former Garden State governor was pleased that Christie put a non-profit services program that he backs into the national spotlight.

“He’s doing something good. How many people are talking about re-entry nationally? I think he’s changing the debate nationally,” said former Gov. Jim McGreevey, noting that Christie’s speech, watched by both a New Jersey and a national audience because of the Republican governor’s 2016 national aspirations, could draw attention to the issue of how to curb recidivism, an issue that McGreevey has focused on in recent years. “Incarceration is a moral cancer in this nation. We have five percent of the world’s population, 25 percent of the world’s incarcerated population, with a 66 percent failure rate. It’s abysmal. Gov. Christie is speaking powerfully and directly to the issue, and he should get the lion’s share of the credit on the national platform for his willingness to bring this issue to the national stage.”

The initiative mentioned by Christie in his address emerged from a state-created task force co-chaired by McGreevey, the former Democratic governor, and Pastor Joe Carter of Newark’s New Hope Baptist Church. The program, which will be run by a non-profit led by McGreevey, is designed to set up one-stop service centers for ex-offenders battling addiction as they leave incarceration or drug court and re-enter society.

The centers, which will help ex-offenders get treatment, as well as find temporary housing and employment and training services, will be located in Newark, Paterson, Atlantic City, Toms River, Trenton, and Jersey City.

“I think the governor recognizes that we’re at an interesting tipping point in the national political landscape, recognizing that a two-thirds national recidivism rate is unacceptable, and that corrections is a $74 billion failed experiment,” McGreevey said. “It’s one of the few policy platforms nationally where Republicans and Democrats work collaboratively because of the failure of this expensive prison model.” 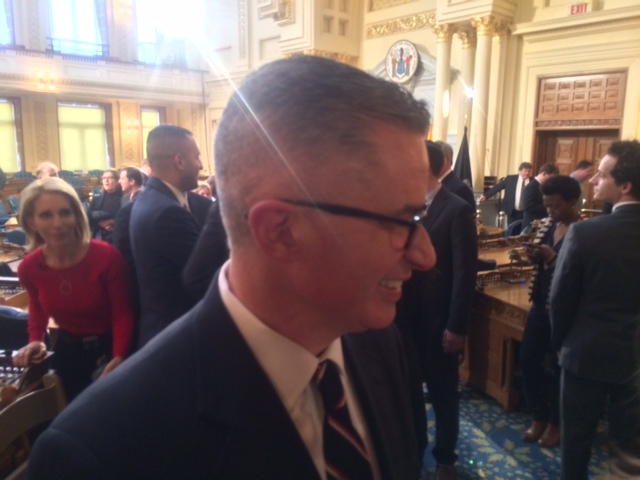