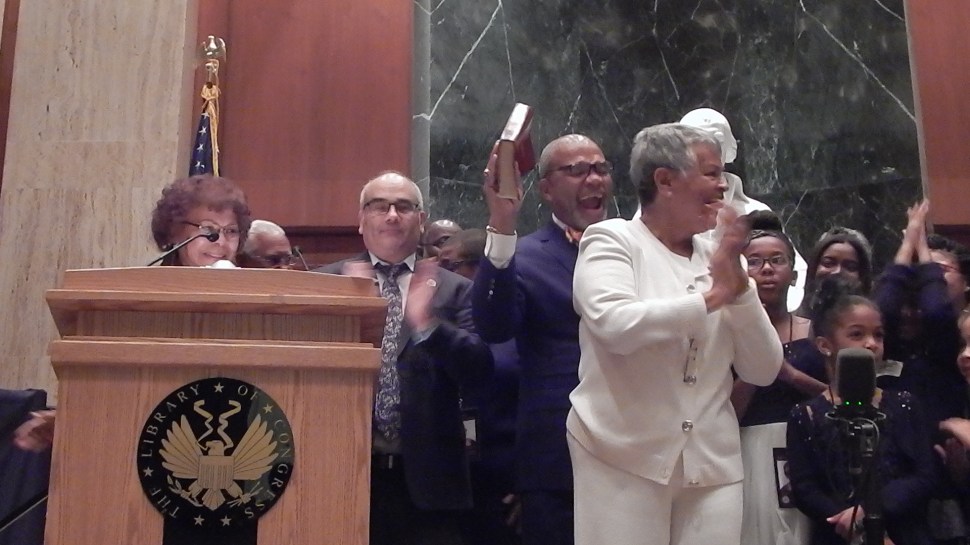 WASHINGTON DC — They hoofed it, bussed it, took trains and drove SUVs through early morning snow and Beltway traffic to see their political and, for some, spiritual leader enter into her next career phase, and “so help me God” they were going to do it — even if it meant holding two informal swearing-in ceremonies to make sure everyone got a glimpse of New Jersey’s first African American congresswoman with her hand on the Bible.

That was the overwhelming sentiment in the room as U.S. Rep. Bonnie Watson Coleman (D-12), formerly of New Jersey’s 15th legislative district, was sworn into office today, twice during informal ceremonies in the morning and afternoon and once, officially, on the House floor of her newest political chambers. Hundreds of teary eyed supporters and well-wishers were present throughout all three, gathered in the Library of Congress where the first and third ceremonies were held and where the second was beamed through TVs at the front of the room.

In the morning, near the sculpted marble statue of James Madison, Watson Coleman was sworn-in by Mercer County Executive Brian Hughes, with other Democratic leaders, such as Trenton Mayor Eric Jackson, New Jersey Democratic Party chairman John Currie, and House Minority Whip Steny Hoyer (D-MD) looking on. A choir from Shiloh Baptist Church — one of the departing points for a busload of supporters arriving late — gave voice to the excitement shared by those in the room. 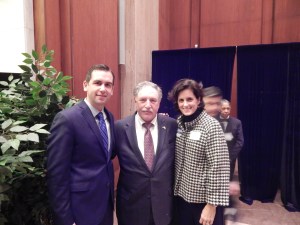 Held up by inclement weather and traffic, some supporters were delayed, however, so Watson Coleman returned to the Library after officially joining the 114th congress on the House floor to reenact the ceremony. There, she was sworn-in by former district colleagues, state Sen. Shirley Turner (D-15) and Reed Gusciora (D-15), this time with few new faces in the room looking on, including Jersey City mayor and enterprising 2017 gubernatorial candidate Steve Fulop.

Fulop said it was important to take part in Watson Coleman’s historic day, which concludes an 11 month campaign season and a 15 year career in the Assembly.

“I think it’s important to the delegation to recognize the accomplishment that Bonnie had over the last year,” Fulop told PolitickerNJ. She was a terrific legislator for the state, and I think the fact that she has busloads of people showing up in the snow speaks volumes to how people feel about her. It’s really exciting to see.”

Others echoed the feeling, including Turner, who called the day “bittersweet” in her introduction of Coleman.

With a wave of applause and enthusiastic cheers, Watson Coleman herself took the stage, first sympathizing with her supporters who made the grueling trip down through sleet and snow, and later laying out her vision as New Jersey’s first ever African American congresswoman. 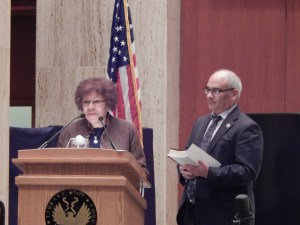 “My heart is filled with joy, I take this as an awesome responsibility,” Watson Coleman said. “I know it’s a tough time, I know just like our journey to get to this point was tough, and our journey even to get here was tough, but you have to continue to stay on the righteous road, and do the work and the will of the people.

“So we want to be the voice for the people who are voiceless,” she added. “We want to stand up for those who need someone to prop them up. We want to be there for minorities and women and gays and elderly and the poor and the disenfranchised. We want to make sure that people recognize that this is a country of immigrants, and that we need to treat them with decency and respect.”

But although Watson Coleman was undoubtedly the focus of the day’s events, there was also a certain concern for the future — particularly in regard to the gap the revered Democrat will leave behind in the Assembly. Mercer County Democratic Party leaders — many of whom were present today — have yet to select a successor to Watson Coleman, though a special convention is set to be held at the end of this month to elect a candidate.

Right now, that job looks like it could fall to Mercer County Democratic Chairwoman Liz Muoio, who announced her candidacy for the post in December and was also present at the ceremony today. Muoio, a close ally of the county executive, looks like the first in line to become Watson Coleman’s successor, following news that the district’s other frontrunner, Mercer County Freeholder Sam Frisby, was removing his name from consideration. 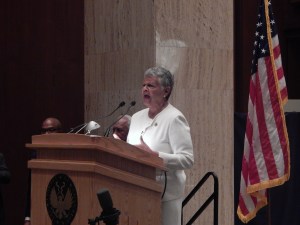 Throughout the programming, Muoio’s likely future running mates talked about the impending transition, both offering overwhelming positive reviews of Muoio and her track record.

With a successful special convention, Muoio would serve out the next several months in Watson Coleman’s seat before she would have to run in the Nov. 4th general election for a full term.

“Liz I think is qualified,” added Gusciora. “When I worked on Capitol Hill, she worked across the hall from me, didn’t even know. But she’s a graduate of Georgetown law school, she’s a good study, she’s passionate, and I think she’s going to be a great assembly member as well.” 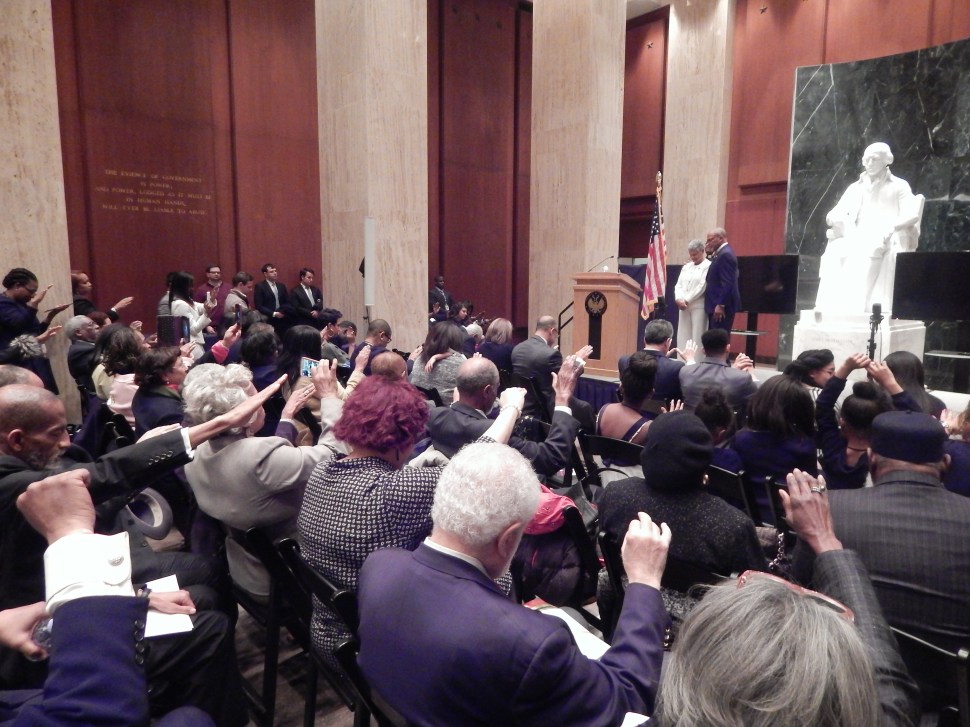 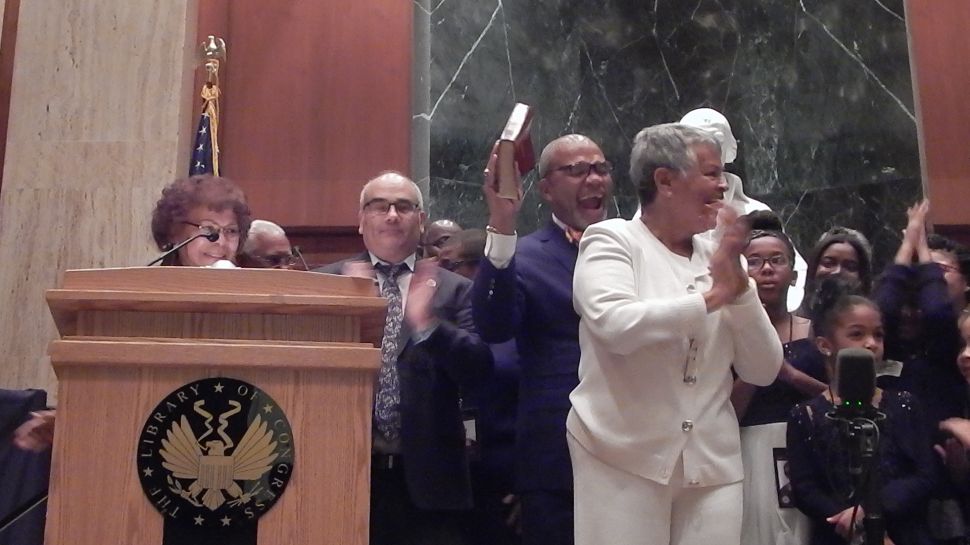