Artist Michele Pred is putting the fight for reproductive rights front and center in her new show. Using electroluminescent wire, she’s written pro-choice slogans on 48 vintage prêt-à-porter purses from the 1950s and ’60s in a series of new sculptures on view at Nancy Hoffman Gallery in Chelsea through March 14.

The Pred-à-Porter Pro-Choice series—a clever play on her own name and the original French phrase—are a direct response to Supreme Court decisions that have limited access to abortion and contraception. Each piece has text on both sides, and is meant to be carried—not shelved.

“Recent decisions by the United States Supreme Court leave no doubt that a woman’s right to choose is still under assault and that negative attitudes toward basic health care, like birth control, stubbornly persist,” said Ms. Pred in a statement.

Five percent of proceeds from “Choice” will go to NARAL Pro Choice New York, a non-profit that provides information and advocates for reproductive choice.

“For canvas, I chose purses as my way to marry the politically-charged messages of the Pro-Choice movement with representations of women’s modern economic power and the possibilities for change that come with it,” she added. “For me, the use of purses from the mid-twentieth century harks back to that critical era, and reminds us how much has changed and, more importantly, how much has not.” 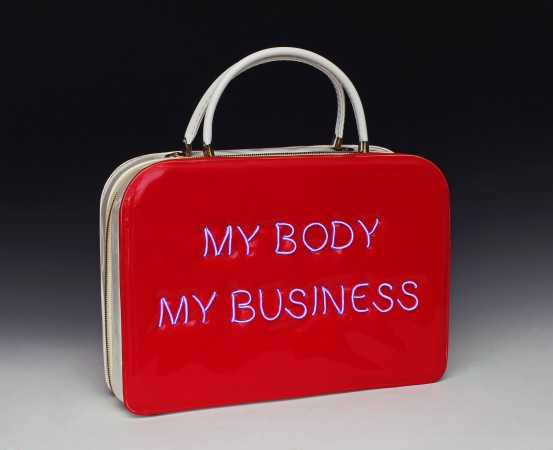